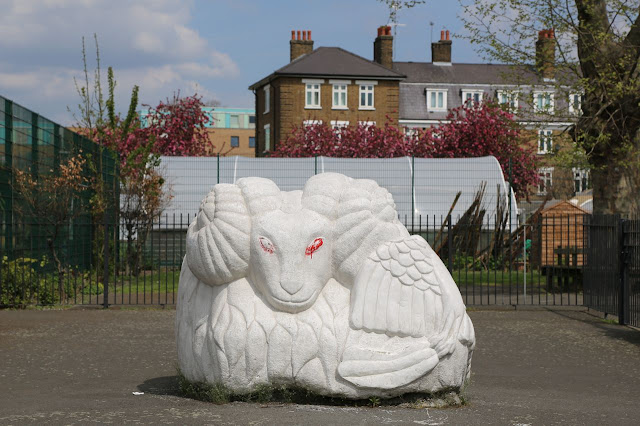 I've been calling this sculpture the "Satanic Goat" ever since I took this photo a couple of weeks ago -- even though it's a ram, not merely a goat, and the red eyes are clearly a vandal's afterthought. Turns out the sculpture by Paula Haughny is called "Ram and Magpie," from 1996. According to the web site Exploring East London:

This was one of the works which was commissioned under the Bethnal Green City Challenge. The sculpture, at Allen Gardens Playground, Buxton Street, was inspired by a pub by this name which had stood on this site in the early twentieth century. The block of stone was installed on the site and the sculptress carved it where it now stands. Buxton Street is named after Thomas Buxton (1786-1845), of the brewers Truman, Hanbury and Buxton, who became an MP who campaigned for Prison Reform and abolition of the slave trade.

More interesting than what's going on around here at the moment, anyway. I am still tired and it doesn't help that the dog woke me up at 5 a.m. squirming to go outside.

Yesterday Dave and I spent the afternoon watching "Cloud Atlas," which I really liked. I'm surprised it didn't get more traction in theaters. It was much easier to follow than I feared it would be, given the complexity of the storyline, and visually it's a beautiful movie.

If you're at all interested in geography, landscapes and cultures, try this online game called GeoGuessr. I am not a video game person at all, but a blog pal turned me on to this game, and it's actually really fun. You're given a random Google Street View image from somewhere in the world and you have to guess the location. There are five rounds in each game, with points awarded depending on how close you get. I can almost always get the continent right, at the very least, and often I can get within a few hundred kilometers. Once I was within a single kilometer -- when GeoGuessr showed me the start of the Seven Mile Bridge in Marathon, Fla. Now that's a spot I know by heart!
Posted by Steve Reed at 6:03 AM

Will have to check out both of those, though I don't promise to get much right on the game, but will see. I too am tired today. That two mile trek after being sick might have been a bit much. I hope you get some rest.

I believe that on the whole, Europe does a lot more to ensure that people's lives have some very nice art in it than we do here in the good ol' USA. Which makes me sad for us.

demonic ram perhaps. too bad. I hate to see outdoor art vandalized. I do love street art though on the sides of buildings.

I have a question:

How do I remove dead blogs from my reading list?

There are several, which when I visit, blogger says the blog has been removed, so I cannot go into the following widget and simply stop following...

I like the red eyes actually, gives the sculpture more street cred...
in answer to what is wrong with the puppy?- He was born with a rare kidney condition, must have low protein diet and forced liquids- which I did do but he was on the verge of another infection! Only 8 months old and has an ancients pair of kidneys. sad.His people are the same folks who had Dexter's twin brother who recently died of a rare lung cancer- the "dad" person is a veterinarian- ironic, yeah? Loved your tale of "in the kitchen"...I do not know foodie foods, but I do know washing up and the never ending stack! Good job (pats you on the head)

Yikes, that sculpture creeps me out somewhat. Red eyes and all.

I had not heard good reviews of Cloud Atlas at all, so I found it interesting that you liked it as much as you did. Some called it "ponderous."