Chopping, Slicing and Washing Up 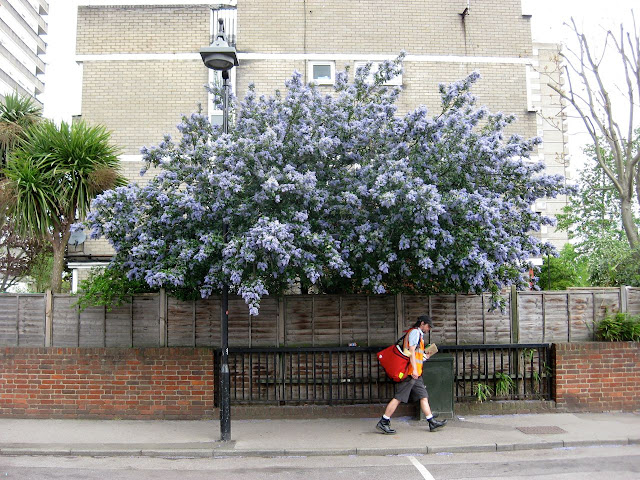 This morning I feel like I need to prop my eyelids open with toothpicks. (Or maybe something softer. Q-tips?)

The school where Dave and I work had a fundraising auction a couple of months ago. You may remember that Dave, while a teacher during the day, is also a trained chef, and he offered a catered dinner party as an auction prize. Yesterday he, his coworker Gordon and I spent the day working in the shiny white kitchen of an upscale Marylebone apartment to prepare a seven-course meal for six people.

First, the apartment: It was huge by my standards -- two living rooms, a large central foyer where at one point the children in the family were kicking a ball around, and bedrooms and bathrooms off to the side. (I didn't see those.) I felt like I could wave to Madonna across the courtyard -- she owns a house in Marylebone. It's that kind of a 'hood.

Gordon and I helped prepare the food as sous chefs, though to be honest I mostly washed dishes. That's probably my real talent in the kitchen! I've always enjoyed dishwashing at home, but last night I got a glimpse of how frustrating it would be to be a commercial dishwasher. The damn things just kept coming. I'd wash something and before I knew it, it would be back in front of me again, having been used by Dave or Gordon for some other kitchen task.

In the middle of all this, I had to run back home yesterday evening and walk the dog -- who of course had eaten lots of sticks on her recent outings to Hyde Park and the Grand Union Canal, and was thus having more digestive issues.

Never a dull moment, I'm telling you. But the dinner party seemed to turn out great, despite an oven with complicated knobs that we didn't quite know how to work, a torch for the creme brulee that ran out of fuel at the critical moment, and a strange cooktop that Dave described as "a piece of sh*t." (Surprising in that house, but I take his word for it.) The diners seemed thrilled, and that's what matters.

(Photo: A postman and a flowering bush -- big enough to require a wide-angle setting on the camera -- in Notting Hill.)
Posted by Steve Reed at 8:04 AM

It CAN be daunting to cook in another's kitchen. But an adventure, too. And there is something very satisfying about figuring out how to make it work.
Now the glory of that photo (which I love) is the way the postman is looking down while walking underneath one of the most amazingly beautiful displays of flowering I've ever seen. How can that even be possible?

I love Ms. Moon's observation of your beautiful photo. And your account of dishwashing while Dave cooked made me giggle. As you might know, I'm married to a chef and therefore have no illusions of the job as being glamorous!

Such beautiful surroundings and that postman is too intent on something else to take them in...
I hope you can get a nap in today.

Hey Steve, trying to play catch-up here after a weekend at the Jersey shore.

YUMMO! The dinner sounds divine. I hear you on being the "cleaner-upper" person. We did a similar thing years ago when Rick worked for HP. We raffled off a dinner for United Way and hosted the dinner at our house. Rick cooked the five or so course dinner, I waited "the table" and we also had an extra person who helped me wait table and also drove the the people who won the dinner to and fro. It was always hectic and exhausting, but well worth it. We did this two years in a row and the same person bid the highest both years, much to our disappointment! :)