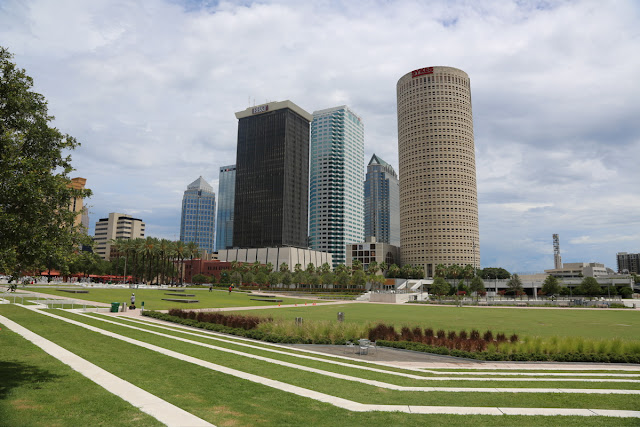 Unfortunately, my timing on this visit is not great, because today I'm going to my dad's house to spend the remainder of my trip there. So mom and I celebrated yesterday, a day early.

We started with lunch at Oxford Exchange, a new restaurant near the University of Tampa. It's supposed to be modeled on fashionable London clubs, though honestly if I hadn't read that on the web site I don't think I'd have realized it visiting in person. (I may live in London, but I don't routinely hang out in fashionable clubs!) We wandered through the shops before sitting down to a club sandwich (mom) and salmon tacos with lime juice (me). 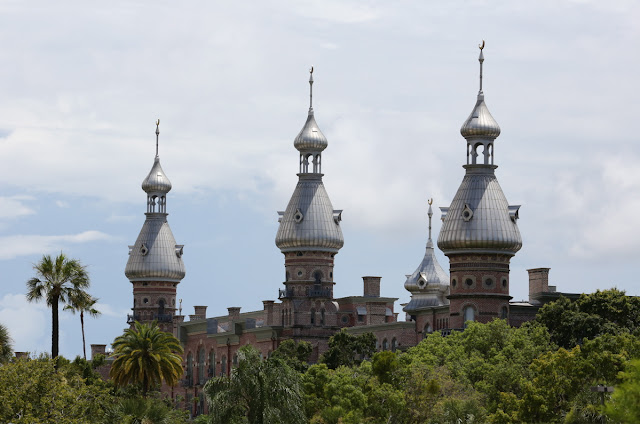 Then we drove across the river to the new Tampa Museum of Art, which was recently rebuilt and modernized along with Curtis Hixon Park (top). From the pedestrian walkway along the river I shot a series of pictures of the old Tampa Bay Hotel, the most famous and symbolic building in Tampa, and its ornate minarets.

At the museum, we saw a series of photos by Michael Eastman taken in Havana, Cuba. They were unbelievable, wall-sized images of moldering, dilapidated interiors and colorful, crumbling architectural details. I can't rightfully compare my photos to Eastman's, but he seems drawn to the same kinds of urban grit that I love so much. I really, really loved those photos in all their crisp, minute detail. I was both inspired and envious! 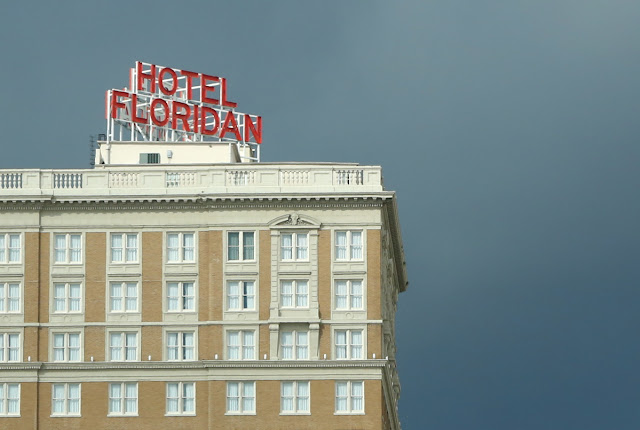 Finally, we walked over to the 19-story Floridan Hotel. When it was built in 1926, it was Tampa's tallest building, but for virtually my entire life it has been either a flophouse or a vacant hulk. After years of empty proposals and promises by a series of developers, the Floridan was recently purchased and remodeled, and it's open for business once again.

I've long been intrigued by the Floridan. I vividly remember one afternoon in the mid-'80s when the building caught fire. I was working in a downtown newspaper office, and when we heard the call on the police radio my boss sent me out to see whether the fire was newsworthy. I rounded the corner at Florida Avenue, looked north and saw flames pouring out of the lower windows. I ran back to the office and breathlessly said, "Call a photographer!"

Well, by the time we got back to the Floridan, the fire was pretty much out. I felt stupid. Should've had my camera!

Yesterday, mom and I stopped by the lobby bar and had a drink. The hotel is nice inside, with marble floors, a colorful restaurant ceiling and a soaring lobby, but it wasn't exactly bustling, so I'm a bit concerned for its future. Then again, it was a summer weekday afternoon -- probably not exactly a peak time for activity.

In addition to the day out with my mom, I had breakfast with my friends Suzanne and Sarah, and dinner on Wednesday night with my friend Sue. I've been busy socializing and reconnecting. Time to spend a quiet weekend with my dad and then catch the plane home!
Posted by Steve Reed at 11:54 AM

There is little that makes me happier than an old landmark hotel being restored instead of torn down. I wish the Floridan much success.
The first rock concert I ever went to was at Curtis Hixon Hall. Cactus- some early seventies super group. I wonder what happened to them.

And happy birthday to your mama!

you are/have been busy busy.

Wonderful holiday you are having and such GREAT shots of Tampa! WOW. I love how the light/colour is so yummy - like Venice, sort of, most certainly brighter than London or the PNW. Glad you are re connecting - Always nice when that works out. I hope Olga is not going out of her mind with yearning.

Happy birthday to your mom! Sounds like you had a nice celebration with her.

Hah, Ms. Moon! My first rock concert was at Curtis Hixon too with a completely forgettable boy! ;)

I keep thinking they spelled the Floridan wrong. Shouldn't they have called it the Floridian? Maybe not.

Great pics, and what a beautiful russian-esque building the Tampa Bay Hotel is!

How funny to go to a posh London club ... in Forida!

Ms. Moon: I agree! Have you seen the refurbished Terrace Hotel in Lakeland? That was also a vacant hulk for decades, but it's beautiful now. I gotta say, I do not remember Cactus.

Ellen: Yes, we have!

Linda Sue: The light is definitely brighter here. It's almost TOO bright, especially for my fair London complexion. :)

Lynne: So what band did you see at that concert? I saw the Nutcracker at Curtis Hixon in the third grade. But the hall has been gone for decades, torn down and replaced by this park and the convention center near Harbor Island. The spelling of the Floridan has always been a debate, and some people DO call it the "Floridian," but in my book that really brands a person an out-of-towner. :)

Reya: Isn't it weird? London is following me!