E and I Go To Ybor 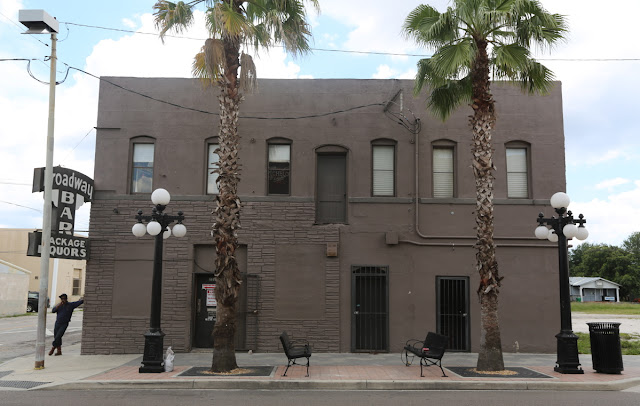 Yesterday I met up with a friend from college who goes by the nom-de-blog E. She wrote me a couple of weeks ago that she wished she could get out more to do photography. She has some mobility issues and uses a wheelchair, which makes it a challenge to get around.

This week her condo is being tented, so I met her at the hotel where she's temporarily living, and we piled into my dad's pickup truck to go to Ybor City, Tampa's historic Cuban and Italian quarter. 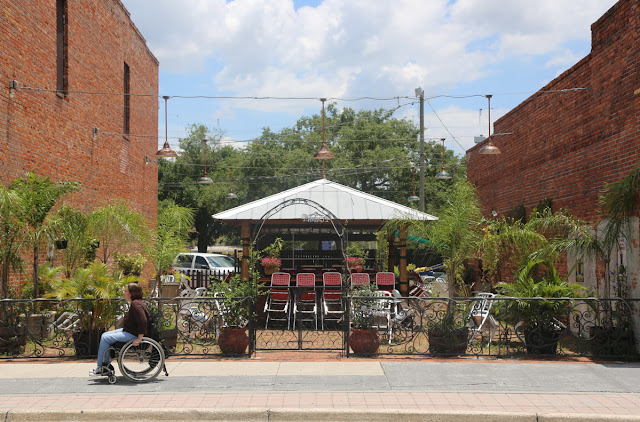 We had lunch at a streetside restaurant where I ordered, naturally, a Cuban sandwich, and E got a bright green citrus-pinepapple-spinach juice drink with her fish tacos. Then we went up and down Seventh Avenue, the main drag through Ybor (pronounced EE-Bor), which is lined with bars, nightclubs, vintage stores and other businesses.

I spent a lot of time in Ybor when I was in my 20s. When I was a child it was a downtrodden business district, but it gradually became the center of nightlife in Tampa -- still is, I believe -- and the site of many municipal celebrations like Guavaween. I went to my first gay bar, the long-defunct but locally reknowned El Goya, on Seventh Avenue in the mid-'80s. 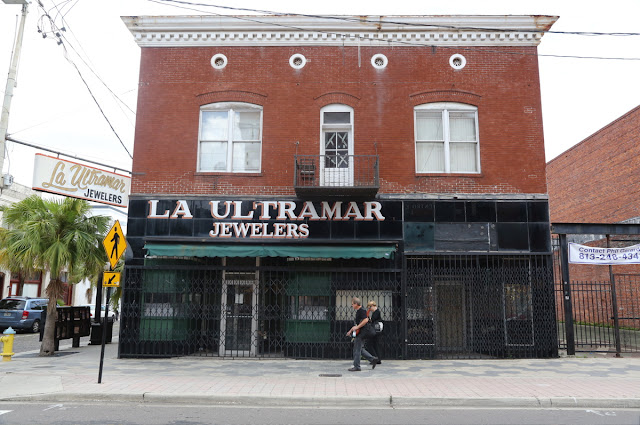 E often writes on her blog about how hard it is to get around town in her chair. Not only must she arrange for transportation, she also has to deal with uneven pavement and other obstacles that the rest of us would never notice. Being with her was eye-opening in that regard.

I assumed that if a sidewalk has curb cuts at the corners, a wheelchair would be able to navigate them. But curb cuts are often ridiculously steep or rough, and sidewalk slabs that don't meet evenly can bring a chair to a dead stop -- even with a second person pushing.

Also, businesses can be a bit clueless about access. We went to a frozen yogurt shop where a sign at the front door promised disabled access at the back. So we went to the back, only to find locked, blank metal doors with no signs and no apparent method of entry. We knocked; no answer. We had to return to the front door to get inside; I lifted E's chair over the front stoop, but only after getting the wheel caught on a doorstop. 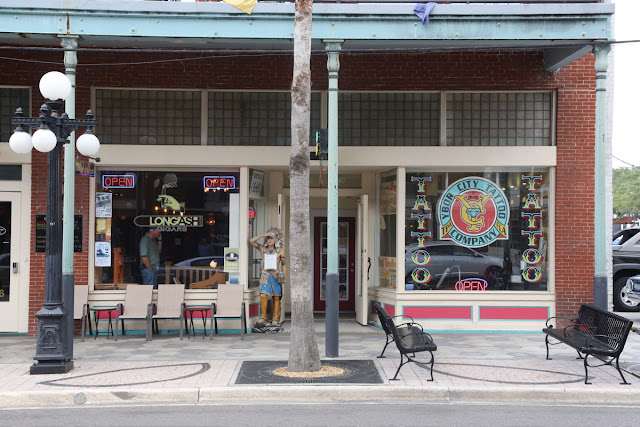 After Ybor, E and I drove a short distance to downtown Tampa to explore Franklin Street, which used to be a pedestrian mall but has been reopened to car traffic. The small-business scene downtown did not look that prosperous. We saw the building where I worked in my first newspaper job in the mid-'80s and stopped at a coffee shop for some fabulous Cuban-style cafe con leche.

Downtown, our access issues continued. Don't even get me started on train tracks embedded in streets. Sometimes E's chair rolled over them effortlessly. Sometimes they were a virtually impassable, and even risky, barrier.

Despite access challenges, and the fact that E's camera battery died a short time into our outing, and the relentless heat, we had a good time overall. Thank god for cafe con leche, which makes everything right, as far as I'm concerned.
Posted by Steve Reed at 12:26 PM

How awesome that you and e got to spend the day together! I didn't realize she was from Tampa. And what an eye-opener about access. Most of us have no idea.

most of us don't have any idea how hard life can be for the disable. thank you for sharing ... i am among those who never give this a thought.

It sounds frustrating, but I'm glad you got out there anyway. The pictures are fabulous.

we never give our legs a second thought until we lose the use of them.

When I used to take my friend Joanne out to eat each week I had my eyes opened about accessibility. One place she loved to go had good sidewalk access - but getting in the door of the restaurant was hard. And people would just watch as I struggled to push her through. VERY annoying! And I just had to deal with it once a week.

So hat's off to E - I hope you're raising a ruckus when it gets too difficult.

I have never been to Ybor before but it looks fascinating! Didn't they have cigar factories there too at one time? At least I think I remember that from my life in Florida ...

I'm glad you had a good outing despite the heat, dead camera battery for E, and navigation issues. It must be very frustrating for her.

When are you homeward bound?

Fantastic photos, and I'm so glad that e could educate another person (and now you've done the same by writing about it) about access issues.

I felt so privileged to travel along with you both, old friends, both of whom I'm glad to know here.

I was somewhat handicapped for about a year when I broke my foot and it refused to mend. It gave me a totally different perspective on what the handicapped person faces everyday. And it's not just barriers of access and travel...I was amazed to find out how many people I annoyed because I could not move fast enough. In fact, I was so outraged by my treatment, I wrote a short novel to the local newspaper that made 'letter of the week.' Well, that gave me some satisfaction. Truly enjoyed this post!

Here via e. You know what made me aware of the sad state of many curb cuts? Pushing a baby in a stroller. It's just wrong that so many places don't allow for wheelchairs. When we had doors put on in our office, we made sure they were extra wide.