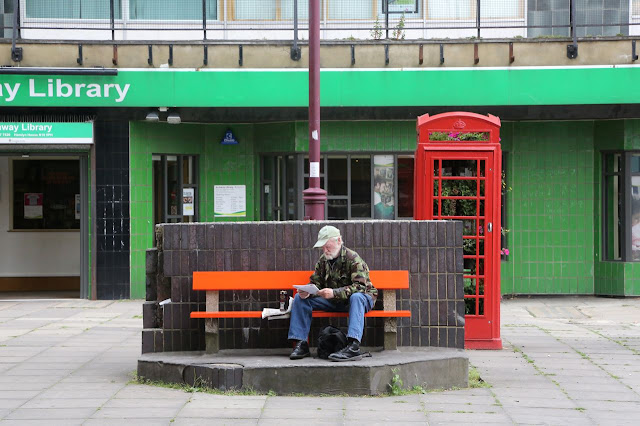 Yesterday I went to see the Patrick Caulfield exhibit at the Tate. Remember how I saw his headstone in Highgate Cemetery? That was the first I'd heard of him, but I'm glad there just happens to be a museum show now featuring his work. It's great stuff! Colorful, with strong, simplified lines and interesting perspectives and awareness of light.

For example, there's his painting Happy Hour, which defines major objects within the painting -- a bar, a roofline, an awning -- with colorful patches of light and shadow. The objects themselves are barely outlined at all.

In Window at Night, a window seen from the outside glows with light from a hanging lamp, a hint of a houseplant on the windowsill beneath. It imparts the same sense of mystery and curiosity we often feel (well, I do, anyway) when walking past someone's window on the street. I love the simplicity and slightly skewed, upward-looking perspective.

And how about the large, muted painting called Dining Recess? That lamp hangs in the center like a sun -- and again, the perspective is interesting, not straight-on but looking into the alcove slightly from the side.

The exhibit page highlights a few more of his paintings. I also like Café Interior: Afternoon -- the raking light and bright colors are terrific.

I'm glad that a visit to a cemetery introduced me to this artist!

It was also great to get away to an art museum. I love art museums -- the white walls, shiny bare floors, the austerity. That kind of simplicity and minimalism has long appealed to me -- you can see it in the decor of my old apartment in New York, though obviously not taken to that extreme.

I remember buying several decorating magazines in the 1990s featuring apartments that were ridiculously bare -- maybe a high-end mattress on a polished concrete floor and some carefully color-coordinated clothes hanging in the closet, and that's it. Is an apartment like that really liveable? I wonder what it looks like today, 15 years later? Probably full of Legos.

I remember buying an issue of Elle Decor (how gay is that?) featuring a guy whose apartment was bare except for bookshelves -- he said he only cared about information. I wonder where he is now, with the advent of the Internet? He could be living in a cupboard!

(Photo: Reading near the Archway tube station, North London.)
Posted by Steve Reed at 7:32 AM

As an artist, I'm against minimalist interiors. I look in those magazines at spaces by designers and wonder 'where is the art?'.

I am the opposite of a minimalist. Is there such a thing as a maximalist? If so, I am one. I like being surrounded by interesting objects.

Lovely mix of colors in that photo!

I like the artist's work. And, like you, I always wonder about the lives of the people behind windows.

Thanks for introducing me to this artist. I enjoyed looking at his work through your links.

I looked at a couple of his other pieces & decided that I like "After Lunch" best - probably because it looks more like what it is instead of a minimalist representation. Ha! But I like the colors in the other pieces.

That guy is now living in an airport pod in Moscow, or in one of those tiny apartments in Tokyo.

I really love those paintings. Thanks for introducing me to his work.

Before I moved my practice into the chateau, friends told me I had to put more stuff out - on the walls and such. I, too, love the open space - within limits.

I loved your NYC apartment. It was comfortable but the energy felt light and flowing.

Have a wonderful time in Barcelona!

Once I moved and the cable guy came and he said "When is the rest of your furniture coming"? And I said "It is all here"...lol. love a clean looking space!