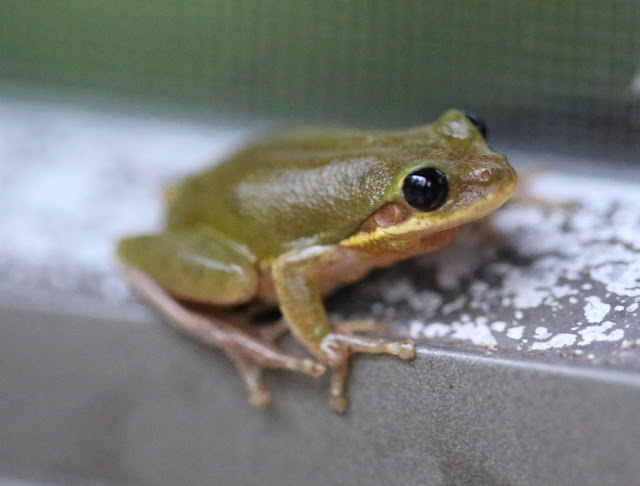 When I woke up this morning (at 3:20 a.m. -- ah, jet lag!) I wondered, among other things, how on earth to illustrate today's blog post. I hadn't taken any photos in Florida since landing yesterday afternoon, because I was busy doing family stuff.

But then, a few hours later, just as the sky was getting gray with light, this little green tree frog obligingly appeared outside the living room window. 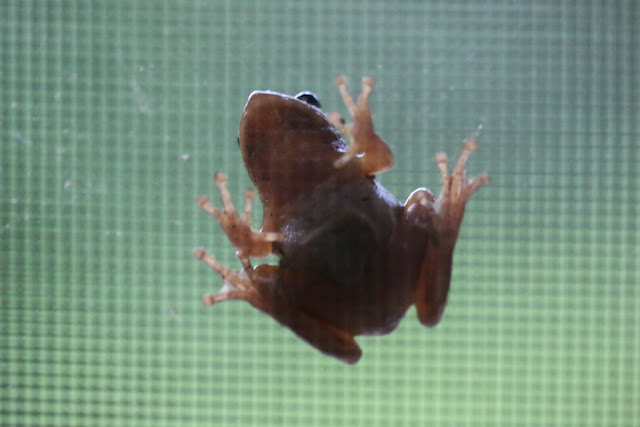 These little guys (and gals, too, obviously) are everywhere in Florida. My photos are a bit blurry because there wasn't much light and I was using my macro lens, but they will have to do.

So, yes, I arrived safely, after a flight that saw me devour three issues of The New Yorker and one of Harper's, plus part of another novel. Man, I can get some reading done on a plane. My fellow passengers were annoyed because many of the seat-back televisions weren't working, but I was fine with that. (My plane seemed to have a couple of annoying electrical glitches, which I hoped wouldn't bring us down somewhere over Bermuda.)

I sat next to a guy who started the flight being quite chatty, which made me nervous. I am not a plane talker. I want to just be quiet and do my thing. Happily, he became absorbed in writing out equations and drawing strange diagrams reminiscent of protractors on a napkin. (He was an electronics guy. I suppose he was working out some kind of work issue. I was glad I was not inside his brain.) Then he fell asleep. 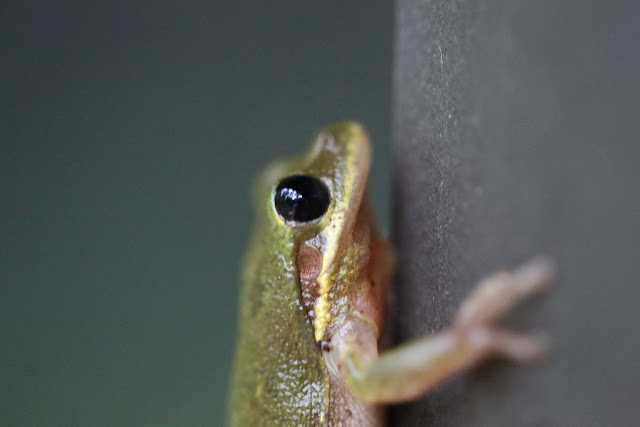 I've been in touch with Dave pretty constantly about Olga. She's back at the vet this morning and they're going to do another imaging test -- this time an ulstrasound -- to see if they can find the stick inside her. I'm beginning to wonder whether we should have taken her to the vet at all. Maybe we would have been better off just letting her pass it on her own. All this poking and prodding has definitely aggravated things and made her feel worse. In any case, maybe they'll see it this time and then we can decide what to do. She still isn't eating but the vet is giving her fluids. 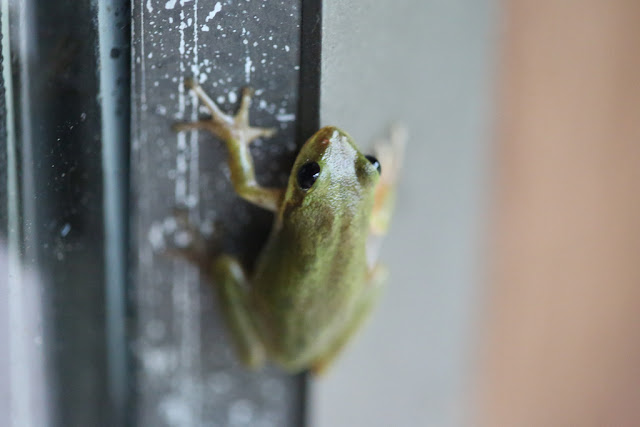 It's hard to be here and simultaneously be preoccupied about a dog on the other side of the ocean.

I went to dinner with my dad, stepmother, step-grandmother, stepsister and nephew last night. Linguini with chicken. Meh.
Posted by Steve Reed at 12:47 PM

I've been waiting for you to post something. The morning just wasn't the same without you to read with my first cup of coffee.

Glad you had an uneventful flight.

I'm also glad for the update on Olga even though so far the news is so far inconclusive. I hope they figure it out! You were right to consult the vet, it doesn't appear that she could pass this stick on her own. Maybe it's not a stick? Maybe a piece of toy? I've seen dogs ingest things as much as two weeks in advance before it starts to bother them.

The frog pictures are beautiful! Artful.

I too am glad you are not inside the head of the guy on the plane. Wow.

I love the little frogs! We have them here, I hear them singing at night, but I don't see them very often. In fact hardly at all. I do see toads though. I fished one out of the water lily pond this morning though I'm sure he could get out on his own, otherwise I would have dead toads floating in it all the time.

It is probably a good thing that you did take Olga to the vet. Sometimes stuff gets wedged in there and can't be passed. Hopefully they will see it this time.

Owen has been catching those little green frogs on my porch and taking them outside for me all day.
Welcome to Florida!
I, too, am hoping that Olga will be all fixed up very soon.

Wow...Poor Olga...I'm glad you were able to sleep on the plane...So sorry about the mediocre dinner. I hope it wasn't at someone's home.

What a cute frog - sure beats the wildlife here. Can't wait to hear more from your trip :)