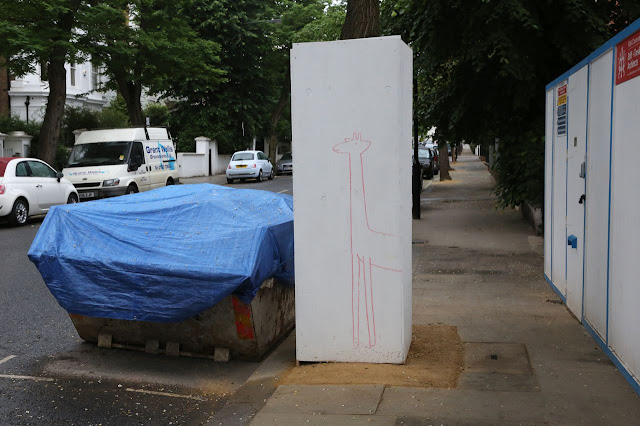 I'm starting to get into travel mode -- thinking about the stuff I need to wash and pack for Florida, setting aside my handful of American coins and my passport, charging my camera battery, that kind of thing. Before I get on that plane tomorrow, though, we still have a few things we need to do around here.

For one thing, we need to take Olga to the vet. I believe, as a blog commenter predicted a few days ago, she has finally swallowed a stick that her body is not able to expel. She's remarkably unfazed by it, all things considered -- she eats and drinks (though less than normal) and jumps around when excited. But overall she's a bit more lethargic and we can tell something is bothering her. Hopefully it won't require surgical intervention.

On a happier note, we want to go see "World War Z," which has been getting surprisingly good reviews. David Denby from The New Yorker was very positive about it -- he called it "the most gratifying action spectacle in years." So we'll try to duck into a theater and see it sometime this afternoon. I am not a zombie-movie fan, normally, but I like a well-done action flick, and when David Denby says something is good, I listen.

-- Our new bed arrived, at 7:30 on Saturday morning. (!) I literally had to wake Dave up so the workmen could move the mattress and put the platform together. It looks great, though! Part of my mission in Florida is to buy some new bedsheets, because we can't get sheets for an American king-sized mattress here in England. (We could mail-order them, I suppose, but I'd rather see them before I buy. Besides, who wants to pay for shipping?)

-- I took the painting I found the other day to a charity shop. Let them decide whether it's worth trying to save. Dave is happy to have it out of the house.

-- I've been meaning to link to the second half of the London Portraits post on Little London Observationist, featuring a few more of my photos. Enjoy!

(Photo: A mysterious giraffe has moved into our neighborhood.)
Posted by Steve Reed at 6:45 AM

I love those London portraits, and loved seeing yours, which I recognized instantly, among them! Safe travels tomorrow and I hope Olga feels better soon.

Oh no! I hope Olga checks out okay at the vet. Fingers crossed.

Congrats on getting more pics out there. I enjoyed the link!

Safe travels to the US!

I love your life.

It was me that said that Olga might eventually swallow something she couldn't easily get rid of. I feel as if I've cursed her. I'm sorry! I hope she's okay.
I love those pictures. Yours make me smile. The "character" especially.

I hope Olga will be okay. Safe travels! From the night of the 9th through the 13th, I will be in a hotel and won't have my computer, which is a desktop. Will email you contact info.

I went to see WWZ with the grandboy and his friend and I liked it very much. It's a great zombie movie and action flick. as for Olga, I hope it doesn't require surgery either but I'm not optimistic. I think I've mentioned my friend with the dog that eats towels and paper and has had to be surgically cleaned out more than once.

have a safe trip. hope Olga feels better soon. wish i lived there so i could watch her while you are away!

That's funny about the early morning delivery - ouch! I slept until 11:30 on Saturday (something I used to do regularly but haven't done in YEARS -I felt terribly decadent.

Hope Olga is doing ok - I'll be watching for updates!

Ooooo, hope the pup is OK!!! Absolutely loved the link and your photos...well done!