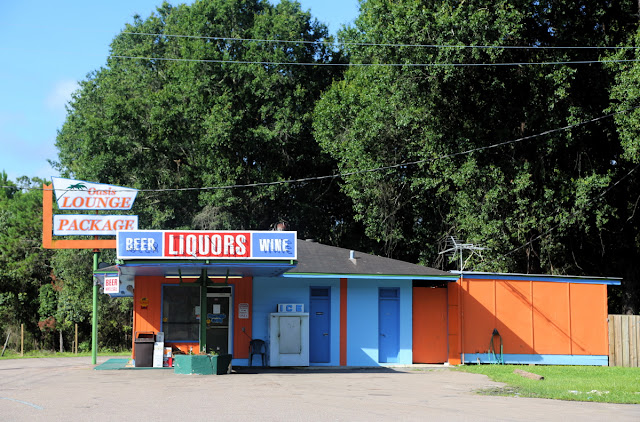 A good road trip, in my book, involves lots of dillydallying. When you see something interesting, you stop the car and check it out.

When I was growing up, my parents both drove with a sense of purpose. They were big on getting miles under their belts. My brother and I would plead with them to stop at some cheesy roadside attraction -- "Please, can we go to South of the Border?" -- but our pleas fell on deaf ears. My father might stop at a national park, if we happened to pass one, but even then the visit usually lasted an hour or two at most.

I didn't go to South of the Border until I was 33, and by then it wasn't worth it. 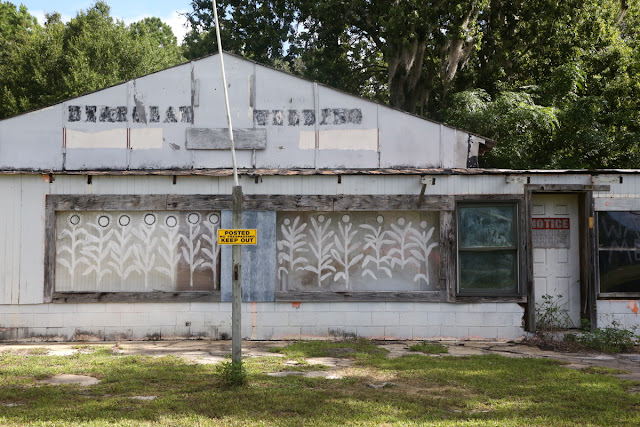 So when I drove back to Tampa from Jacksonville yesterday, I took the scenic route. I drove all the way south on U.S. 301, rather than hopping on I-75 north of Ocala, which is what I usually do. And I stopped whenever I had the urge.

I stopped at a fruit stand south of Baldwin and bought a dozen peaches. They were $8, which I didn't think was much of a bargain, and they had stickers on them, so they were commercially picked. They weren't from someone's backyard orchard, as I'd hoped. But man, they're good. They are not supermarket peaches.

I also poked a finger in the eye of the gods by taking a detour through Lawtey, one of the notorious "speed trap" towns along U.S. 301. Here and in Waldo, to the south, the police have long been known to be aggressive and even sneaky about enforcing speeding laws. But I'd never actually seen the town of Lawtey, just the stretch along the highway. So I drove some of the side streets -- very slowly -- and found some nice old Florida houses and wide lawns. 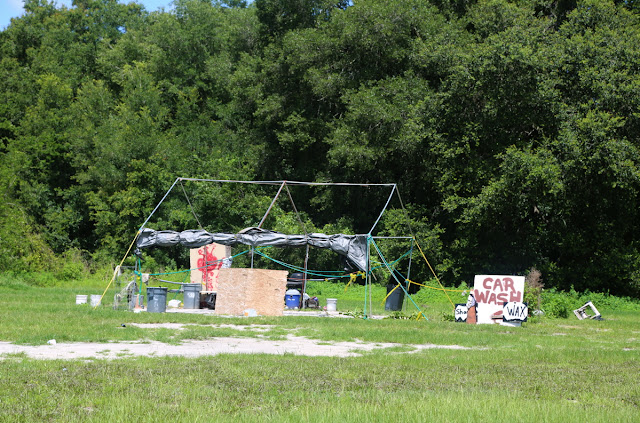 Then I stuck a finger in the eye of the gods again by stopping to take photos in Waldo. I'm telling you, I was risking it.

Once I made it through comparatively congested Ocala and Belleview, I got to enjoy the shade-dappled road through the forests and pastures of Sumter and Hernando counties, and through communities with perplexing Florida names like Croom-a-coochee and Trilacoochee. (They're near the spot where I sank my car in sand years ago.) 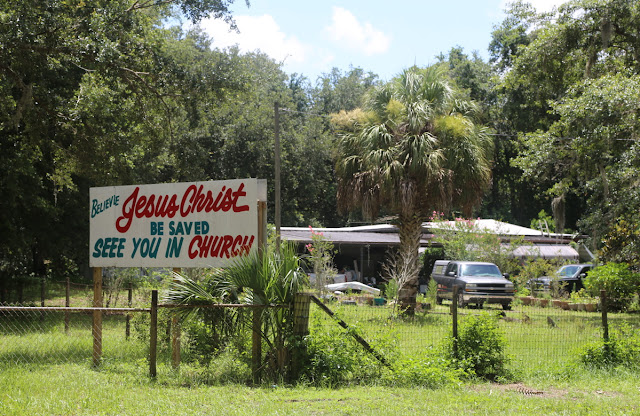 When I got to Dade City I made a right turn and headed toward my mom's house. As it turned out, I didn't dillydally all that much. I still made it home in about four hours, which isn't too far off the mark.

(Photos: Top, somewhere near Starke. Second, welding in Waldo. Third, a minimalist car wash in Trilacoochee. Fourth, getting saved in Land O' Lakes.)
Posted by Steve Reed at 11:37 AM

Lawtey drums up images of the belt-bustin, cigar-chewin Boss Hog. And my best friend is from Lacoochee, FL, which is just outside of Zephyr Hills. I'll have to ask her about the other -coochee cities. I like the contrast of your London photos to your Florida photos; their opposing vibes seem to eminate from the photos themselves.

Seeee you in church!

I love the back roads and prefer them to highways. unless I'm driving to the city and back.

love the pictures...i too love to stop along the way, road side stands, antique malls, garage sales...i am a sucker for them all!

Mike & I are total back roads people. It's the best way to see the world :)

Seeee you in church!

Love the carwash and as for dilly dallying - that's my lifestyle and should not be confined to road trips! Seriously.

I absolutely love rides like that but haven't done that in ages. And it's so much better when you're a passenger...you get to see a lot more. My dad was a 'Let's go for a Sunday drive' guy and I recall many sites we got to see as children throughout Pennsylvania and New Jersey. Thanks for reminding me of these great memories!