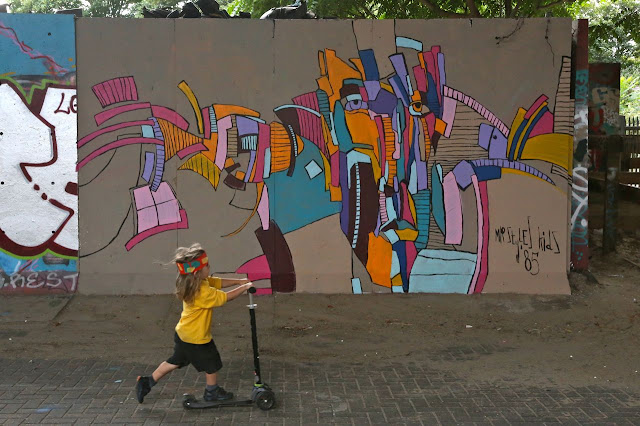 Remember Mr. Styles, whose graffiti I've encountered several times at Latimer Road? He has another piece up now, which Olga and I found on our walk the other day. It's always nice when I'm out with the dog and we see something fun and interesting.

This morning, on the other hand, we had a very upsetting experience. We came across not one but two dead foxes in the street a few blocks from our flat, apparently killed by cars. They looked relatively young. My guess is they were going through bags of garbage awaiting collection on the sidewalk when something surprised them and they ran into the road. I've seen foxes in that area in the mornings, and I assume these two were some of the same animals I'd seen. Someone had spread flowers over the bodies, including some artificial blooms that appear to have been taken from the Karma Kab.

I took pictures but they're depressing, so I'll spare you.

Yesterday Olga and I took a long walk through Maida Vale, all the way over to Edgware Road, which is farther than we've ever gone in that direction. It was a beautiful day, sunny and cool. Oddly, the more I walk this dog, the more energized she gets. I thought she'd be exhausted last night but she was bouncier than ever. She likes rolling around on the bed in the guest room, which I'm trying to avoid so I don't have to repeatedly wash the duvet cover.

Last night Dave and I watched "Kiss of the Spider Woman," which I hadn't seen in, oh, probably 25 years. It's a good movie. I have a dim memory of struggling to stay awake while watching it with friends in college!
Posted by Steve Reed at 7:06 AM

It's an incredible movie. I haven't seen it in a long time but I remember its impact. It did not put me to sleep.

Poor foxes! I'll admit to being curious about the pictures, however I'll take your word for it that it's depressing.

Olga is adorable. And ... I remember that boundless energy of the young Jake. It can be overwhelming.

Ah, Raul Julia...haven't thought about him in years...
Does Olga have a bouncey dog bed to hang out on?

I got one for another friend's dog before they left here and the dog likes it so well she sleeps in it all the time.

Ah, how sad. How sweet of someone to lay flowers over them.

I don't think I've ever seen "Kiss of the Spider Woman."

Love the child on the scooter. How opportune!

sad about the foxes. it saddens me when I see dead squirrels in the road too. why don't you just put an old sheet over the duvet on the bed in the spare room and Olga can roll to her heart's content.