At the Grave of Karl Marx 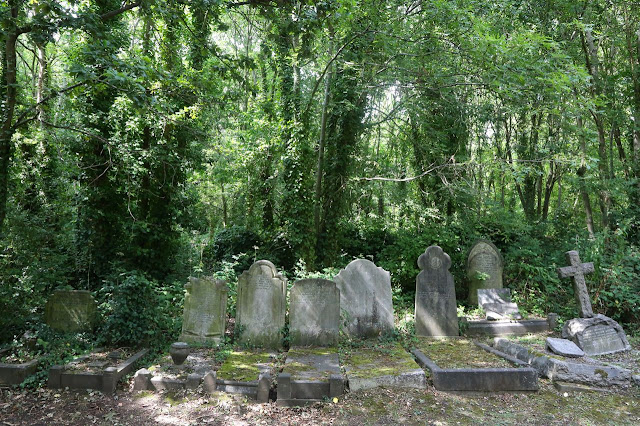 I went walking yesterday in Camden and Islington, in North London, and found myself quite by accident in the neighborhood of Highgate Cemetery. You know I'm into old cemeteries (remember Brompton and Kensal Green?) and I've always meant to visit Highgate. So I took a quick self-guided tour. 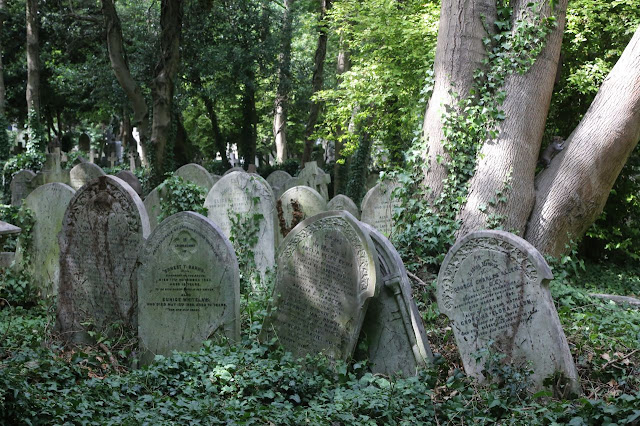 The cemetery has plenty of graves from the Victorian era and earlier, including many headstones that are pretty much overrun with ivy or otherwise illegible. Some of the more peculiar or noteworthy ones are highlighted for visitors on a map handed out at the gate. 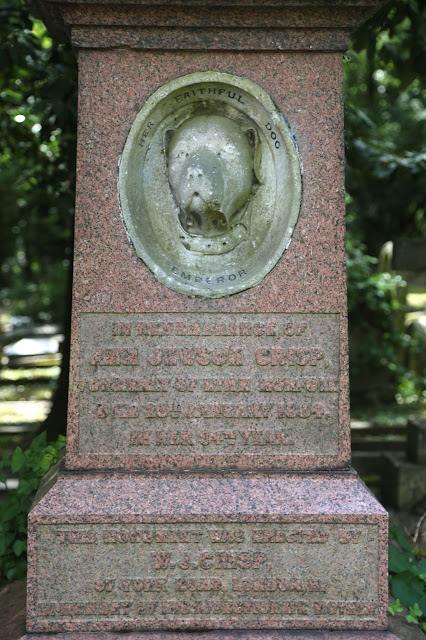 There's the grave of Ann Jewson Crisp, which bears a portrait of her faithful dog, Emperor. The stone doesn't make clear whether Emperor is buried alongside her, but there's a note on the side -- almost as an afterthought -- that says, oh yeah, her husband is there, too! 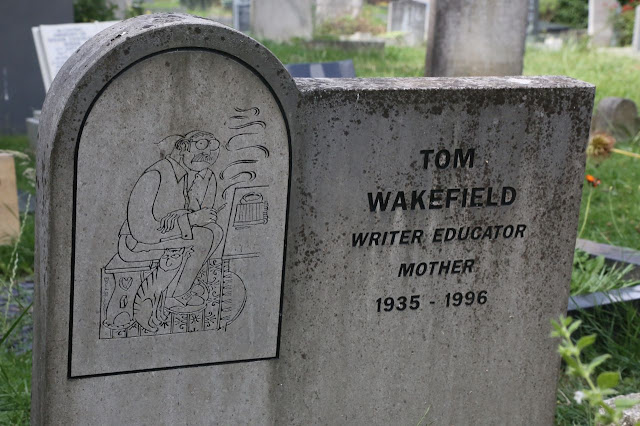 Tom Wakefield was a school headmaster -- which is probably why he considered himself a mother. 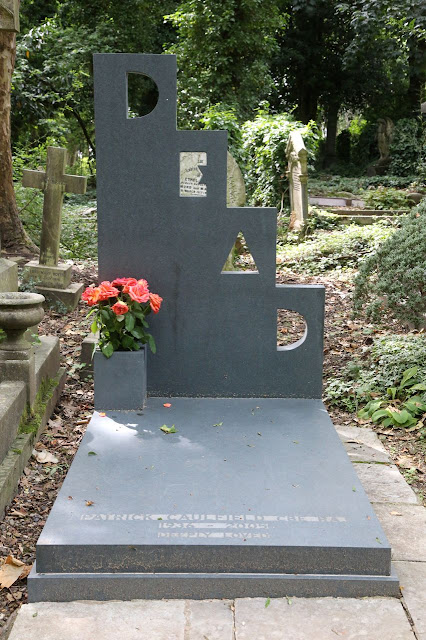 Patrick Caulfield, a pop artist, exhibits a sense of humor with his gravestone. (Coincidentally, there's a show of his work at the Tate at the moment.) 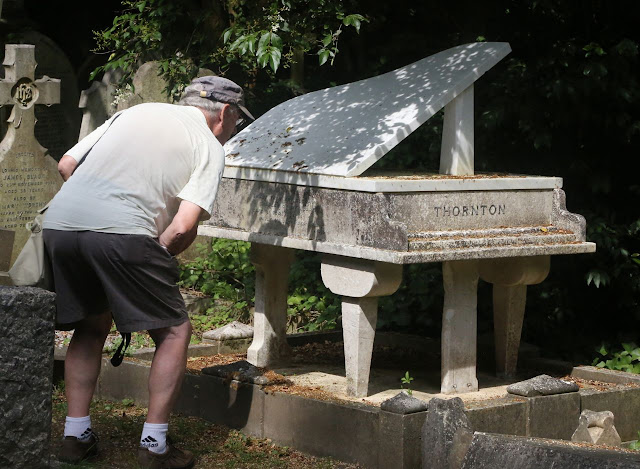 Pianist Harry Thornton died in the 1918 Spanish flu epidemic at the age of 35. 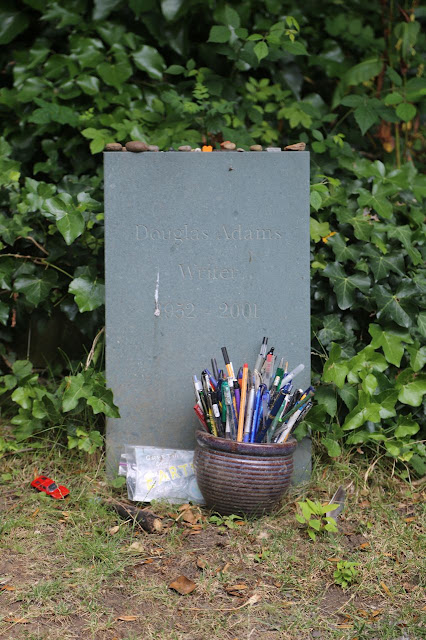 Douglas Adams wrote "The Hitchhiker's Guide to the Galaxy" and other books. Apparently bringing him a pen or pencil is the thing to do. Someone also brought a possibly handmade postcard saying "Greetings from Earth." 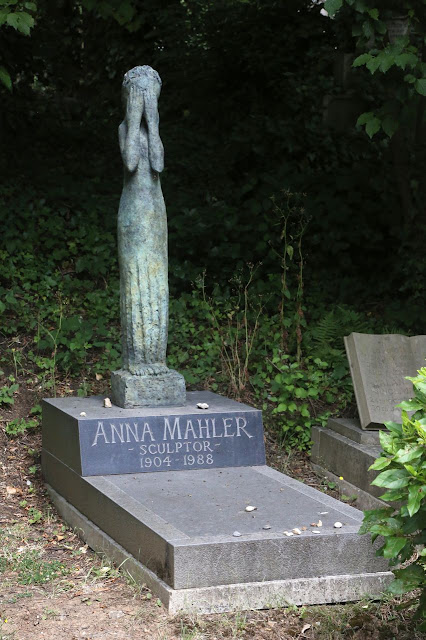 Anna Mahler was the daughter of composer Gustav. 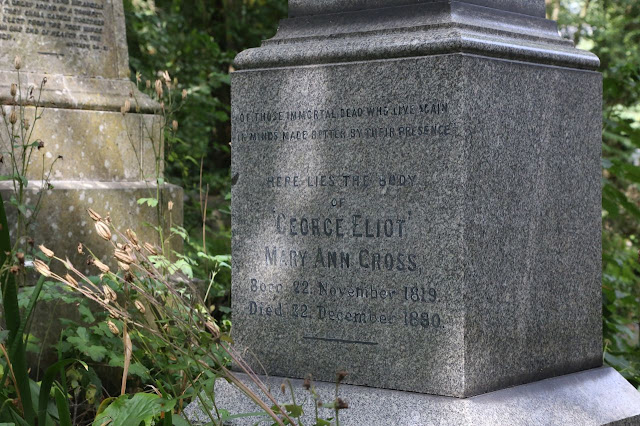 George Eliot, who famously transgendered herself when she came up with her nom de plume, wrote "Middlemarch," which I read several years ago, as well as "Adam Bede" and other books. 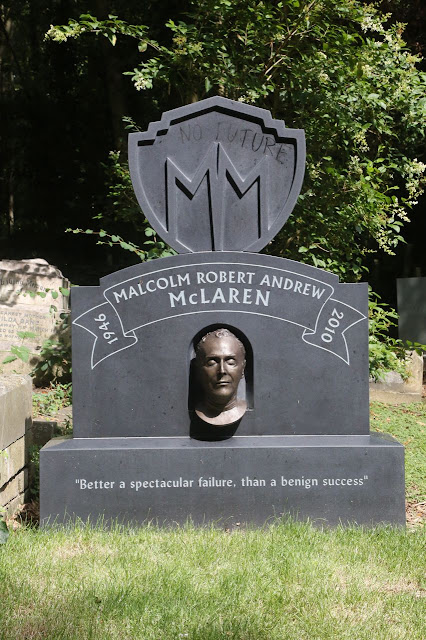 Malcolm McLaren was a famous punk music impresario and manager of the Sex Pistols. He teamed up with Vivienne Westwood to nurture punk fashion in London in the 1980s. It seems fitting that some anarchical fan has scrawled graffiti on his grave. 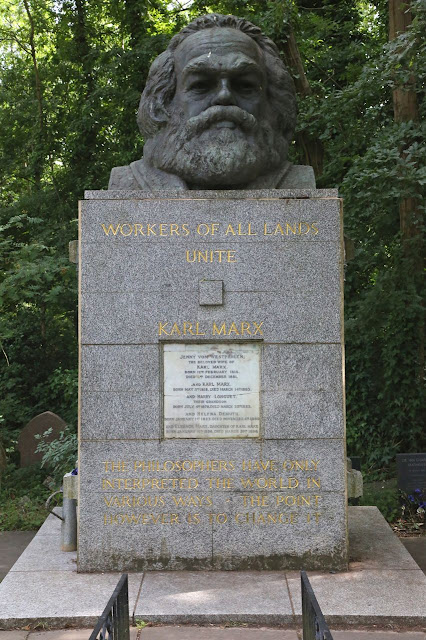 And finally, "Workers of All Lands Unite," it's Karl Marx himself. Probably the most famous headstone at Highgate, it comes with a huge sort of Communistic bust. Far better to be here than embalmed and displayed for decades like Lenin.

Though there are many other interesting headstones, and many more people of note in British culture and history, these were the only ones I readily knew.
Posted by Steve Reed at 7:07 AM

Karl Marx was buried in England? did not know that. those, victorians though, they buried their dead packed like sardines.

Grave yards are favorites- I could wander for days in them- this one is the BEST! WOW! Love the "DEAD" one. Headstones here tend to be all cherub, lamb and angel stuff, which I suppose is comforting to some. Thank you so much for taking us with you, death can be fun!

I love cemeteries! I keep vowing to go over to the one in Sleepy Hollow.

Like Linda Sue, I think the DEAD one is pretty humorous. Love the piano! Also the thought of leaving pens and pencils for Douglas Adams--how sweet.

This reminds me so much of a Neil Gaiman book. It's called, appropriately, "The Graveyard Book."
I loved it. You might too.

Many years ago, I visited this cemetery and took the tour of the other side. I highly recommend that tour. On the other side, the graves tend to be much older and the atmosphere is somewhat eerie to say the least.

I didn't know that Douglas Adams was Jewish (or am I wrong about leaving stones on the headstones of Jewish graves?).

Years ago I was impressed with all the cats in Highgate. Can't believe I lived in London 3 years and didn't make it back there! What a wonderful place! Great photos.

That 'Greetings from Earth' postcard is definitely handmade. :) I should know, because I made it.

The Bug: I noticed the stones, too. I don't believe Adams was Jewish (despite his nose...) but he *does* have Jewish fans, which I suppose could explain the stones.