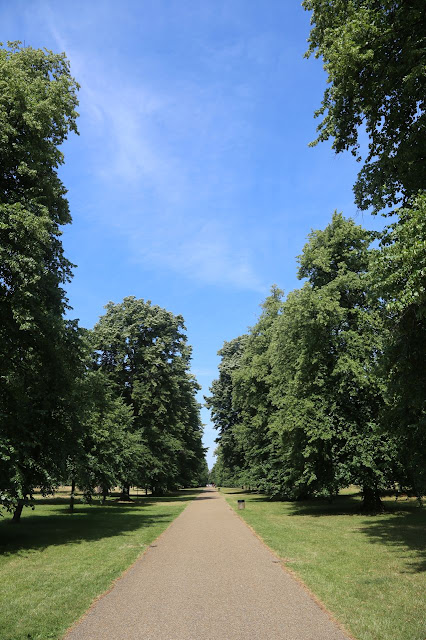 Olga and I went for a walk in Kensington Gardens yesterday, where the trees are still green and verdant. But there are definitely signs that we are already slipping into late summer, and will soon be standing on the doorstep of autumn. 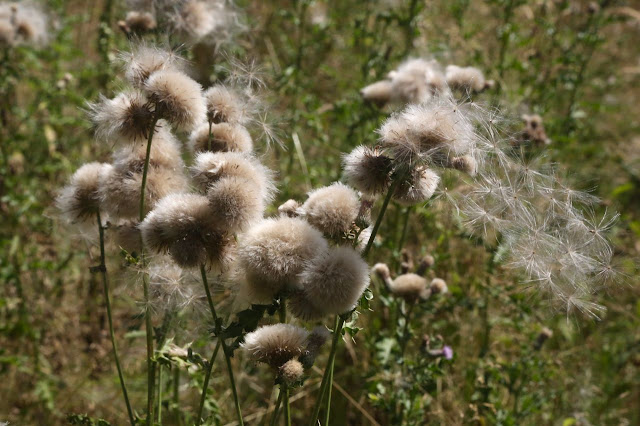 The thistles have gone all fluffy, with big clumps of airy seeds drifting in the wind. I saw one drifting in the Notting Hill Gate tube station last night -- probably not a great place to settle down and try to grow, but I was impressed by its ability to travel so far. Dave said his mom used to call such airborne seeds "back-to-school snowflakes." 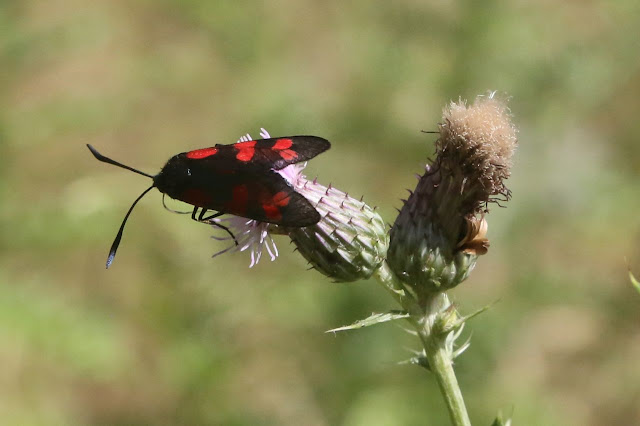 Here's an interesting critter I found on the thistles -- a type of moth known as a six-spot burnet. (At least, I think it's a six-spot. There's also a five-spot burnet, the difference between them seeming pretty subtle -- just one spot! -- to a non-entomologist like me.)

The caterpillars that were feasting on our horseradish seem to have either slowed down or died. The plant is holding its own. Also, one of my readers asked whether any of Pat's children survived, and the answer, as far as I can tell, is no -- at least not on our balcony. We are Pat-less this year.

Dave and I went out last night to Pierre Koffmann's eponymous restaurant in Knightsbridge for an anniversary dinner. It's been three years since we had our civil union back in New Jersey, in what already seems like another lifetime! Our actual anniversary date was the 21st, but we've been dragging out our celebrations, to tell you the truth. Every time we want to do something special we say, "Well, it's for our anniversary!" Last night the restaurant brought us a special plate of petits-fours with "Happy Anniversary" written on the rim in chocolate. I suppose it's time to consider the occasion properly commemorated -- which doesn't mean we can't come up with other reasons to celebrate each and every day.
Posted by Steve Reed at 7:16 AM

Happy Anniversary! May every day be a celebration...

yah, happy anniversary. as for late summer, all I can say is...ha! late summer won't come until the end of august around here.

I wanted to be the first to quip "well spotted". And, of course, congratulations to you both.

Fall is definitely coming - I can tell the days are shorter and though still verdant, the green is starting to fade.

I'm so good with that!

Happy Anniversary to you and Dave! These photos are particularly beautiful -- and when I looked up at the tree in our driveway today, I had the sudden thought that fall was around the corner and that it would lose its leaves!

Congratulations on the anniversary. It's always good to extend the celebrations!

Congrats!
I can feel fall too. August is always the downward spiral of the summer here. The pool temp drops suddenly and the sun making a lower arc in the sky. I'm not quite ready for that just yet. It seems the summer has flown by.

P.S. It was me that asked about Pat's children. Too bad. Nothing from Charlotte either. :(

I just today bought some new summer sandals. I guess I'll wear them for a month & then put them away until next year...