The Moon, The Park and Other Things 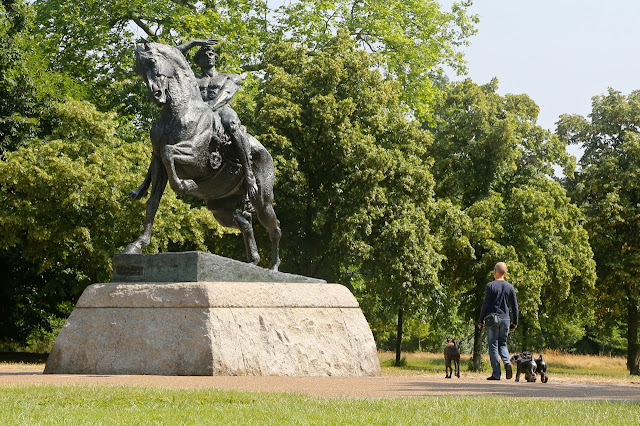 We're going through a fairly hot, dry spell. It's actually pleasant, with temperatures in the high 80s, and a blue dome of sky unbroken by clouds. Olga and I went to Kensington Gardens yesterday -- we sat beneath a tree, where she happily gnawed on her Kong toy as I watched a parade of people pass G.F. Watts's "Physical Energy" statue, dedicated to colonial conqueror Cecil Rhodes. 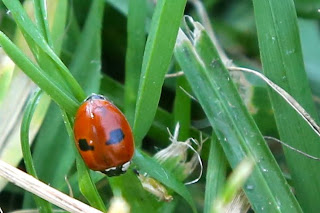 I also watched a ladybug -- or ladybird, as the British would call it -- crawling through the grass. This was a two-spot ladybug, which is very common in Britain and Europe, and not a disruptive interloper like the harlequin ladybug I found in our flat a couple of years ago.

After I brought Olga home and grabbed some lunch, I went to the National Portrait Gallery to the see the exhibit of BP Portrait Award winners. Dave and I went to this annual show a few years ago and we loved it, so I was eager to return, and I wasn't disappointed. The variety of portraits and styles was fascinating.

Then I wandered around Soho for a short time, taking photos and enjoying the afternoon. I grabbed coffee at a cafe where I sat next to two guys who were strenuously discussing a movie project. It seemed like one guy kept trying to convince the other guy to think about filming for television, rather than a cinema release. There was also something about "Nicole" and her schedule. Not that I was eavesdropping or anything. 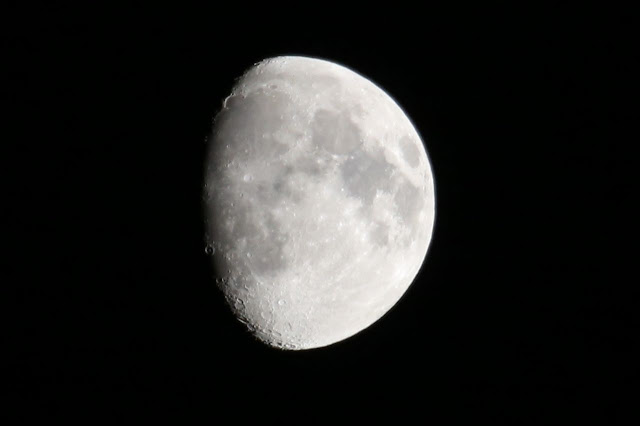 Finally, last night I rented "Wings," a silent movie I have wanted to see for decades. It was the first movie to win an Oscar for Best Picture, in 1929, and for a long time it wasn't available on VHS or DVD. Apparently for some time it was even believed to be lost entirely. Fortunately it was recently remastered and is now available on DVD and through iTunes. I expected it to be dated and stilted, despite the presence of "it girl" Clara Bow, but it's actually exciting and very watchable. It's even got some fleeting nudity, salty language (if you can lip-read) and perhaps the most romantic death scene featuring two men that I have ever seen.

After the movie, just as I was going to bed, I noticed the moon -- one benefit of clear skies!
Posted by Steve Reed at 7:44 AM

I'm always amused at people who talk about how hot it is when the temperatures are only in the high 80s.

Love the overheard conversation - I want to know if they actually DO make a movie with Nicole!

That moon shot is fabulous!

Great shot of the moon! We too are experiencing extremely high temps in the high 90's with "real feels" of 105. Yikes. At least I have air conditioning to hide in!

So glad you're getting nice weather! What a relief.

So many little differences in our two cultures.