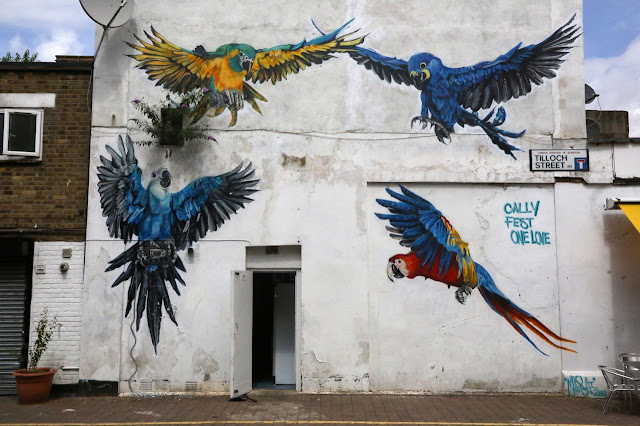 On the day I found myself in Highgate Cemetery, I'd originally set out walking in Islington in order to find this wall. Pretty great, isn't it? You can't quite tell but the two parrots on the left are carrying sound equipment -- a boombox and a microphone. "Cally Fest" is a reference to an annual street party along Caledonian Road, for which the mural, by Masai, was presumably painted. 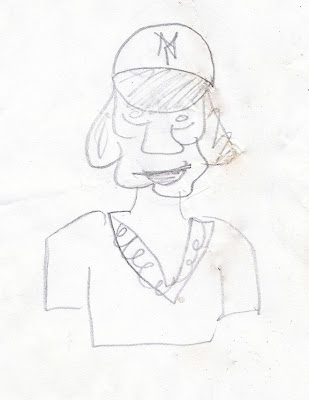 Not a lot has been happening around here. Dave and I went to get massages yesterday, which was the high point of the day. I haven't had a professional massage in about six months, I think, so I was due.

Then Dave made vegetable soup and homemade rye bread for dinner. The bread didn't really turn out as he had hoped -- it was a little too dense -- but it was a valiant first effort and we ate it nonetheless. That's my motto when experimenting with food: Eat your mistakes. 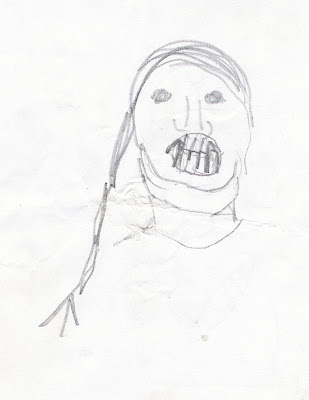 I found these little pencil drawings lying near a sidewalk trash can when I walked Olga yesterday morning. I couldn't resist picking them up and scanning them. Dave says I find the strangest things when I walk. You just have to keep your eyes open, you know? Besides, these weren't as strange as the man I saw the other day at King's Cross, wearing a crown made entirely of pornography. 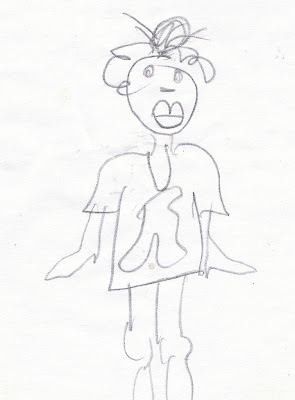 Last night we watched "Clear and Present Danger," with Harrison Ford, as well as "Fast Times at Ridgemont High," which was pretty much the iconic movie for anyone in my age group when we were back in high school. It does capture the early '80s particularly well -- the cars, the malls, the music, the fashion. Sean Penn and "Mr. Hand" make me laugh every time.

We're trying to figure out what we're going to do for the last weekend in August, when the Notting Hill Carnival is in town. We definitely do not want to stay in our apartment. Too much noise! We're thinking about going to the Cotswolds with the dog, but since the Cotswolds is a region of scattered villages, touring there may be a bit dicey without a car. Stay tuned!
Posted by Steve Reed at 7:18 AM

What happened to Barcelona?

Perhaps getting to a specific village by train?

Barcelona is still happening -- that's a separate trip, beginning Thursday. Our Cotswolds trip will be at the end of the month.

And yeah, that's probably what we'll wind up doing -- taking the train to a nearby town or city and heading into the countryside from there, one way or the other.

The mouth on those sketches -- very weird!

I used to refer to my sone, when he was living at home, as a 'finder' because he was always finding things and bringing them home. also, that kid found more money lying on the ground than any person I have ever known. dollar bills mostly but a 20 once.

Beautiful parrots! I love to see a close-up of the artwork.

The Cotswolds sound heavenly. I have these quaint little villages with cottages in my head ... narrow little carriage-ways ...

You can get from Chipping Camden to Stratford on Avon by bus.

I love rye bread - I just finished off a loaf (store-bought of course - ha!).

I love the parrots! And on the subject of eating your mistakes, you should read Michael Pollan's latest book, Cooked. It has a section where he describes teaching himself how to bake bread and the many mistakes he and his family consumed in the process.

THe parrots are tremendous!

Glad you will get away during the festival. You've been there, done that.

The sketches are incredible!

I think you're right. You find the most interesting things because you know what to look for. And aren't we all the happier for it!