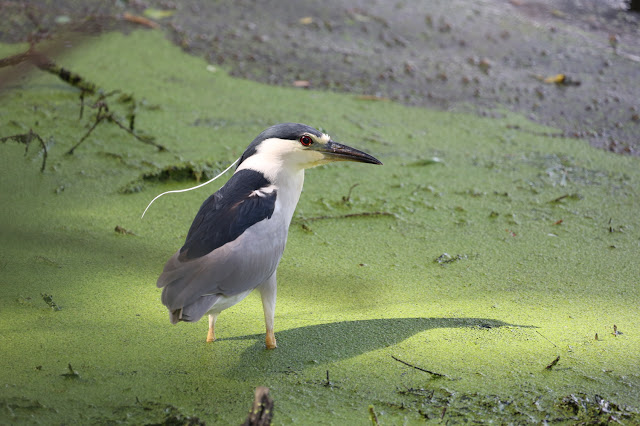 Our Fourth of July was relatively tame. My brother grilled a steak. We ate the required potato salad. We listened to fireworks from the neighborhood exploding all around us, but we couldn't really see any of them above the treeline. We were going to light sparklers but drizzly skies washed those plans away. Even my niece Jane, who is 7, was fine with that. She wanted to watch a movie instead.

The fireworks were enough to unnerve Henry, my brother's dog, who has never been quite right and who reminds me so much of Ed from "The Lion King." Henry spent the evening in his crate and he looked happy to be there.

I've learned more about the Super Mario video game than I ever thought possible. Jane gave me an extensively narrated demonstration. There's something mesmerizing about the goofy music that plays in the background during Mario. Pretty soon you find yourself in a kind of trance. It's like the Weather Channel.

We took a walk through the neighborhood, where I photographed some bird life. There's a pond nearby with lots of activity -- cardinals in the trees, wood ducks and anhingas on the water. My brother also has a feeder in the yard, where there's always something fluttering around. 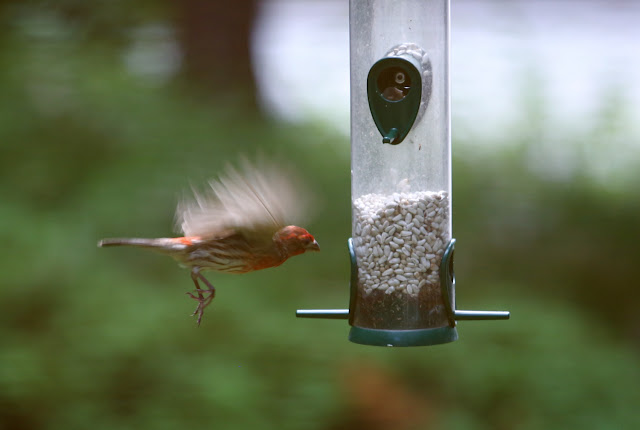 I've held my new niece, Kate, who is so new she doesn't even really open her eyes. She's very cute, with lots of dark hair. I never knew a newborn baby could have so much hair. She reminds me of a Cabbage Patch doll -- or maybe it's the other way around -- except that she's more demanding. I let the parents handle her demands. I'm just a bystander, here!

I'm not online much at the moment but I'm trying to keep up with my blog reading. Because I'm using my old, decrepit Florida computer, I can't seem to leave comments on some blogs. So, fellow bloggers, if you don't see me on your blog, I haven't shunned you -- I probably really AM there, and just muzzled by ancient technology.

Dave tells me that Olga pooped normally this morning! Yay!

(Photos: A black-crowned night heron (top) and a house finch at the feeder.)
Posted by Steve Reed at 11:27 AM

What a beautiful bird and a great capture!

Sorry to hear about you drizzly weather. I'm sure you were hoping for some sunshine in the Sunshine State!

I used to be a Mario junky--love those games! And you're right about the music.

thanks for updating us about Olga...she isn't even my dog but i am drawn to her life...way to to Olga...love you sweetie!!
happy to hear you are enjoying the visit with your family.

Sometimes pooping normally is just the very best thing ever, isn't it? For man or beast.
Your birds are stunning.
I'd love to see a picture of that Cabbage Patch baby. I do love a baby with lots of hair.

I know nothing about Super Mario brothers - and I'm ok with that!

Your bird pics are spectacular. Wow.

well, the poop news made my day. Your birds are gorgeous, really, the one in the green growing water! wow! Missed your blogs, am now caught up- while the boys were here I pretty much did not engage in computer life. So glad I plugged back in, Your blog is like lemonade on a hot day.

I'm glad you had a good (if somewhat washed out) 4th!

Two of our neighborhood neighbors were shooting of their aerial fireworks, ban or no ban, so we were bad and joined right in with ours. For a while, three of us were lighting up the night sky with beautiful explosions of light.

Glad to hear Olga is recovering without surgery.

That hummingbird photo is incredible! I'm glad that you're having a good time -- holding babies is nothing but good for the soul.

Great timing on that bird short! I don't recall the Mario music but will be sure to pay more attention when I see my grandsons next.