Settling In, With Flames 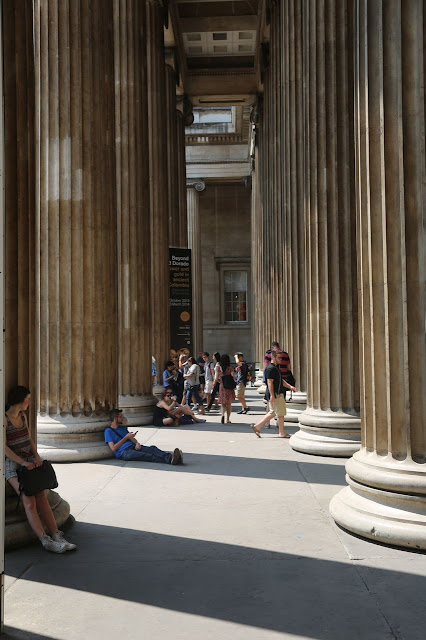 My internal clock is slowly getting back to normal after a couple of days of jet-lag. I tried very hard not to go to sleep early on Tuesday, and managed to stay up until my normal bedtime even though I got no sleep on the plane. Yesterday I kept my usual schedule too, avoiding naps and off-hours sleeping. I had trouble falling asleep last night, but I'm getting there.

My flight back to London was uneventful, except that I was on a plane with a bunch of nervous fliers. As we were lined up on the jetway waiting to board the plane in Tampa, a man walking in front of me seemed strangely slumped. He kept shooting sidelong glances at his female traveling partner. When we got to the door of the plane, the woman confessed to the flight attendants that her friend was nervous. The attendants smilingly whisked him away, perhaps so that if he started screaming he wouldn't freak out the rest of us. Then, sitting in my seat, I overheard a middle-aged woman tell another passenger that the small dog in her lap -- a little white mop-head of a thing -- was meant to calm her fear of flying. The other passenger asked how that worked, and I didn't hear the answer, but apparently the woman was taking no chances because she also admitted she was medicated.

For the record, I don't think anyone loves flying. Most of us are a little unnerved. But I have not yet had to resort to medication. (Well, except a gin & tonic, which I did order from the beverage cart -- and it was a darn good one too. I noticed everyone around me ordered juice. I attributed that to a fear that alcohol would conflict with their anti-anxiety drugs.)

I was home just long enough to see Dave for about four hours, and to go to lunch with him at a local restaurant. Then he was off on a plane to Las Vegas for a convention, handing off Olga care to me. Fortunately she is finished with all but one of her medications, so my Olga-related duties will be much less intense than his were during my absence.

We had a bit of excitement in the apartment complex on Tuesday night. While walking Olga I noticed a relatively large fire on a neighbor's balcony. I ran over and tried to figure out what was burning, but I couldn't really see past a sort of privacy barrier that blocked visibility through the railing. Other neighbors began to appear on their balconies, all curious and probably alarmed. Eventually I and three other people gained access to the neighbor's stairwell and knocked on the apartment door. It was answered by a rather blasé guy who informed us that the fire was just his barbecue grill. 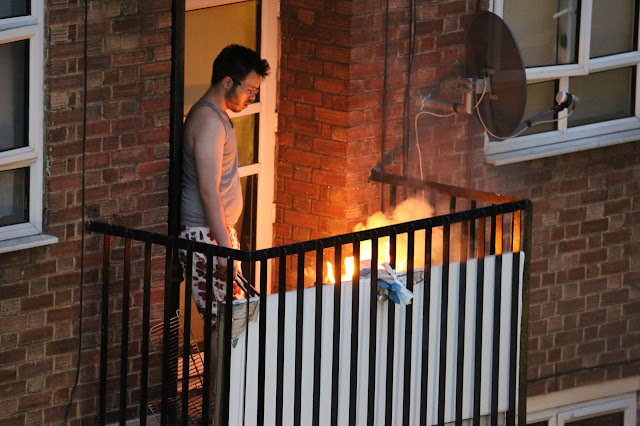 "Well, the fire is too big," I told him. "It's dangerous." The others all nodded their assent. The neighbor then stood on his balcony next to the blazing grill, perhaps to show that someone was tending it, but when we heard sirens -- yes, someone called the fire department, and I swear it wasn't me -- he put it out and disappeared inside. I guess he broiled his steak in the oven.

Call me paranoid, but I didn't want us to be the next Lakanal House.

Yesterday, despite my jet-lag, I was able to meet with several friends from the U.S. who are passing through London. My friend Arne from D.C. is here with his sister and partner; we met at the British Museum and had lunch together. My friend Jennifer from New York is also here, on business, and we grabbed some beers in the evening. It was great to catch up with them. I can see this will be a pattern during my life with Dave in London -- catching up with friends during the summer travel season! Bring it on!

(Top photo: Shade-seekers on the portico of the British Museum, yesterday.)
Posted by Steve Reed at 6:10 AM

Yikes on the fire! I always wonder about those warnings on grills -- that they're not for inside use -- who uses grills like that?

I wish I was going to meet you for beers. Damn.

Two glasses of wine before a flight and I'm good to go! ;) Rescue Remedy also helps calm my flying jitters when I get them. (No wine for a.m. flights though.)

That's quite the blaze that guy had going. I wonder who would want to eat whatever it was that he was "grilling"?Scary.

Our apartment complex forbad grills like that on our balcony - we just used our Foreman propane grill when we lived there.

I am NOT a nervous flyer. To me the most interesting parts are takeoff & landing & the rest is more boring than riding a bus :)

I wonder what 'evidence' he was getting rid of cause I don't think anyone cooks anything on a grill with a fire like that.

Neighbours: like family, we can't choose them. We put up with "Yappy Dog". Can't blame the mutt if its owners have shit for brains.
I'm not afraid of flying, I'm merely afraid of falling to earth.

Neighbours: like family, we can't choose them. We put up with "Yappy Dog". Can't blame the mutt if its owners have shit for brains.
I'm not afraid of flying, I'm merely afraid of falling to earth.

That privacy screen looks as if it's made of wood. Guess he likes to live dangerously...at the expense of others. There are some crazy people out there...some of them were on your flight...LOL

Dude is roasting marshmallows, either that or he's the devil, and his balcony is hell. Welcome home!