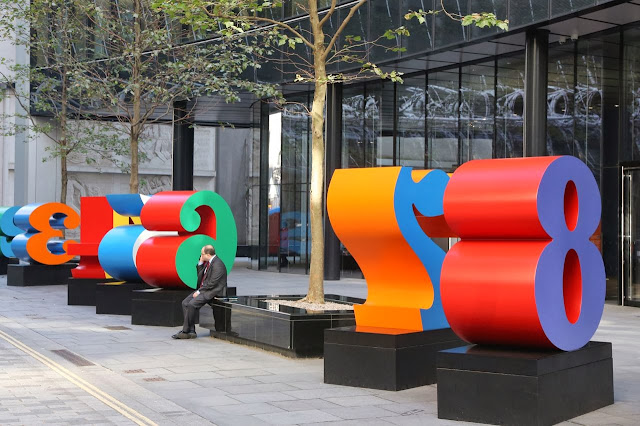 Yesterday morning I took the tube east into the City of London, the land of the three-piece suit. I seldom walk around in the central city, where everything is glassy and banks and insurance predominate. I thought I'd see what photos I could find in that environment, and of course there were many to be had -- like this shot of Robert Indiana's sculpture "One Through Zero." (Well, part of it, anyway.)

Then I came back to Notting Hill and Dave and I went out for lunch. I wanted to find an outdoor cafe and take Olga, but he argued against it. I always feel guilty leaving her at home. But he wants to be able to go to lunch unburdened by the dog, which I can also understand, because she is kind of a pain in the neck at restaurants. So, ultimately, we left her here and I took her for a long walk later in the afternoon, which made up for it in my mind.

Now our two-day October break is over -- we're both back to work today.

Oh, and we bought our tickets for Istanbul over Thanksgiving. I'll be so excited to be in Turkey rather than eating turkey!
Posted by Steve Reed at 7:09 AM