Pre-Birthday with a Potent Martini 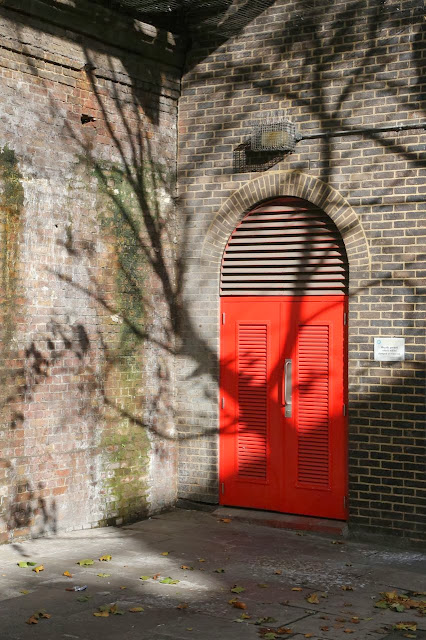 You might call yesterday my "pre-birthday." Dave is going to be away this coming weekend, so he won't be able to celebrate my actual birthday on Saturday. Yesterday became the appointed day.

First we both took Olga for a morning walk, which was a refreshing change, because I could bring the camera and look for photos while he held the dog. (It's always hard to manage the camera and the dog.)  We walked over to Latimer Road to check out the new graffiti, and Olga even managed to find a few squirrels to charge -- or attempt to charge, since she was on her leash. Then I stopped at a cafe on Portobello Road for a coffee while Dave went to Tesco for groceries. 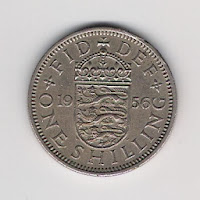 Strangely, I found a 1956 shilling lying on the sidewalk. Britain hasn't used shillings since the early 1970s, when the currency was "decimalised," or simplified from an old system in which apparently arbitrary numbers of many different coins made up larger units. (For example, back then there were 240 pence in a pound. Now there are 100, as you might expect.) So who knows why this coin was lying around. My guess is it was dropped by one of the antique vendors at the Portobello Road market.

Anyway, when we came home, Dave gave me my present, a Hornsea coffee service I'd admired in the window of a charity shop around the corner. I haven't photographed it yet, but it looks like this.

And finally, we went to dinner last night at Apsleys, a beautiful Italian restaurant in the Lanesborough Hotel in Mayfair. Unfortunately I made the unwise decision to have a single pre-dinner martini in the Library Bar, and for some reason that thing hammered me. We then had the seven-course tasting menu with wine pairings, and overall I felt too impaired to really enjoy the food. Which was my own stupid fault. Oh well, live and learn, even at (almost) 47 -- though admittedly this is not a new lesson.

(Photo: A red door near the Latimer Road tube stop, taken yesterday on our walk.)
Posted by Steve Reed at 7:03 AM