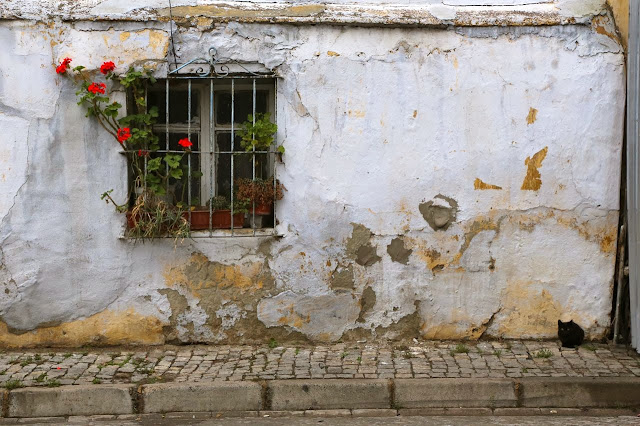 There are cats everywhere in Istanbul. They're often underfoot in cafes, looking disinterested but actually waiting quite avidly for a handout. Last night when Dave and I went to dinner, we saw no fewer than six lurking outside the door of the restaurant. We even saw several in Hagia Sophia, where we went yesterday morning. 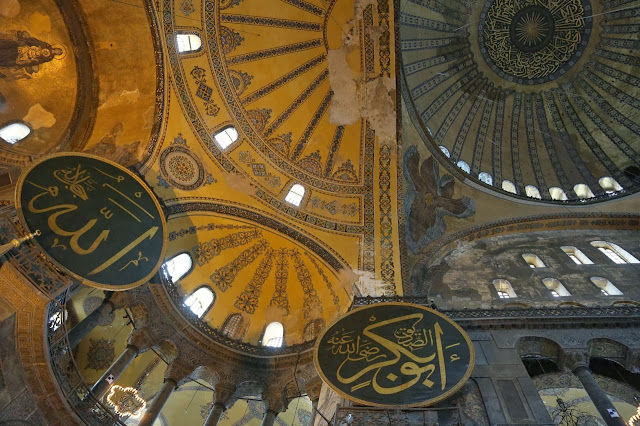 Hagia Sophia (I'm using the Greek-derived name; it's Ayasofya in Turkish) was once the largest church in Christendom, constructed hundreds of years before the huge European cathedrals we all know so well. Construction began in 537 A.D.; it was turned into a mosque in 1453 when the Byzantine empire fell to the Ottomans. Now it's a museum, with an interesting mix of Christian mosaics and immense Islamic medallions.

The marble floors in Hagia Sophia are amazing, worn smooth and sloped by the footsteps of nearly 1,500 years. 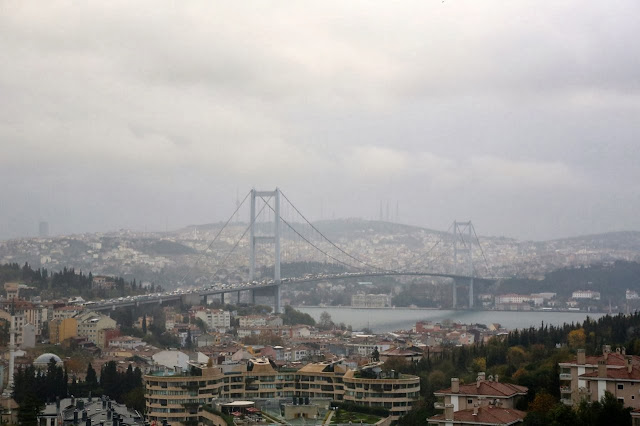 Then we got on one of those hop-on, hop-off tourist buses for a drive around the city. We took the huge suspension bridge over the Bosphorus to the Asian side, came back and got off at Taksim Square, the site of violent demonstrations earlier this year. It's a big, windswept concrete space and not all that scenic.

To escape the cold, we ducked into a welcoming-looking but overpriced restaurant called Kitchenette. (I am convinced they scammed us on the lunch check, but that's a long story.) I was amused to see that the plastic mats at the bottom of the men's room urinals all said proudly, "Made in the USA." Who says America doesn't manufacture anything anymore?

By this time it was starting to rain, so we grabbed some Turkish coffees at a nearby cafe -- I drank mine and Dave's, because he didn't love it -- and got back on the tourist bus. It was headed for Asia again, so we went back again. Asia, twice in one day, and the second time at rush hour! 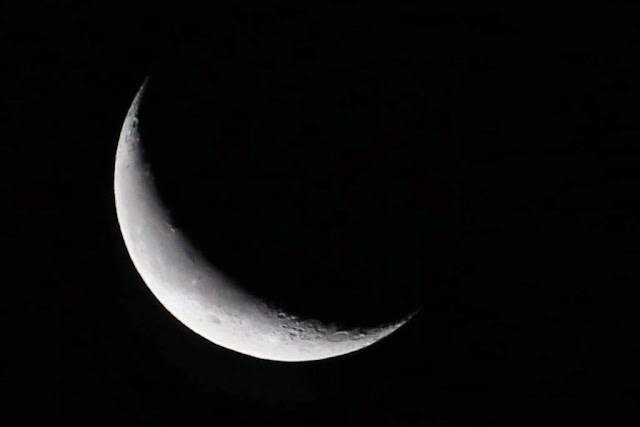 Finally, last night we had a terrific dinner at a restaurant called Giritli, the haunt of the aforementioned cats. It began with an array of 21 different appetizer plates, called mezze, featuring various spiced and herbed green vegetables, fish, beans, eggplant and other starters, followed by a fish course and a dessert. We loved it -- an excellent Thanksgiving dinner!

Early this morning, the moon rose outside our window -- a perfect Turkish crescent. I watched it while hearing the dawn call to prayer from the nearby mosques.
Posted by Steve Reed at 5:24 AM

That moon photo is unbelievable! I went to Istanbul and Ephesus on my honeymoon nearly twenty years ago. Fascinating and beautiful place --

What a marvellous moon photo! I loved Turkey and found the ancient history there so interesting, both to learn about and photograph. The cistern is an interesting site to visit if you are in that area.

Incredible moon shot.
A friend of mine spent quite some time in Turkey and I was amazed as he reported about the history and architecture. It is truly the birthplace of so much.
Enjoy, enjoy!

Sounds like a great time! I love it when you take us traveling with you :)