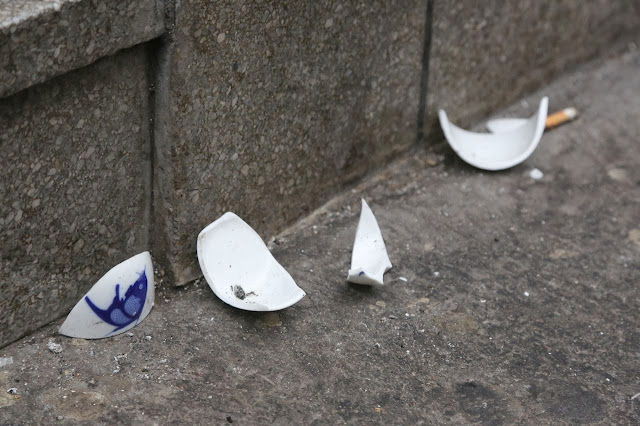 I am moving slow this morning! I didn't get to bed until midnight, and though I managed to stay in bed until about 6 a.m. before having to walk the dog -- in other words, I did get some sleep -- I'm still lagging. Plus it's 40º F outside. My hibernating instincts are kicking in.

Sigur Rós was interesting last night -- definitely different from any concert I've ever seen before. My overall impression was that they're like a heavier version of the Cocteau Twins, with their ethereal sound and incomprehensible (to me) lyrics. (They sing in Icelandic.) The lead vocalist plays his guitar with a bow, which I don't think I've ever seen before, and at one point sang into the body of the guitar to produce a distant, echoey effect, which was amazing. They were accompanied by outstanding video and lighting effects that created a dreamy trance-like atmosphere.

This will give you some idea what they sound like.

Sally, her brother-in-law and I met before the show for some dinner at a "New York Italian" restaurant -- and then I drank Stella Artois, from Belgium -- so overall we had quite a multicultural evening!

Unfortunately, at school yesterday I had a run-in with a loud group of kids in the library, so at times during the concert I found myself a bit preoccupied with thoughts about that -- how I might have handled it differently, what I could have said better. I suppose I need to learn to let these things go.

glad you had a good time, but yes, let the incident with the kids go. they've already forgotten all about it.

I do the same thing - replay incidents in my head over & over. Makes me crazy! Especially because Ellen is probably right :)

Glad you had a good time - I'll check out the video when I get home this evening.

Wow, sounds like you had a great time. They look amazing!

Wow, sounds like you had a great time. They look amazing!