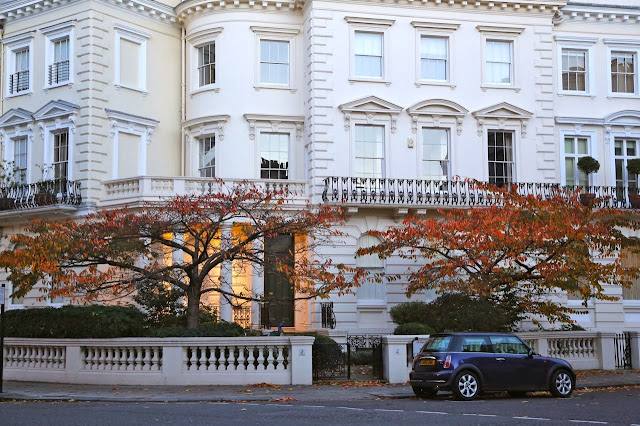 These trees are on Stanley Crescent, a few streets away from our house. I wanted to show you what they look like in the fall, in contrast to their appearance in the spring. They're two of my favorite neighborhood trees.

I read an interesting little tidbit in Eric Schlosser's book "Command and Control," which I am still wading through. (It's quite a tome.) In 1958, an organization called the Campaign for Nuclear Disarmament led a protest march through London:


The CND rejected the whole concept of nuclear deterrence and argued that nuclear weapons were "morally wrong." In preparation for the four-day march, the artist Gerald Holtom designed a symbol for the antinuclear movement. "I drew myself," Holtom recalled, "the representative of an individual in despair, with palms outstretched outwards and downwards in the manner of Goya's peasant before a firing squad." He placed a circle around the self-portrait, an elongated stick figure, and created an image later known as the peace sign.

How about that?! I'm not sure I ever knew the origin of the peace sign. From the Wikipedia page it seems the story may not be quite that simple, with others weighing in on the symbolism and its evolution, but it's still a nice little nugget of information.

Have a peaceful day!
Posted by Steve Reed at 6:53 AM

That is a great little nugget of information -- thanks!

Not only are the trees beautiful in any season, but the building is too.

I had no idea about the Peace Sign. How interesting! Thanks for sharing.

Those trees are a joy to behold.
Remember when the anti-hippies were calling the peace sign the footprint of the American chicken?

there's a golden rain tree not far from me that I finally got a picture of in all it's pink seed pod glory.

The trees, the house, the street- pretty darned nice!Also loving the decapitated doll head thing in the trash- Some little girl must have revolted at her career choice as a hair dresser- or executioner...anyway, that is quite a great find!

Lovely trees! I'm glad you wade through tomes - I don't have the patience for it :)

Wow - every day's a school day. Thanks for enlightening me!

The trees look so beautiful against the white facade. Hard to believe they're the same snowball trees from the spring photo.