No Prostitutes at This Address 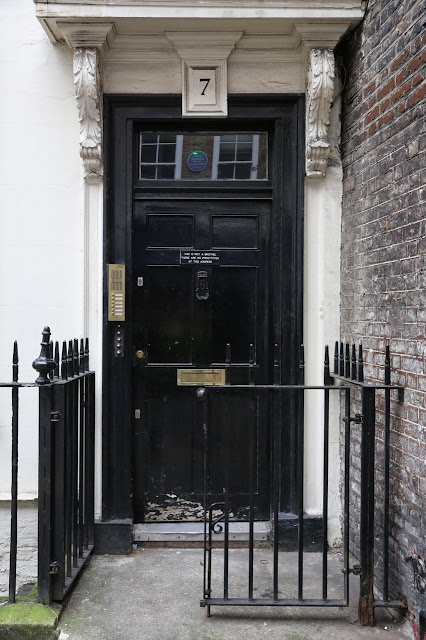 On a narrow side street in Soho stands one of the stranger doors in London. It looks unremarkable enough at first, until you get a closer look at that tiny sign: 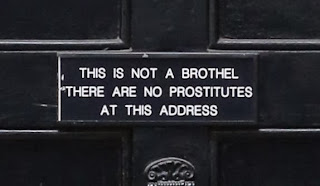 Why someone felt the need to put that sign on the door has long been a mystery to me. Was it once a brothel? Perhaps its neighbors are brothels?

I finally got around to looking up the answer. Turns out the door belonged to Sebastian Horsley, a British artist. Horsley lived in a two-room flat beyond the curious sign.

"If one were allowed to enter – a Byzantine process, often involving multiple rings of the bell and telephone calls – one encountered a cross between a Dickensian grotesque and a Byronic dandy, with just a touch of the ringmaster," wrote Alexander Larman in The Guardian in June 2010.

"Sebastian thrived on organised squalor and considered such niceties as kitchens and bathrooms to be optional luxuries. The focal point of his small but lavish drawing room was an extensive collection of human skulls. If you were female and halfway attractive, Sebastian would normally try to seduce you, less out of lechery than out of what he considered common courtesy. If you were male, similar treatment often awaited."

Horsley himself wrote a few years before he died in 2010 that he meant the sign as "a kind of Dadaist piece," though he claimed to have run a brothel for a while at that location.

"Since it went up all kinds of people have come to stare at it and take pictures of it. It is most galling. I have been upstaged by my own front door," he wrote.
Posted by Steve Reed at 7:04 AM

Well, I guess it's good to get that sort of information right out there. Eliminates doubt, right?

I kind of would like to have that sign for my front door and see if anyone would have the nerve to ask what in the world is she up to now!..made me laugh..

Great sign and great story to go with it. I might just have to come up with something myself. Like, 'no, we did not order a big metal chicken'. Unless of course, we do. Or 'if you are looking for the house with the ostrich, this isn't it'.

I read the info about him at the link - he was just 2 years older than me. What a character!

LOL at Ellen. I wonder what my sign should be? "My husband kisses AT&T Uverse salespeople." :)

London is filled with strange things!