The Park, and Deep Basements 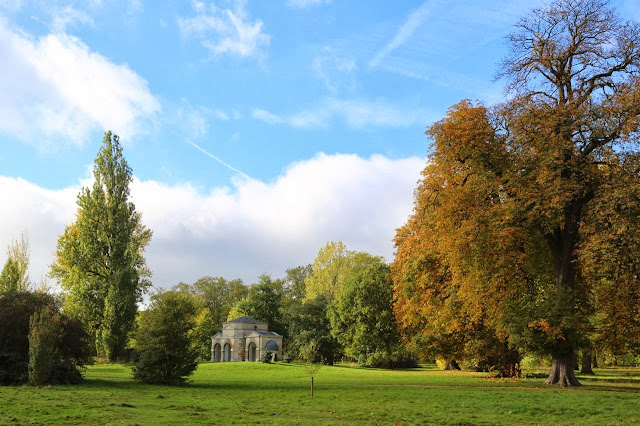 Yesterday was much better than Friday. And that's a good thing, because yes, it was indeed my birthday. Thanks for the good wishes, everyone -- apparently they helped dissipate my bad energy!

Olga and I spent a low-key day around the house. (Dave, you may remember, is away in Norfolk this weekend on band-teacher business.) In the morning we walked over to Hyde Park, where the autumn light was so beautiful it brought to mind English landscape painters like John Constable and J.M.W. Turner. I did not edit the photo above. It really looked just like that. 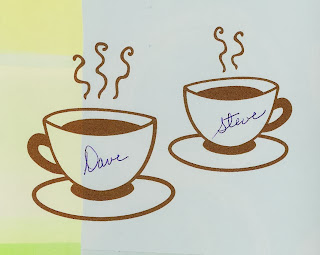 Olga, of course, could not be bothered with the light. She was busy chasing squirrels.

When we came home I ran out to the post office to pick up a package. My in-laws mailed me some shirts for my birthday and included a card with a coffee theme (they know I like my coffee). I love how Dave's mom labeled the coffee cups on the card with my name and Dave's name!

We have a phenomenon going on in our neighborhood -- and I may have written about it before, I can't remember -- whereby a wealthy person buys one of the historic local houses and proceeds to build a vast basement beneath it. (Because after all, if you're a hedge fund mogul or a foreign quintillionaire you can't be expected to live in a merely large Victorian house.) The problem is, these construction projects are incredibly unsightly and disruptive, and they go on for months and months.

There's a house just a block or so from us where the owner is extending the back and digging out a basement beneath the entire yard. The house right now, as far as I can see from the street, consists only of its front and side walls. The interior is gone and all I can see through the front windows is empty sky. It has turned the block into a complete mess -- and it's not solely to blame, because there are two other big renovations going on there as well.

But that's nothing compared to the guy who bought a hotel so he could turn it into his private home, with plans to build a four-story underground basement with a deep diving pool. (He likes to dive, apparently.) I've often passed this building (really two buildings) on my walks and I wondered what was going on there, because they looked abandoned. Well, they were recently walled off from the sidewalk, and construction appears about to begin. I'm glad I don't live next door!

There's a bit of uproar about these "mega-basements" and indeed some boroughs are taking steps to restrict them. It raises an interesting question, though -- how deep does personal property go? Assuming we had the technology, could a person build a basement to the center of the earth? Or is there some depth at which the earth becomes communally owned, the property of all of us?
Posted by Steve Reed at 7:45 AM

A very *deep* question! But seriously, a hotel being turned into a private home didn't provide enough space? A basement had to be built? What do these basements truly represent, I wonder because it's clearly not about space.

I have been reading about this...supposedly (word?) much easier to get the building permits for etc. As my husband would say.."If you have enough money you can get a 747 turned around because you forgot to kiss your wife goodbye"....I also have been reading that a lot of investment money is being spent in London on real estate again....so hopefully the projects will at least be finished before the well runs dry.

Your post could have alternately have been titled, "The Park And Deep Pockets."
Whoa.

You pose an interesting question today. I see a lot of huge houses going up in Phoenix too. People pay over one million for some fancy house, tear it down completely and build something even bigger and fancier. Why do they need all that space? I have a friend who would say "they are compensating for something they lack".
That photo is gorgeous.

What a pain in the ass. I'm talking about the basements.

So glad you had a good birthday! As it should be.

Glad you had a great birthday! That story of ridiculous home renovations really does not surprise me. It's as if people have to invent things to use their money on ....