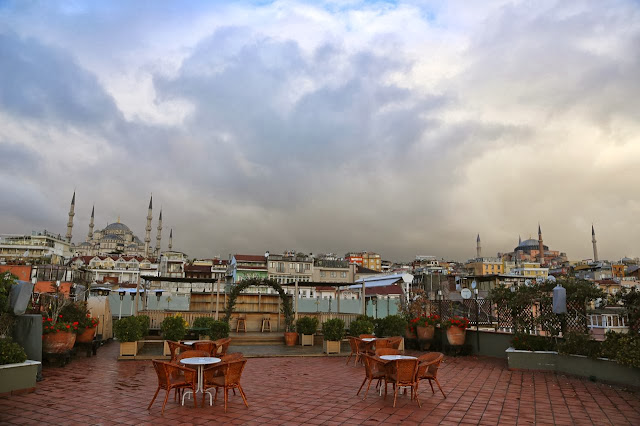 We're here! We arrived last night about 10:30 p.m. Turkish time, and promptly encountered a minor bureaucratic snafu when we were told we couldn't use British pounds to pay for our visas. (You've got to pay cash, but apparently if you have an American passport you can only pay dollars or euros. The Brits can pay with pounds. Why this is true, I have no idea.) So we darted over to a nearby cash machine and got some euros, and cleared the rest of our official paperwork with no problems.

We grabbed a taksi outside the airport and hurtled along a rainy expressway to the old city, the location of our hotel. So far that's pretty much all I've seen. The photo above shows the view from the hotel's roof terrace, with Hagia Sophia on the right and the Blue Mosque on the left. 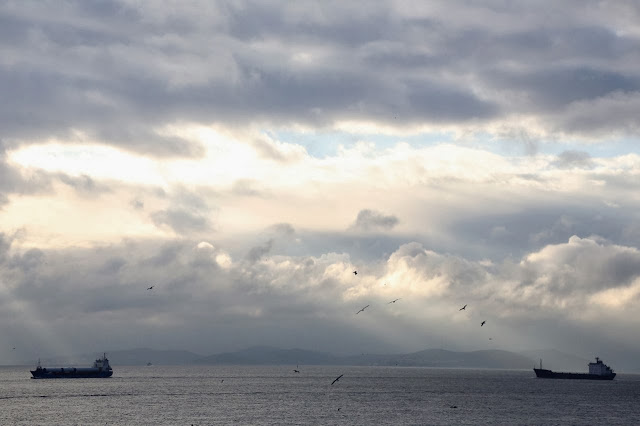 When you turn around on the terrace, this is the view: freighters on the Sea of Marmara lining up to go through the Bosphorus. That's Asia over there across the water. We're technically still in Europe on this shore, as I understand it. 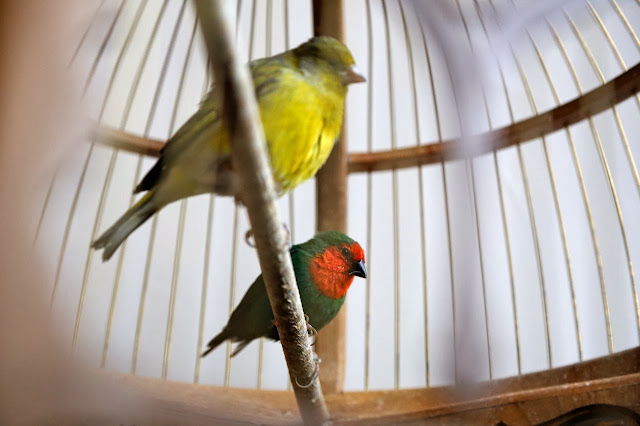 The hotel itself is smallish and hosts a regular menagerie of critters in public areas, like tiny colorful finches in cages. These guys sit by a window with a view of the Blue Mosque, which I hope they appreciate. 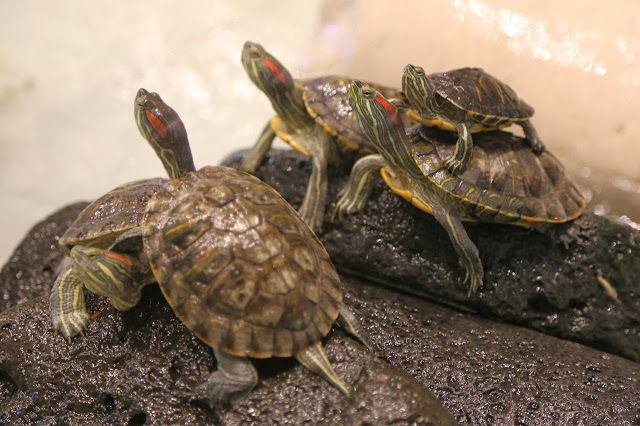 The lobby features a square, marble fountain containing turtles. When I saw them last night, I said, "Those are red-eared sliders!" Dave said, "How do you know that?" And the answer is, I have no idea -- just some random bit of knowledge I picked up somewhere, maybe back when I was a kid with a pet turtle of my own. (He wasn't a red-eared slider, though. He was a cooter turtle of some kind.)

Off to breakfast and exploring! Happy Thanksgiving, everyone!
Posted by Steve Reed at 7:00 AM

Happy Thanksgiving, Steve! With all I have to do today, I wish I were in Turkey with you and Dave.

Have fun! I love the turtle pic.

When I was in Istanbul I tended to go to mosques for prayers and sit on the carpet in the back while the men worshipped in front. Try it: follow the sound of the muezzin and just go in. It'll be one of the few muslim countries where you can do this.

Looks like you got a good location to explore. Happy Thanksgiving.

Ms Moon: Happy Thanksgiving to you too! I'm glad you've tagged along on our trip, if only virtually. :)

Jiryu: I didn't know you could go in DURING prayers. Interesting. I'm impressed we can go in at all. In Morocco, non-muslims can't even enter the mosques!

Sharon: Same to you!