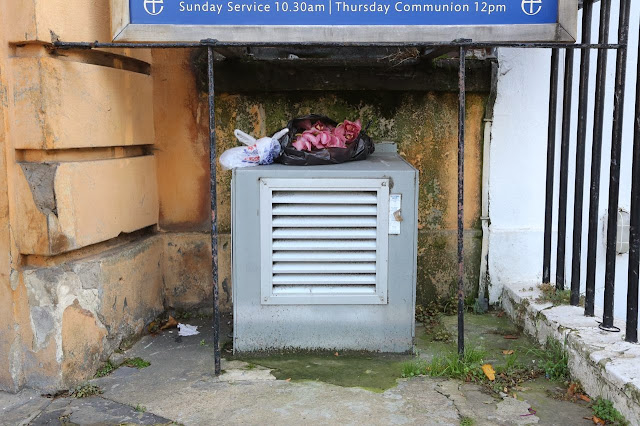 My fingers have started doing this annual thing where the skin at the corners of the fingernails gets so dry that it cracks. It hurts. I have tried all manner of hand lotion and nothing seems to solve the problem entirely. It's like my winter curse. My dad has dry skin problems with his hands, too, so I come by it naturally, I suppose.

Remember the story of how I saw a guy drop £20, returned it to him, and then found another £20 a week later? Well, virtually the same thing happened again. I found a £5 note in the school library beneath a chair. I'd seen who was sitting in the chair, so I asked him later if he'd dropped £5. He said yes, and I gave it to him. (I know -- what else would he say?! -- but I'm familiar with this kid, and I don't think he was pulling my leg.)

The next day, I found another £5 note in the library -- this time with no one nearby. I swear, the universe just wants me to have money sometimes. If only it came in greater increments and with greater regularity. 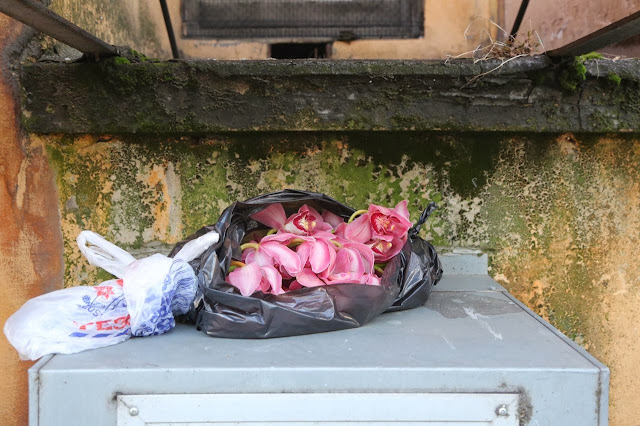 Yesterday at school we had a shelter-in-place drill, in which the teachers lock all the doors and turn off the lights and everyone hides. It was a creepy experience.

Dave and I balanced it out by going to a preview performance of the high school musical, "Avenue Q," in the afternoon. "Avenue Q" in its Broadway form is a quite adult show, but this is a toned-down version appropriate for school audiences. (For example, remember the song "The Internet is for Porn"? Not in this version!) The kids did an excellent job and made me think of my own high-school drama experiences in "The Sound of Music" and "The Taming of the Shrew." It really puts things in perspective to remind myself that they are now where I was then -- what seems like a long, long, long time ago when I thought I knew so much but actually knew nothing, and life had barely begun.

(Photo: A bouquet of orchids I found lying atop a vent unit outside a local church yesterday morning, when it was about 39º F.)
Posted by Steve Reed at 6:24 AM

I love the photos. Here in the big shitty, we call it a "lock-down," and they occur in our schools quite regularly. Sometimes, they're not even drills.

Those orchids are so sad. Why would someone leave a bouquet of orchids?
Yes. I was thinking that Avenue Q might be a bit racy for high schoolers and had no idea that there was a toned-down version.
People rarely drop money in Lloyd.

I saw a penny yesterday but I didn't even bother to pick it up. Last month I saw a dime on the road as I was biking by & I started wondering what denomination of money would induce me to stop & pick it up. I decided it would probably have to at least be paper. Ha!

Who would abandon a lovely bouquet of orchids?

The crazy thing about looking back is that is seems so very long ago, another life, and yet, in the same thought, it all seems to have happened so fast. I think everyone of a certain age probably has this sense. That shelter in place drill? How sad that we even need to practice such things.

my son used to find money on the ground all the time. Mostly $1 bills but once a $20.