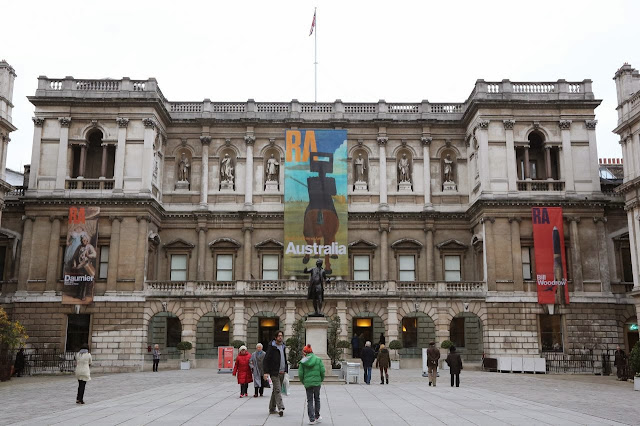 I bet your jeans do look sexy, but new jeans are always great.

A few years back when the daughter of our friends in France came to visit us one of the things she wanted to do was buy Levi's. For whatever reason they are really valued in Europe and very expensive! She bought three or four to take back with her.

I love you for going out and doing things and seeing things and thinking about things and telling us about these things. You are quite literally a window to another world, not unlike that painting.

I saw the signs for that exhibit but, I didn't go in. However, I did spend time walking through St. James Park where I saw all kinds of birds and lots of young people feeding them.
$114.00 for 501 jeans is way too much money. However, looking at my credit card bill, it looks like a few of my lunches were around $40.00. Yikes!

Reya: You crack me up.

Lynne: I've always heard that Levi's in Europe are more expensive, but I didn't realize how MUCH more until now!

Ms Moon: We are all windows onto other worlds, aren't we? :) (But thanks!)

Sharon: There are crazy varieties of birds in that park!

Would it be cheaper to get the jeans online? Or maybe I'll book a trip to London & smuggle you a few pair :)

I hate buying new jeans...not only do they cost big bucks but I can never find a pair that really fit right. Love, love traveling around with you!