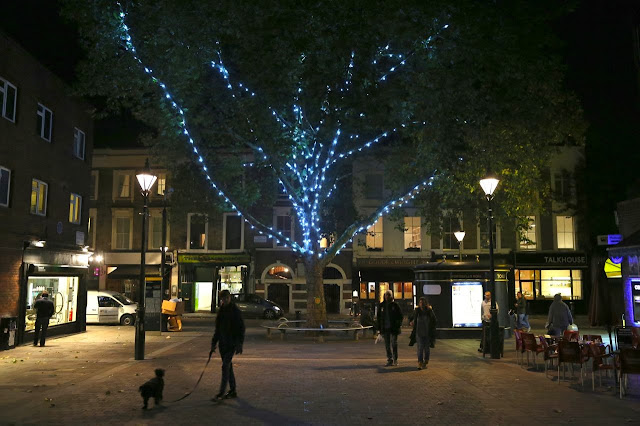 Last night was Guy Fawkes Night, also known as Bonfire Night, when the English rather zanily celebrate the unsuccessful Gunpowder Plot of 1605, meant to assassinate King James I. Traditionally there are lots of fireworks and bonfires, and figures of Guy Fawkes -- one of the bonfire plotters -- are burned in effigy.

In our neighborhood the festivities seemed fairly tame. There were isolated pops and explosions until about 8 p.m., when suddenly they got quite intense for a short time, maybe 20 minutes or so. Then they died down completely -- until 12:30 a.m., when a neighbor set off several roman candles right across the street. (Thanks for that, neighbor.) We've seen and heard fireworks for the past several nights, but it's been unclear which were in celebration of Bonfire Night and which were for Diwali.

Unlike two years ago, I did not photograph or video any of the fireworks. If you want a Guy Fawkes Night experience, just watch the video from back then. It's the same every year, more or less!

Through it all, Olga seemed relatively unfazed, which was a blessing. Some dogs react very badly to all the hubbub; it freaked out poor Ernie back in 2011.

Incidentally, the BBC reports that the tradition of burning effigies is on the wane. Apparently kids used to trundle their homemade scarecrow-like "Guys" along the sidewalks, collecting money, before burning them. The speculation is that children these days are already too worn out by the increasingly popular Halloween. 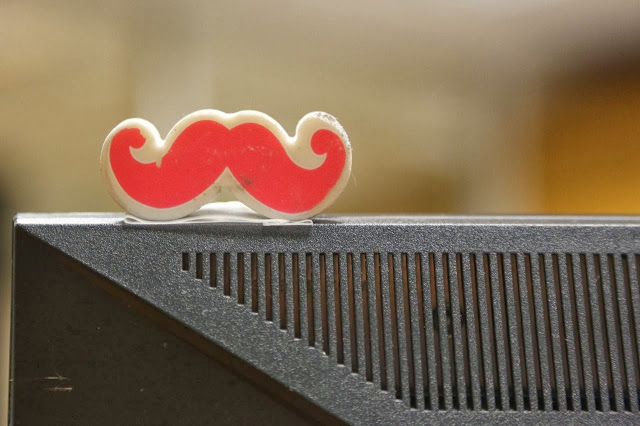 So have you heard about Movember? It's a fairly silly annual event aimed at raising awareness and money for problems like prostate and testicular cancer. Basically, men grow moustaches for the month, and become walking billboards for men's health.

Well, a guy at work sent an e-mail last week drumming up support for Movember among school staff members, and lots of guys volunteered to grow moustaches. So, yes, even I, who have never had a moustache in my entire life (except for a few brief months back in 1995 when I had one in combination with a goatee) -- even I am growing a moustache.

So far, I hate it. Hate it. It's coming in frighteningly gray and it just feels very weird on my face. One of my coworkers (a woman) said to me on Monday, "Steve, are you sure this is a look you want?" Which I took to mean that it looks stupid, too.

But you know, this is all about team building and camaraderie. Appearance is irrelevant. All the guys are doing it, so I'm doing it too. (Dave is exempt because he already has a beard -- though he could have shaved the beard and started fresh, I suppose.)

I may show you a picture at some point, and I may not. Stay tuned.

(Photos: Portobello Square, about 5:45 p.m. yesterday. And a moustache eraser that, coincidentally, I found on a table at school and used to decorate my workplace computer monitor for Movember.)
Posted by Steve Reed at 6:18 AM

Steve, I cracked up when you described your mustache and the woman's comment about it. You are very funny. I have a very good friend who interviewed for a job with that company -- so wild how it's become worldwide. And please, pretty please -- show us a photo.

Here in Arizona I've seen pink mustaches wired to the grill of cars. I wonder if there is a connection.

Yes! Picture please! You know, I have a blog tag called "I have no shame" for just such a picture :)

You cannot tell us all this and then deny us a picture! My son did no-shave November last year for the same cause. I guess you can do that when you're in college and scruff is par for the course.

But you know, this is all about team building and camaraderie. Appearance is irrelevant. All the guys are doing it, so I'm doing it too.

You just summed up the whole Red Sox beards phenomenon.

I really want to see a picture of your 'stache. Are you also growing a goatee?

Is it a look you want? Well - you don't have to keep it forever. Sounds fun.

I guess I'm sort of Scrooge like when it comes to stuff like that. Like wearing pink for breast cancer awareness. I don't think shit like that raises any kind of awareness at all. and who isn't aware of cancer? it's just all a bunch of back patting and doesn't do one iota towards actually curing anything.

I guess a penny for the guy is simply not enough these days. I think that you should dye your mustache a nice bright colour- NOT red- maybe blue, that would be nice.

I remember doing 'penny for the guy' when I was younger but you're right, I haven't seen it done for quite some time. It'd probably be £20 for the guy in the current greedy climate now any way.

They were drumming up support for movember at my work too. I know it's for a good cause and everything but I just can't bring myself to have a moustache, the idea turns my stomach. eek :/ Good luck to you though!

Pictures or it didn't happen ;)

OK, everybody, you asked for it. I will post some kind of photo, in all likelihood, toward the end of the month.

Lorianne, I had never heard of the Red Sox Beards phenomenon. LOL!

Ellen, I don't particularly care for the fundraising component -- the idea of asking people for money to support the causes for which I am growing my 'stache. But I can tell you I've said the words "prostate and testicular cancer" to several people in the course of conversation about Movember, so I suppose it DOES raise awareness. I am certainly more aware of breast cancer and the number of people working against it because of the "wear pink" thing. Is it a drop in the bucket? I suppose. But it's still something.

Linda Sue: A colored moustache would be HILARIOUS. But I don't think I'm that adventurous.

Wayne: It turns my stomach too, frankly! :)