These are Pearly Kings and Queens, members of a network of clubs that collect money for charity. I ran into them at Covent Garden, and in exchange for a couple of pounds they allowed me a photo. Aren't those great suits?

I spoke to the woman in the center, holding the bucket, and she told me their collected donations go toward several charities including nursing and animal welfare. I guess the Pearlies are a bit like Shriners or any of the other social and charitable clubs we have in the United States. 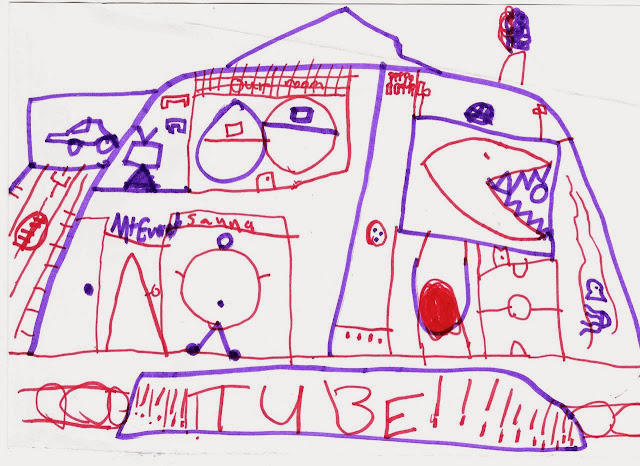 Here's a drawing I found on the floor in the library the other day. I think it's someone's fantasy house, or maybe a new recreation center for the school. It includes a bowling alley, a climbing area labeled "Mt. Everest," what appears to be a shark tank, several sports fields and a sauna containing a big round person. And beneath it all, the tube. Pretty awesome!

Not much going on around here so far this week -- just work and routines -- but I think things are about to get busier.
Posted by Steve Reed at 6:19 AM

Kids' minds are the very best. And sometimes adults can be pretty fun too.

The drawing is awesome! Wow.

I wasn't sure how you would fare in the library, but it seems like a wonderful environment.

I love that drawing. I rode the tube so much while I was there last week I got the impression that all of London is just one giant labyrinth of tunnels. Makes me wonder what keeps it all from collapsing.
I saw those Pearly Kings and Queens at Borough Market the last time I was there back in 2006. I wondered what their purpose was and now I know. Those costumes must get pretty darn heavy with all those buttons on them.

I want to be a Pearly Queen! How cool! Although I expected them to sing for some reason...

I wouldn't mind a mountain or a sauna in my house, but I think a bowling alley might get pretty noisy :)

I wouldn't mind living in that house. And the lady with the bucket needs more bling. Those two men put her to shame.

I have a pair of cottage dolls , Pearly queen and king. I am glad there are real ones...my dolls have contributed nothing to charity!
Lucky art find! I could live there!