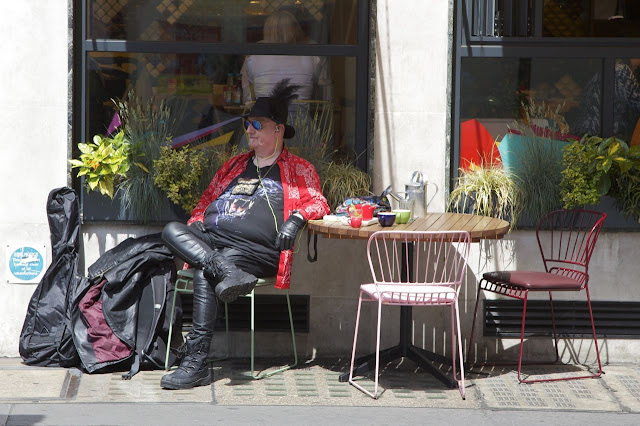 Yesterday morning, I awoke briefly in the predawn darkness. I was lying there, thinking about something or other, when Dave stirred, laughed softly in his sleep and said to me, "There's not enough Chapstick in the world for that." Then he patted my leg and rolled over.

I have no idea what that meant, but it didn't sound complimentary. It makes me wonder what else he says to me in the middle of the night that I never hear. Or what I say to him, for that matter.

So today is both the Summer Solstice and Father's Day. Appropriately I'll be Skyping with my dad later today. I haven't talked to him in months, though we've exchanged e-mails. When we were setting up this Skype appointment, he wrote, "You would not believe how busy we have been around here. We definitely would like to Skype so we can tell you all the ridiculous things we are doing."

Otherwise, I've been catching up on things around the house, like re-ordering all my negatives after my archive-plundering book project earlier this year. I still have more negatives to get scanned. It never ends!

Finally, I can't say much about the events in Charleston, but I do think it's strange that the shooter -- full of all that misguided anger -- is so fascinated with Rhodesia. Apparently it's a phenomenon among American white supremacists to admire Rhodesia and Apartheid-era South Africa. Trés bizarre, as my French teacher would say.

(Photo: Near Oxford Circus, on Thursday.)
Posted by Steve Reed at 7:23 AM

I know what I myself would think about the phrase "not enough chapstiick in the world for that," but that's just me and my evil mind.
It's the solstice! Thanks for telling me. I swear- I had no idea.
That picture- OMG. That's all I can say about that.

LOL -- I didn't take it as sexual. Is that what you're thinking? Dave himself said he has no idea what he meant. But who knows. :)

And yes. I think "OMG" was what I actually said when I saw that guy sitting there.

Well, I had a large supply of chapstick that might have helped the situation (whatever it was), but I recently tossed it out. I was a chapstick hoarder & I don't even use the stuff!

I've been to Rhodesia (Zambia and Zimbabwe) & there is some beautiful country there. I think (I hope) that white supremacists would be disappointed if they went there now - both countries are very African now. As they should be. (Um, and the last time I was there was 1988, so who knows what they're like now!)