The Angriest Dog in the World 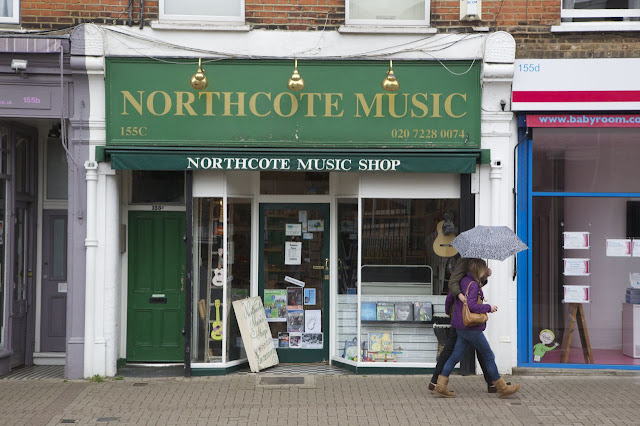 Sometimes I think I must be completely mean and small-minded.

Meanwhile, I read posts like this one from the Tearful Dishwasher which is so full of wisdom and compassion that I just marvel. Or this one from 37 Paddington, about her nephew, who took three homeless men to lunch and talked to them as they ate.

Seriously. It's embarrassing. And given all that I have in the world, it makes no sense.

I've always blamed my cynicism on my equally cynical family -- and believe me, I am a ray of sunshine compared to my immediate relatives --  and on my journalism career. News reporting, after all, fosters a sense of skepticism, and depends, to some extent, on a reporter's innate suspicion that everyone is up to no good.

But Tearful Dishwasher is a policeman. How does he maintain his compassion? His gentleness? How does he not find himself cursing at slow-moving people who make him late for trains? Maybe he does, and just doesn't write about it. I don't know.

I worked for years as a Zen practitioner to acknowledge this inner anger, to meet it head-on. I'm not sure I was ever successful, because it's still there. Then again, Zen practice doesn't really make it go away, so much as teach us to see it and be aware.

And now I don't even really practice anymore.

I wish I had it in me to take homeless people to lunch, or to not suspect that President Obama gave soldiers a medal of honor at least partly for political reasons. Or not to let the political reasons obscure, in my mind, the deservedness of those soldiers. I wish I could see each student and each interaction at work as a new interaction, a fresh start, rather than sometimes thinking, "Oh, God, you again."

Why am I such a crank? 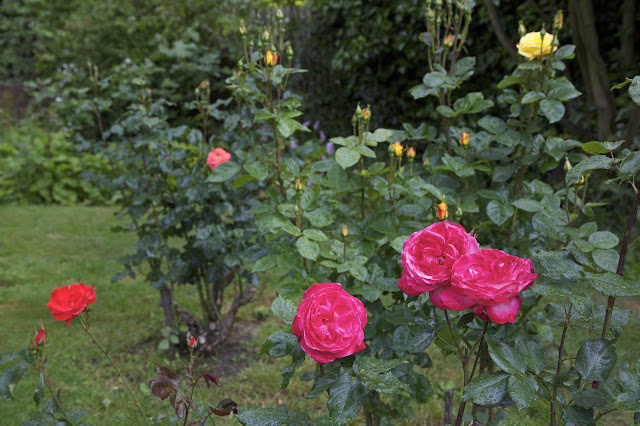 On a brighter note, here are our roses. We have seven bushes in bloom right now, in numerous colors, and as you can see, that yellow one -- where the bulk of our ladybirds are now feasting -- has lots of buds nearly ready to open.

I mowed the lawn yesterday after work, and against all evidence I'm afraid I may have sucked many of our released ladybirds into the grass collector.  There are still plenty of them on the roses, though, so I thankfully didn't get all of them. (I don't know if they'd really be down in the grass. Maybe they flew away to other bushes. One can only hope!)

(Top photo: A music shop in Clapham, on May 24. Credit to David Lynch for this post title.)
Posted by Steve Reed at 8:16 AM

You've never struck me as either a complete cynic or a total crank, but maybe further exploration would help you understand yourself better.

Living intne city can make you angry
End if

I think you're right - being more mindful makes you aware of your anger more. It doesn't mean you are necessarily more angry than other people. I have been noticing the same trend in myself and my children lately. We all need summer to be here and some time off from the constant pressure of the alarm clock and our rigid schedules, I think. I try to remedy some of it by being kind to myself and teaching the children to be kinder to themselves as well.

Oh and thank you for sending me over to those other blogs. Gorgeous posts!

We're a lot a like in that regard and as much as I dislike that part of my personality, I've come to the conclusion there's not much to be done about it--I am who I am. However, I do think being mindful of how your treat others is a great way to make sure it doesn't rage out of control. That, and a willingness to apologize when it has.

And thanks for the old David Lynch reference... I'd totally forgotten about that angry dog!

If anything, I would have described you as upbeat. See what a good writer you are - you've succeeded in masking all those oily, murderous thoughts roiling around within!
No, I'll take a cranky skeptic over a faultless humanitarian any day. The first is much more interesting.
And when I spend any time with the second, I come away feeling unworthy to be in their company and even more flawed than I am already!

I think I channel my anger (and there is plenty of it) to people I will never meet. People in the media. Politicians. Bill Cosby. Etc. On a day-to-day level I just sort of let things slide and find enough compassion in myself to excuse a lot of stuff.
But honestly, I know that I am very angry at a lot of things and occasionally it slips out and it's not pretty. So...I'm not very evolved here. Not Zen at all.
We're human, Steve. We are.

Steve, a wise therapist (who sadly is now retired or I'd be in her chair every week!) once told me that when we hold ourselves to a very high standard, it can make us really angry when other people don't do the same. It's like, we're making the effort, goddammit, why can't you? I think you hold yourself to a much higher moral standard than most of the world; it is part of what makes you such a genuinely good and kind human being, but perhaps when you are tired (such as at the end of the school year when everything is so chaotic), all the not-holding-oneself-to-a-high-standard that other people do can seem particularly glaring. And galling. I think you need some down time. Perhaps you've been in the world too much for too long a stretch and you need some solitary time to recharge. You're a writer, and writers need time to go inside, to reconnect with self, to make sense of things. Summer holidays are almost here. Hang on, friend.

And thank you for the link to my post about my amazing nephew. He is really something special.

P.S. Your roses are spectacular!

I agree with 37paddington... we think everyone should do/act as we do, they don't.
i roll my eyes and wonder...who raised you !!
we are all different and they can't be perfect like us ha ha (just kidding)

E: I'm not cynical by the standards of your average newsroom! I think understanding comes when I think about my relationship with anger itself. I'm not comfortable with anger, nor with allowing myself to BE angry even though it is a completely human response. So then when anger comes I wind up inwardly magnifying it and then chastising myself.

John: You're right! That's part of it too! Too many rats in the cage!

MWA: Some of this is definitely due to the time of year. Just one more week to go!

Kevin: Yeah, I think I just have to accept that I am going to have these moments. For whatever reason, it's who I am. Why am I not PERFECT?! (I loved that Angry Dog comic. We used to run it in the Oracle. I have a shirt with the Angry Dog on it.)

Marty: Well, that's exactly true -- I DO mask my darker impulses. But don't we all?

Ms Moon: Amen to that. Here's to being human. As I said to E, I think I should get better at simply acknowledging my anger as a human response. Maybe at forgiving it in myself. (I get mad at the pols too, but honestly they just make me feel more tired. They definitely feed my cynicism, though!)

37P: That is a wonderful thought, and I hope it's true, though it makes me sound like a much better person than I suspect I actually am. And WHY CAN'T PEOPLE RETURN A BOOK TO THE LIBRARY ON TIME is what I want to know. :)

Vivian: I was raised by wolves. :)

Raised by wolves? ˆ hope your mother doesn't see that!

missed this yesterday because I left the house early. I wouldn't call it anger so much as impatience or annoyance. we all have days like that sometimes for good reason, sometimes not. it's only a problem, I think, if it seems to be the majority of your days. it may be innate. I'm pretty laid back and usually don't let little things get to me. my sister however, is constantly in a state of stress, most of which she fabricates in her head it seems to me. perhaps it's control issues. for her I think so. it's OK not to be in control of the world around you.

re the mowing. don't use a grass collector. that cut grass is what nourishes the ground so the the grass grows well. we have a mulcher on our mower (a riding kind so don't know if your push mower has this option) and it chops the cut grass up very fine so it doesn't lay heavy on the grass.

I think acknowledging your anger is a huge thing. You have always struck me as a person with strong self-awareness and capable of such beautiful stillness. I disagree that anger and being Zen are contrary -- I think there's a place for anger beyond even righteous anger.

I missed this post but I'm glad I caught up with it/you tonight. I have been having a lot of anger the past week and it's connected with huge stress in my life right now and with other people in my life who I wish were being less ... self-oriented ... to put it politely. As my stress has eased I have gone back to equilibrium. I do like 37P's thoughts on this. And will continue to examine my own reactions to try to do better in the future. Good luck with your last few days and I hope you get some downtime; I'm pretty sure you need it about now.