Ladybirds, and 'The Shallows' 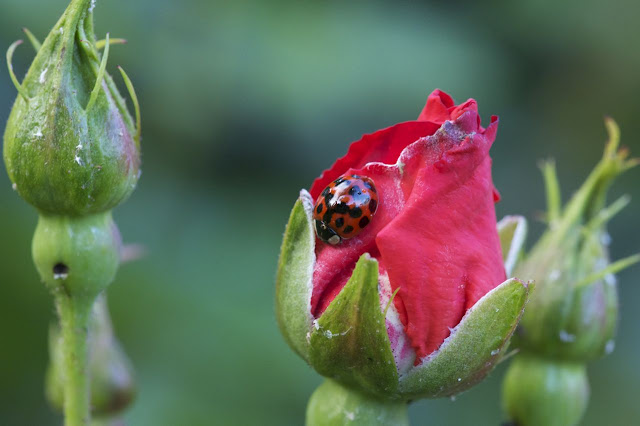 The ladybirds are still hard at work on the aphids in our garden. They really are bug-eating machines. There's a visible difference on all the plants. Dave ordered a second box of ladybirds, and we'll release them when they arrive, probably this afternoon. Hopefully there are enough aphids to go around!

I slept really well last night. I was exhausted. Yesterday was another busy day, beginning with a dog walk to the cemetery (no squirrel death) and then a 2 1/2-hour high school music concert. (Long, but excellent.) Dave still has three more concerts to go this week -- all middle school -- so I'll be making dinner and watching Seinfeld (or reading, or maybe even studying my French) on my own! I'm kind of looking forward to the alone time.

I also finished Nicholas Carr's book "The Shallows," about the ways Internet use is rewiring the human brain. It was a little heavy on neurobiology for me, but the ideas are interesting. Basically Carr says the Internet -- with its hyperlinks, flashy pop-ups and cluttered pages -- trains our minds to flit from one thing to another rather than concentrate on a single task or topic for a long period of time. And it's not a matter of forming a short-term habit -- rather it's a retraining, a rewiring going on in our brains.

I'm sure there's some truth to it. I've heard enough people say that they have trouble reading long books or articles these days. I myself notice that I don't concentrate as easily as I used to, and (contrary to appearances!) I don't think I'm even a heavy Web user. But there's also something to be said for the vast knowledge -- or at least the vast collection of facts -- the Internet puts at our fingertips.

I heard a teacher at school say the other day that we no longer need to teach kids things like the capital of Nicaragua, because the Internet makes such facts easily available. Now the emphasis in education should be on finding and  processing information, rather than storing it, she said. I'm not sure I agree with that -- don't thought and imagination arise from collections of facts we store in our heads? How would we write a novel if we didn't know enough to build a plot? But it's one of the changes Carr also discusses -- we shuffle facts in and out through our short-term memory, but less and less is being preserved.

(Addendum: I just realized the ladybird in the picture is not one we released. All ours were two-spots, or orange on black, and this one has many more spots. Interloper!)
Posted by Steve Reed at 6:48 AM