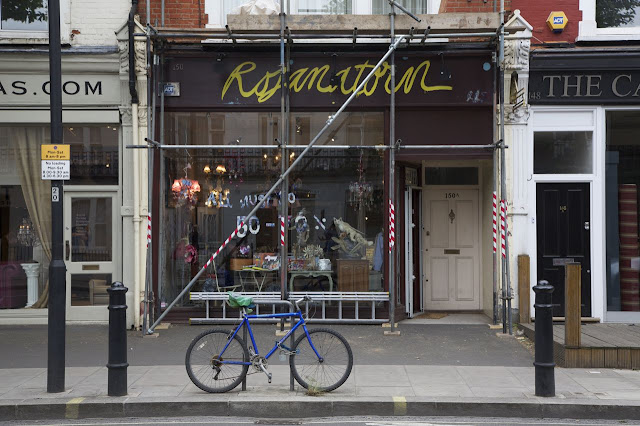 Good grief, the days are passing in a blur. There's a lot going on, but none of it seems very blog-worthy. Collecting books before the end of the year; departing students; summer checkouts; blah blah blah.

I am trying to be more dedicated in my French studies. I'm never going to learn this language if I just go to class once a week and throw together my homework assignment every Friday night.

Someone told me about a great website called Duolingo that offers language practice, so I've been using that, in addition to going over our textbook assignments. And a French teacher at school told me about a website where French broadcaster TV5 posts news clips as a language-learning tool, and then quizzes the viewer about what they've seen. I need more practice speaking and listening and thinking off the cuff, so I tried it, but I gotta say -- the French in those news clips is like a rushing river. I understood maybe three words on the first pass.

Sometimes I try to translate things as I do them. Last night I threw Olga's Kong in the back garden and it flew over the wall. This isn't the first time that's happened, but this time the situation was more challenging -- there was no caretaker to let me into the back garden of Yale Court, the adjacent block of flats where the Kong landed. I rang a few neighbors to let me in, and fortunately found a kind and trusting woman who gave me access. I retrieved the Kong, much to Olga's relief. And I was proud of myself for being able to describe the entire episode in French, albeit probably slightly incorrect French. (I test myself with Google translate to make sure I'm close.)

I'm staying busy on the photography front, too. The Royal Photographic Society offers a distinguishing credential called "licentiate" in which judges review a panel of photographs for a certain level of skill. I'm going to a licentiate advisory day later this month with a panel of my own pictures in an effort to achieve this credential. I'm having ten photos professionally printed -- a process that, of course, has turned out to be more complicated than I expected, largely because of the inept printer I chose -- and then I have to figure out how to get them mounted. Should I try to do it myself, or take them to a frame shop? Stay tuned!

I was featured in this month's RPS magazine, along with several other photographers, in an article about the Bleeding London project. They printed two of my photos, this one and this one. It was cool seeing them in a big glossy magazine! The Bleeding London exhibit kicks off in a little more than a month, and I can't wait to see how that comes together. 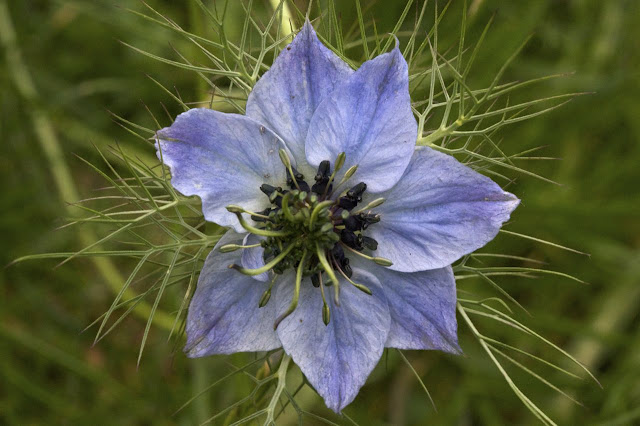 Here's our latest garden discovery. This strange, feathery plant grew up from a crack in our rocky garden wall. Dave and I decided to leave it and see what it would do. We called it the "carroty thing." Well, the carroty thing has bloomed -- and apparently it's a garden flower known as love-in-a-mist. It must be a hanger-on from a previous resident. Pretty cool, huh?

(Top photo: Rojanatorn, a shop in Chelsea.)
Posted by Steve Reed at 6:58 AM

It is so cool -- flowers never cease to amaze me --

Could you use some French vocabulary books and a dictionary? I asked before and got no answer....

I love seeing your photos recognized and that last flower is so cool...

That is the beautiful Nigella - not the celebrity cook - but this one:

Okay. First off you say there's nothing to blog about and then you go on to announce really, really cool stuff. Steve- you are so funny! Your photos are wonderful and you have worked so diligently and it's wonderful to see you honored.
Learning French and applying for a licentiate? I mean...whoa! Who does that??
You do, Steve Reed. You do.

great pictures of course and how cool to see them in a magazine. I still get a kick out of the fact that a major portion of the images for Bleeding London were shot by an American. and yes, love-in-a-mist. you might remember I planted some to bloom in 20014 hoping they would reseed. well, they did, plus I scattered more seed this past fall so I had them blooming all over the yard this spring. mine started out all white, then I started getting a few pink ones and then finally blue ones started showing up. I didn't know it it was different plants or the same plants changing color over time. so I was surprised to see your blue one! mine have all gone to seed now.

I love those photos they chose to print and I can't wait to hear about the upcoming exhibit. I admire you for learning French. Personally, I think it's a tough language to learn. The pronunciations make no sense to me.
A blogging friend from Toronto had a street shot on her site today that made me think of you immediately. It's the kind of shot you would have taken but, I bet you would have waited for someone to walk past before you snapped. You can see it here: http://occasionaltoronto.blogspot.com/

I agree with Ms Moon - no news? YES NEWS! And so deserved on the photo front. I very much like your Bleeding London photos. There is always a point of interest in your shots that makes them more than just a location.

I admire your dedication to learning French and using it when possible. Long ago I decided to eat with some French-only delegates at a conference because they had sat alone at every other meal. My high school French was no match for the onslaught of conversation after my first question to them. I could speak it but I couldn't understand it! Awkward :)

My husband is trying to upgrade his high school french before we go back next month for a week. Anyway, he found a website www.newsinslowfrench.com which he says is really helpful. You have to subscribe (US$22 for one month, plus they have other packages to choose from) and you can pick beginner, intermediate or advanced. You hear the news spoken (and can adjust the speed) plus it has written text and an English translation. He's quite impressed with it. Last time we were there he spent his days saying "I don't speak French" (in French) so he's hoping to do better this time.

Well done on the picture front! I vote for having them professionally mounted (unless you've done it before) - it seems like it would be annoying to have to try to do it yourself. But that's just me - I can't even tell if something's straight, much less MAKE it straight. Ha!