A Dinosaur of a Virus 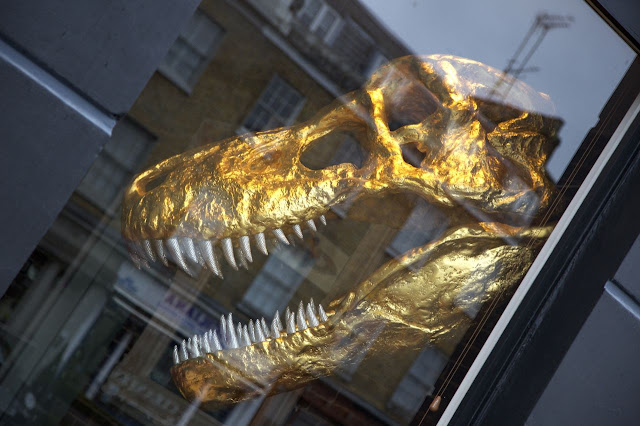 On my walk to work I pass this office where a huge, golden dinosaur skull hangs in the window. It has sparkly teeth. I don't know what it means, but I kind of dig it. 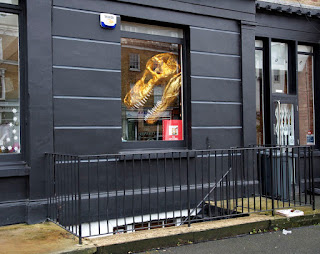 Maybe it's a metaphor for our lives right now, because things have gone awry around here. Dave, who has been dragging a bit this week, felt seriously ill yesterday morning. He got himself to work in order to conduct his final band performance and then came home and got into bed. I was unable to reach him by phone all day because he was sound asleep. When I came home in the evening, I woke him up and we took his temperature -- nearly 103º F!

Now, he'd been lying under blankets for hours, so I'm guessing that was a bit exaggerated. But still.

We had plans to attend an IMAX screening of "Star Wars" with others from school -- in fact we'd bought tickets in advance for £20 each. But obviously Dave didn't feel like going (that's when I knew he was really sick, because he's been looking forward to this movie for months) and I couldn't very well traipse off to see it without him. So we had to let those tickets slide.

And now, of course, I'm wondering what to expect regarding our trip to Florida. We leave on Monday. I don't have time to get sick and get better.

Hopefully Dave will have time to recover and if I get this bug, hopefully it will be less severe with me, and over by the time I fly overseas. Some of Dave's coworkers have had it, and it seems to differ substantially with each person. Dave's entire department is run-down, having just come off an insane two-week period of almost nightly concerts and performances, and in fact Dave was sick at this same time last year.

But seriously. I cannot believe this timing. We can't bring all our family members a mysterious European flu for Christmas! Fortunately when we first get to Florida we'll be staying in my dad's guest house, which is a separate structure unto itself and I suppose if we were sick we could hide out there until we're better, without fear of infecting anyone else.

I stole that little sunrise/sunset symbol from a Web site I visited yesterday, just to show you how dark it is in London right now. Even after the sun manages to crawl above the horizon, it's almost never very bright. Which is another metaphor.
Posted by Steve Reed at 8:10 AM

Bummer. Traveling while sick is awful. I hope the bug bypasses you altogether.

isn't it amazing how these things always happen right before traveling? or before you're scheduled to see a newborn or an older person or anyone who really shouldn't be around germs?? will be thinking healthy thoughts for the both of you. save travels.

it's the lack of sun that keeps my from moving north, even to the more temperate spots. I guess your summer days are longer than mine though. when I was in Canada this past summer, the sun rose about 5ish (I don't remember, maybe earlier), and set about 10. sorry to hear Dave is sick. hope you don't get it. my husband has been sick all week with a cold so we slept in separate beds for three nights. so far I'm holding steady.

Oh no. Oh no! I would be freaking out, Steve! Which of course would do no good whatsoever.
Just hang on and see what happens.
Sending love to you both.

SO disappointing. Missing the movie and now waiting for the other shoe to fall for you. Go get your hands on some zinc tablets. Oh, and see if you can get lots of rest in between keeping Dave alive.

Do they give flu shots in the UK like they do here? I get one every year and so far I've been lucky not to get a serious bug. Load up on zinc and vitamin C. Good lord, I sound like a mother and I don't have any kids.

Oh, I feel for you ... Just take things day by day. Fingers crossed that Dave gets well quickly, the bug bypasses you, and travel goes smoothly. (Personally I would be hyperventilating; my husband on the other hand just shrugs and says, we'll deal with whatever happens, if and when it does ...)

Oh DANG, poor Dave, and poor you, take a ton of zinc maybe, Get some tamiflu if you can for your trip. STAY WELL! You could have given your tickets to Sarah and Andy, I think they would have liked that ! Flu has been going around here but it seems to be a 24 hour thing, hoping that Dave's is that sort.

Oh no! Not after all your plans! Here's to hoping he feels better soon. This is nothing quite as miserable as flying when you are sick. Ugh. Wishing for the best!

Oy. I'm so sorry to hear of the ailments. Can you possibly load up NOW with Vitamin D-3, Zinc, etc. Or some Chinese Yin Chao?

This illness Dave has picked up isn't something that requires a visit to a doctor is it?

Or would a serve of first class chicken soup help?