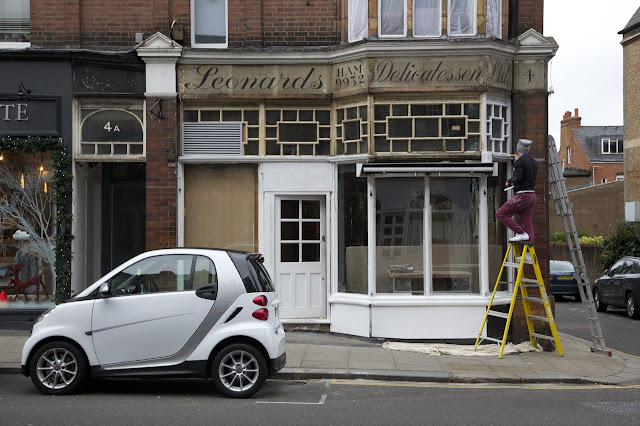 Remember a couple of weeks ago when Olga and I walked past the old camera store in Hampstead and found workers dismantling the shopfront? All we could see was a bit of old sign underneath saying "Leonards." No one seemed to know what Leonards was. 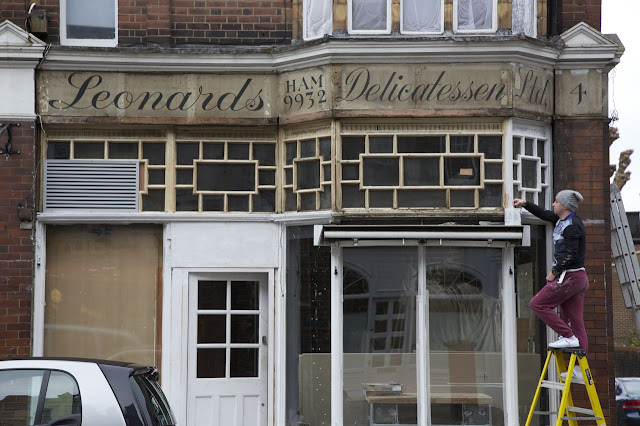 Well, now we know! Olga and I found the shop in this condition on Sunday. I was afraid they'd have the old sign removed or covered up by the time I saw the place again. I'm glad I didn't miss it in its entirety.

And look at those beautiful old windows that have also been revealed, below the sign itself! 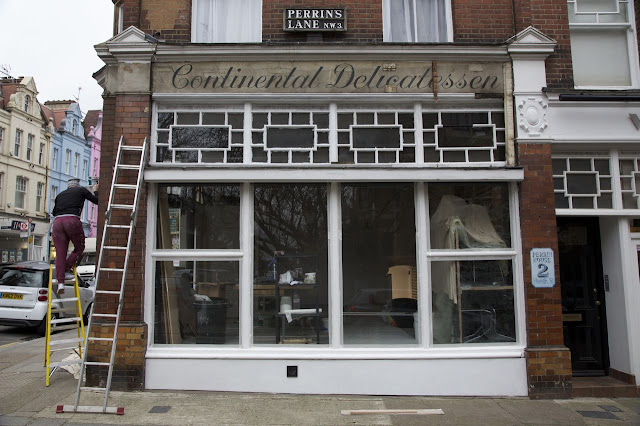 I'm sorry to see the camera shop go, but I must say, I think the storefront is going to look better.

In other news, I'm having a torrid little fascination with photobooks lately. I bought James and Karla Murray's second book of New York shopfronts, as well as a retrospective book of Joel Meyerowitz's work and a Phaidon book called "Photo Trouvée," made up entirely of found photos from flea markets, junk shops and rummage sale bins. Maybe this is to compensate for the fact that it's hard to take my own photos at this time of year because it's so freaking dark.

The father of one of my oldest friends died at home the other day, rather unexpectedly. I was so sorry to hear it -- in fact he'd been planning to attend our wedding party on the 29th and I was looking forward to seeing him. I'm a little surprised at how sad I am about it, considering I rarely saw or communicated with him.

Perhaps you saw that Holly Woodlawn, one of the transgender actresses who orbited Andy Warhol back in the days of the Factory, also died a few days ago. Dave had a student concert last night and I was alone in the evening, and I tried to watch "Trash" in Holly's honor -- but it wasn't available to stream from iTunes or Netflix. Bummer.
Posted by Steve Reed at 6:30 AM

We were all wong

Hard to predict how we'll react to someone's death. Sometimes maybe it's because we have a picture of this person firmly in our mind, along with the memories that surround him. We may not have been close to the person, but he's woven into past experiences and happy memories.

Dying suddenly isn't the worst thing.
Leonard's is going to be a classy joint, it would appear.

So glad you caught Leonard's before something happens to destroy it, or jazz it up. Agree with Ms. Moon, about suddenly dying, seems a blessing.

Is Bummer a new streaming facility? I hadn't heard of it. Catchy name though.

Those windows are beautiful, yes. I wonder if they were covered on the inside of the store as well.

I've been surprised quite often the past while at how sad I am - or conversely not sad - about various losses. The mind is a funny thing. I'm sorry that you won't get a chance to catch up with your friend's father. Will you get to see your friend?

I'm sorry for your loss. We feel what we feel, whether it makes objective sense to us or not.

I'm sorry for this loss and hope your friend will be okay.