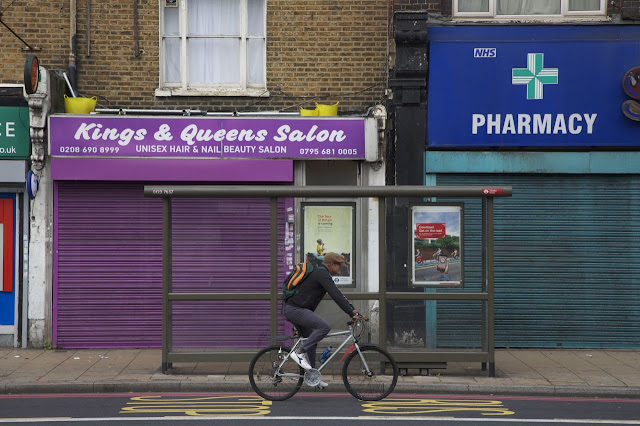 We had our office holiday dinner last night, at a nice little restaurant near Baker Street in Marylebone where I was literally pressed elbow-to-elbow with Dave and my co-workers around a long table. (Language side note: One of my blog pals has protested when I use the term co-workers rather than colleagues, but they're not quite the same thing, are they? I would describe most of my co-workers as colleagues, but some of them I don't know very well or work with very closely, so they're more co-workers, or so it seems to me.)

Anyway, it was fun, mainly because the wine kept flowing and we started with "Bloody Mary soup," which came with an actual shot of spicy horseradish-infused vodka. I'm surprised I wasn't standing on the table naked singing "We Three Kings" by the end of the night.

As evidence that I was somewhat boozed up, however, I offer the evidence of the white elephant gift exchange.

We were each asked to bring a wrapped gift -- something tacky, maybe something we'd been given previously that we didn't want. We were then assigned numbers, and we chose the gifts one by one, with each of us having the option to take either a new gift or the unwrapped gift of a colleague who'd gone earlier in the process. (I'm sure you've all done this at one time or another.) 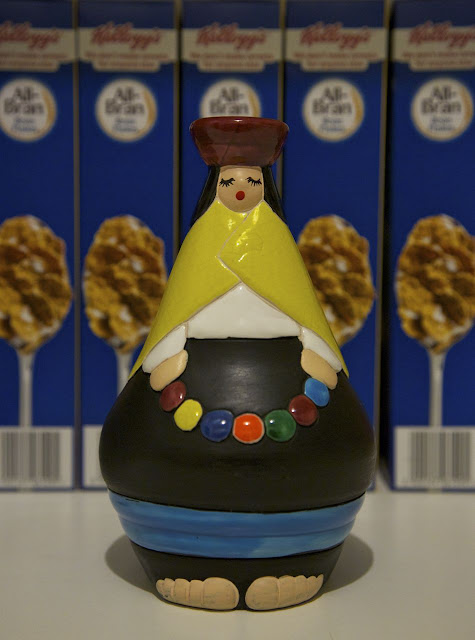 Here's what I wound up with. (Bran cereal not included.)

She's a bottle. She has a cork in her head. I was boozed up enough last night that I actually thought she was sort of groovy. When I looked at her this morning in the harsh light of the pre-dawn kitchen, I wasn't so sure.

But we're keeping her, at least for the time being. She has two black braids hanging down her back that you can't see in the photo. We've named her Juanita.

Anyway, we had a good time and today I am off to my final French class of the term. I'm going to sign up again, though, so the saga will continue aprés la Saint-Sylvestre. My classmates and I are going to lunch together today -- a little fête to celebrate our dubious progress.

I also owe Olga some time outside so I hope to get out with her this afternoon, and then we have some friends coming over for dinner tonight. A full day!

(Top photo: Lewisham, in September.)
Posted by Steve Reed at 7:31 AM

Juanita is my Mom's name, rather WAS, She died. I have her ashes in a ginger jar and bring her out for special events. So, of course your bottle is beautiful with a name like Juanita!

Juanita is pretty groovy but yeah- those feet. Whoa!

One drawback (or bonus??) to retirement is no more workplace Christmas parties.
Yours sounded like fun, though.
And I agree - colleague suggests a level of collegiality. I'm sure everyone has had co-workers that were not colleagues.

Juanita seems the perfect name for this colorful piece. Sounds like a fun time at your party. I have a friend who does that exact same kind of gift exchange every year.

How come you have so many boxes of "All Bran" Steve? You must be addicted to the stuff or you have serious difficulty with bowel movements. Juanita's body shape also suggests persistent retention of the brown stuff.

What was the designer of that piece thinking, putting those feet on that cool lady?

In Canada I don't think we generally use the word colleague. We are just "co-workers" and it has no connotations either good or bad. But I live in the boonies, so I may just be backward :)

Oh, the English language and how it is used depending on where you stand.
How did I refer to the people I worked with? Most likely 'the people I work with' - there were so few of us I usually referred to them by name.

Juanita is something else isn't she?

Marty: Definitely a bonus, I'd say.

Sharon: Everything's fun with Juanita and a vodka shot!

York: I knew someone was going to ask that. I eat cereal EVERY morning, not because of "difficulties," although it certainly helps in that respect too. Dave likes to stock up so I never run out!

Jenny-O: Yeah, you gotta wonder who thought the feet were a good idea.

Soup: The variability is actually quite fascinating!

Our office party is tomorrow - it's an odd assortment of miscellaneous people, but we usually have a good time. We try to give cool presents though instead of true white elephants - I made a pair of bright orange fingerless gloves for the event. And these are co-workers, definitely not colleagues - they're not even in my department :)

I LOVE Juanita! Even her feet - I think they're the best part about her. Ha!