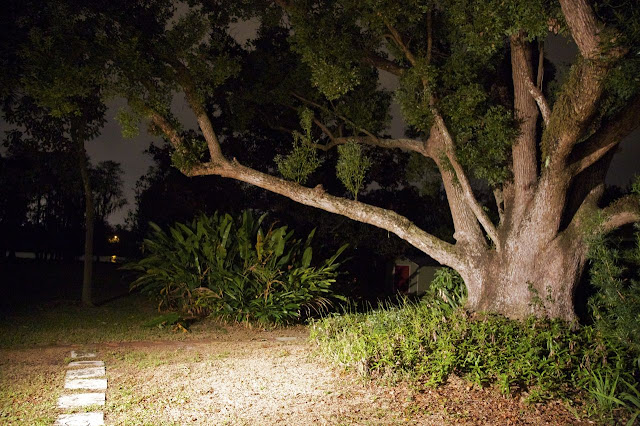 It's 5:25 a.m. here in Florida, ridiculously early, but of course my body thinks it's 10:25 a.m. -- ridiculously late. So I've been up for a while, having coffee and taking photos in the dark side yard of my dad's guest house. I've probably been annoying all the neighbors by repeatedly setting off the motion sensor lights, but don't they create a cool effect on that big ol' camphor tree?

I was only out there about ten minutes and I was gnawed by mosquitoes. It's DECEMBER. The mosquitoes are supposed to be dead by now. They did not get the memo.

Our flight was OK, but really, really long. We were on that plane for 10 hours and 20 minutes, about an hour longer than usual. Strong headwinds, said the pilot.

Also, for some reason, British Airways decided that Dave and I didn't need to sit together -- despite the fact that we booked our tickets together. I think this is because they offer a scheme by which you can choose your seats ahead of time, but it costs extra. They basically punished us for not spending that money.

I did, however, get a gin and tonic, and I sat between some guys who weren't terrible traveling companions. The worst I can say is that one of them listened to his iPod for most of the trip and continually played air drums and jiggled his leg to the beat -- which jiggled our whole row of seats. I looked over at one point and he was listening to a song by The Vibrators, and while I don't know their music, I was feeling their rhythm. (That is not a dirty joke, I swear.)

I read "The House on Mango Street" by Sandra Cisneros, a charming and vivid little book of vignettes about growing up in a poor urban neighborhood. My favorite line: "He has two little black dogs that go everywhere with him. They don't walk like ordinary dogs, but leap and somersault like an apostrophe and comma."

I also watched "Bridge of Spies" with Tom Hanks, which was OK, and started the book "Is Fat Bob Dead Yet?" by Stephen Dobyns, about a network of gangsters and con artists in New England. I bought it for the library based on a positive review. (And the brilliant cover, which -- for plot points too complex to relate here -- features a beagle puffing on a cigarette.)
Posted by Steve Reed at 11:03 AM

I hope you can get a nap later. How are you feeling?

I'm glad you arrived in one piece, even if your flight reminded me of why I'm beginning to hate travel.
House on Mango - I used that in the classroom for several years. THE best book to teach similes, metaphors, and imagery - there's one or the other in every sentence. Great Gatsby is like that, too.

Yes. Mosquitoes. They are horrible.
I am just so glad you made it safely.
e is right- a nap will be in order today. How strange! As I type this, we are in the same time zone! Good morning!

yah, I was swatting a few mosquitos myself yesterday while I was working in the shop. I don't really mind the (so far) non-winter but it would be nice not to have to deal with mosquitos all year long. too bad about your flight. 10 hours of jiggling would annoy me and I used to be a jiggler. do y'all book your tickets separately? have you tried booking them together as a family?

The cover of "BOB" - I thought it had something to do with using beagles for tobacco experiments, remember those horrid photos in LIFE magazine...You get a lot done even when you are glued in between travelers! Glad you arrived safely , hope health improves in the warmth and sunshine and party day atmosphere, so exciting! Congratulations again, pretty damned cool!

You really are a brave soul letting the airline pick your seat. That is one thing I would never do on a long haul flight. Of course, picking a seat is now guarantee of a pleasant flight either. Glad you made it safely and impressed that you read one whole book and started another and saw a movie too! I hope you are having a great day in sunny Florida.

"HEY! LIMEY! Use your goddam flash one more time and I'll shoot ya!"

Most airlines allow free seat selection ahead of flights. I ma surprised that BA charge for this.

Mike & I were not seated together for our flight to San Juan, but he was able to fix it for free for the flight back. Which was 4.5 hours & about at my limit to tolerate. Ugh. Glad you're there safe & sound!

Welcome Stateside! That is a fantastic photograph. I love the London scene in the previous post too. You really take us there (wherever it is you happen to be pointing your camera). I hope you have a wonderful holiday and that Dave is all the way better now.

Glad to hear you made it and things sound pretty good (except for the mosquitos)!

The wonder of the internet - you travel for over 10 hours by plane, land on the other side of the planet, and don't even skip a beat blogging :)

Going to the dark side of the garden.