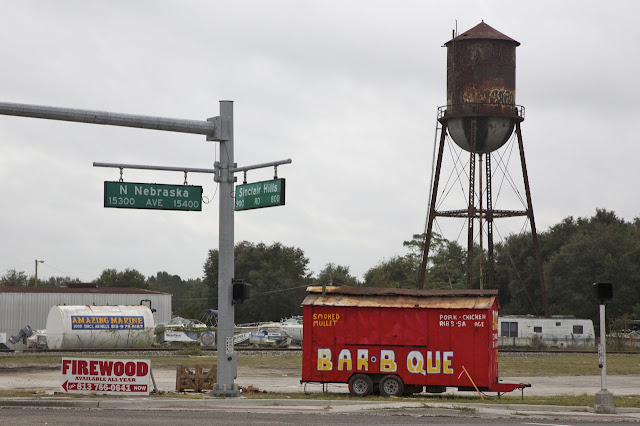 Dave and I finally went to see "Star Wars" yesterday. He's been itching to see it since it opened, and since we had to abandon our plans to go last week due to his cold. (Which is pretty much gone except for residual cough, thanks for asking.) We liked it a lot. It's a very skillful retelling of essentially the same story as the first movie, but set several decades farther into the future.

It was great to see Harrison Ford, Carrie Fisher and Mark Hamill in their old roles, though it does drive home the fact that the original was filmed almost 40 years ago. Youthful insouciance and swagger is now tinged with vulnerability. Just as I teared up when I saw Leonard Nimoy reprise his role in the newest "Star Trek" franchise, I teared up seeing those three again. We were all so young. (Well, I was 10 -- really young!)

Before the movie we went to lunch at Village Inn with my dad and stepmother, and found this perplexing message on the sidewalk: 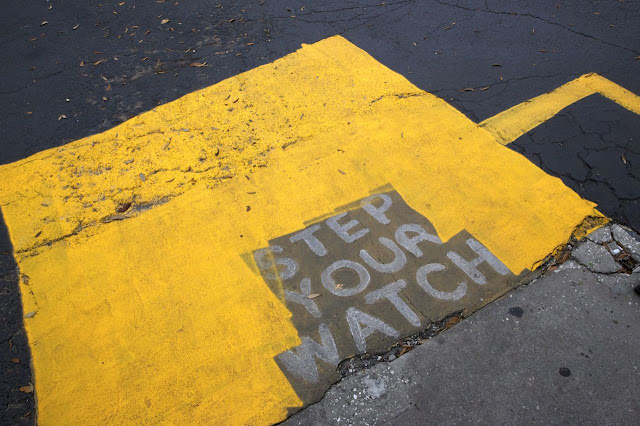 Village Inn is an old standby from childhood. As Dad joked yesterday, it was the site of many dramatic family conversations. (It's where I came out to him back in 1985, for one thing. Never did I envision going there 30 years later with my male spouse!) It was free pie day, and even though I didn't want any pie, the parents insisted I get my free piece so they could take it home and eat it later.

After lunch and the movie Dave and I made a brief circuit of University Square Mall, where I spent much of my youth and bought all my clothes. It's had its ups and downs in the intervening decades but it's on the verge of a major makeover. Yesterday I got a belt (because I forgot mine in London) and a few new pairs of shorts, because it's so freaking WARM here and I brought mostly long pants.

Finally, last night, Dave and I accompanied my stepsister and her husband to a trivia game at a neighborhood bar. They go every week, and Jennifer has been trying to draft me for her team each time I visit. So I finally tagged along, and indeed we won handily. I couldn't believe it when the 45-point Brain Challenge (or something like that) question was, "Bibendum is the real name of which corporate mascot?"

Bibendum, you may remember, is the name of a restaurant in London -- in a historic old tire company building with huge stained glass windows of the Michelin Man. Hence, we knew the answer. When I jotted it down and handed it in to the quizmaster, she said, "How the hell did you know that so quickly?"

What can I say? I've been around.

(Top photo: A barbecue trailer in North Tampa. Smoked mullet, anyone?)
Posted by Steve Reed at 11:32 AM

Smoked mullet is the best.
I would have known the answer to that too as Mr. Moon used to sell Michelin tires. Too bad y'all can't experience Hank's trivia. He is the trivia master!
Ah. The Village Inn. How strange and wonderful and completely normal to be able to go there on Pie Night with your husband. I love that!

In the puzzling road picture the word "on" has obviously been obliterated by the yellow paint. Hence, it was originally an instruction to "Step on your watch". This is a good way of testing the reliability of wristwatches and is used extensively throughout Switzerland.

when the game Trivia came out my sister and her husband bought one and would want to play it whenever my husband were over for the evening. we always beat them handily since between the two of us we knew all sorts of bizarre things. eventually they wouldn't play with us anymore.

I'm looking madly for the particulars in the e-vite and cannot find it or them...please e-mail ASAP so I can make arrangements. Thanks.

It tickles me to no end to know that I would have known that answer too! I had dinner at Bibendum's in London years ago. But, if I didn't travel so much I probably wouldn't have known it because it certainly is n't talked about here in the states.
I haven't seen Star Wars yet.

Trivia King! Why am I not surprised.

Oooh, I'd have known that, too! Here in Nova Scotia we have a couple of Michelin tire-manufacturing plants. Congratulations on your win :)