Fog, a Crown Roast and a Courthouse 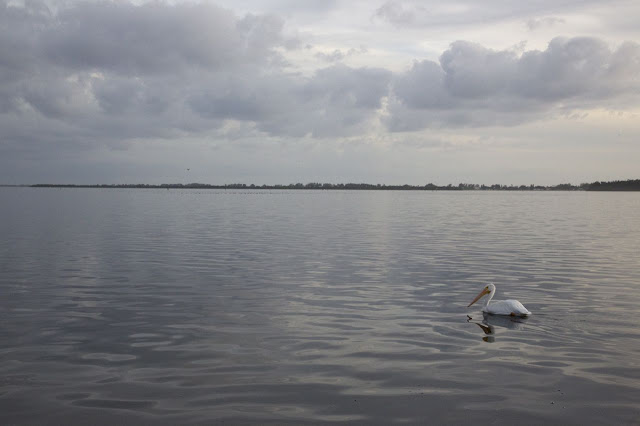 We are almost done here in Florida. Getting close.

Yesterday Dave and I were up early and headed back to Bradenton. First we picked up my friend Sue, our party co-host, who needed a lift to her weekend place on Anna Maria Island. It was the least we could do, given all her help the day before! We stopped for my essential morning coffee at a Dunkin' Donuts drive-through, and drove down without any trouble despite fog that blanketed the Sunshine Skyway and made a kitesurfer in the bay seem like an apparition of a prehistoric bird.

After dropping Sue off, Dave and I met his family at the Cortez Cafe for breakfast. Then it was a day of cooking and chatting at their house. I didn't get outside once because it was too bloody hot. It really is like summer around here. It's ridiculous, although apparently a cold snap is due in a few days.

I talked with Dave's sister Chris, who lives in South Dakota and who I'd never met before this week. Meanwhile Dave and his sister Dawn made a pork crown roast, the kind that stands in a circle with little paper booties on all the bone-ends. Our booties were the colors of SweeTarts.

We left his parents with a boatload of leftover wine from the party, as well as some food. We hit the road last night and came back to Tampa, and now we're at Le Meridien, a hotel in the old downtown federal courthouse. I wrote about it briefly when I visited back in February, but I've never had a chance to stay here before now. It's really different. A bit institutional with its marble hallways and high ceilings, but that's the whole point -- I love the fact that so much of the old building was preserved.

This morning I have got to get out for some exercise. My head is spinning from all the socializing, so I could use some alone time, too.

Happy New Year, everybody! I'll report back tomorrow, in 2016!

I may have been on two planes yesterday, but I think you may have me beat with all the socializing! good grief. sounds like it's going well, but I hope you get outside for some solitude because I'm tired just reading about all of your social engagements. glad the party went well and the pictures of all the old buildings have been amazing. great stuff.

It's been so nice, following you and Dave around on your grand adventure. Now- safely home and let us all have a good year of new beginnings and old loves.

I'd be tired of all the socializing myself. soon over though and back snugged into your little home.

It's funny that you mention how hot it is there because it's unseasonably cold here in the desert. I guess there is strange weather everywhere. Here's to a very happy new year for all!

Best to you both in the New Year!

Just been catching up with your latest posts. You seem to have made the most of your Florida time and I note that the wedding party was a great success. I wonder how it will feel returning to January in London. Happy New Year Steve!

I love to see people but find it draining so I understand very well your need to recharge. You two have been on a fast train since you landed! Safe trip home and wishing you all the best in 2016.

Happy New Year! Thank you for letting us in on the wedding adventure trip and all your wonderful photos. I've followed for much longer than I've commented :)

Mike & I have been trying to avoid each other since we came home - too much togetherness for the past three weeks! Never fear - I'm off to church on Sunday & to work on Monday. That should help our relationship considerably :)