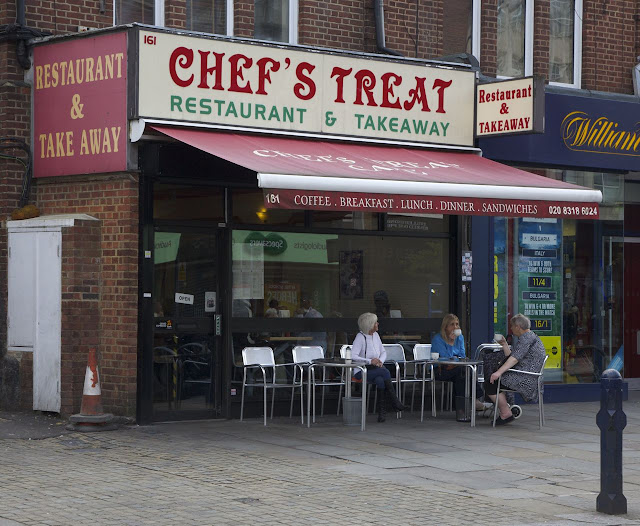 I just wrote a lengthy post that began with San Bernardino and discussed all my doubts about the condition of our world -- the guns, the economy, the scramble for resources and wealth, the prospects for the future. And then I published it. And then, just as quickly as I could, I unpublished it.

Because what do I know?

Remember how grandmothers used to say "If you can't say something nice, don't say anything at all?" That's kind of how I feel this morning. I mean, we all NEED to say something in certain venues -- like at the ballot box. But I'm not sure that my own personal (ultimately quite pessimistic) views about the future of the planet contribute in a meaningful way to the conversation.

And I don't want to be part of the engine of gloom. That doesn't mean I'm looking the other way. But maybe a better role for me is to just put up my pictures and talk about my life with Dave and Olga and offer a reprieve from all that.

So, be glad you have been spared. Kind of.

Unfortunately, there's not a lot to talk about regarding life with Dave and Olga this morning. The houseplant carnage has not been repeated -- we're thinking that it's best to bring Olga with us when we go to bed, rather than leaving her out in the living room and allowing her to make her own way to us on her own time. Less chance of a late-night encounter with Foxy Fox that way.

We watched "Homeland" last night -- it's making less and less sense to me these days -- and we discussed the planning of our Florida trip in December. It's growing increasingly complicated. Families!

(Photo: Lewisham, South London, in September.)
Posted by Steve Reed at 7:35 AM

Well I for one would have been interested to read your reflections upon yet another tragic American shoot out and I am therefore disappointed that you resorted to self-censorship.

I guess I just feel a sense of fatigue, frankly. I've expressed anger and frustration at American gun laws for years and years but it doesn't really do any good and I'm just not going to tie myself up in knots over it. Most everyone I know who reads my blog agrees with me anyway. It would be preaching to the choir.

My way of dealing is withdrawal...there is a lot I could say about some crazy-assed person mowing disabled people or any other people down with guns but as you point out, it has all been said, shouted, cried over and prayed about before to no avail as dem wot leads remain deaf and increasingly stupid. Personally, I'm sorry not to see Olga this morning. At least she is a happy creature.

Steve - I have just discovered that you are the MP for Croydon North!
See http://www.stevereedmp.co.uk/
In your website you say, "In my spare time I enjoy cycling, camping, walking and cookery. I have taken part in the 60-mile London-to-Brighton bike ride several times to raise money for the British Heart Foundation. I live in Croydon with my partner and two cats we rescued as kittens after their owners abandoned them."
I was just wondering how does Olga get on with the two cats and why haven't you blogged about them? Are you ashamed of them?

I know what you mean. I'm really so weary of writing about it all and mostly I haven't been but like you it doesn't mean I'm looking the other way. I'd love to read what you wrote though. I always appreciate your take on things. It so grounded and even when I don't agree with everything you say, I still appreciate it because it's coming from such a bedrock good-human place. So put the post back up if you feel like it. I'd love to hear your thoughts. I probably share most if not all of them!

York: Excellent! I am glad to see that I've "called for an end to the cruel dog meat trade." (Does that mean meat FOR dogs, or meat MADE OF dogs?) I am also a former mayor of Harrisburg, Pennsylvania, where I was indicted for corruption.

(Well, with a different middle initial. :) )

Well, I did read your post because it was in my blog-feed and I thought it was reasonable and fine. But I understand your need to stay positive, to write about that which you know and love. Sometimes I just feel too full of anger, probably, to stay quiet. And that's okay too. One day Bruce Springsteen, the next gun control.
This is life. This is our lives.
Good plan on Olga.

I totally understand. I succumbed.

I respect your choice - and sometimes we have to step away from the conversation, for sure - but as others have said, I also respect your opinions and thoughtful reasoning, and feel that I benefit from reading what is written on big topics like these by intelligent bloggers such as you. So, either way, I will read and benefit from coming here.

And there can never be too much Olga here for me, so if you're having a slow day ... :)

Is there a factory somewhere where they churn out Steve Reeds - a bit like Mattel's Ken dolls? I guess it's in China.

Now I'm really curious about the rnt you threw away. Some of the things going on have to be called for what they are.

MP AND a Mayor! Very good! About two weeks ago I read an obituary for my maiden name. Facebook is chock full of venting, blog world is much more gentle, sort of a safety zone. Thank you.

I watched the first season of Homeland but eventually couldn't bear Claire Danes. I know she's talented, but she's so horribly self-conscious, and I think I'm just annoyed by her. And by terrorism and all the hoopla about it.

I never tire of your pictures, though, and your life with Olga and Dave. Keep them all coming!

What can I say? Everyone else has said it all and that Pudding fellow, he's gone overboard today, hogging the comments!

I sometimes have reservations about saying only nice things or nothing, as I feel it lets people off the hook. However I do understand your viewpoint.

Some days the whole damned world is just too difficult.