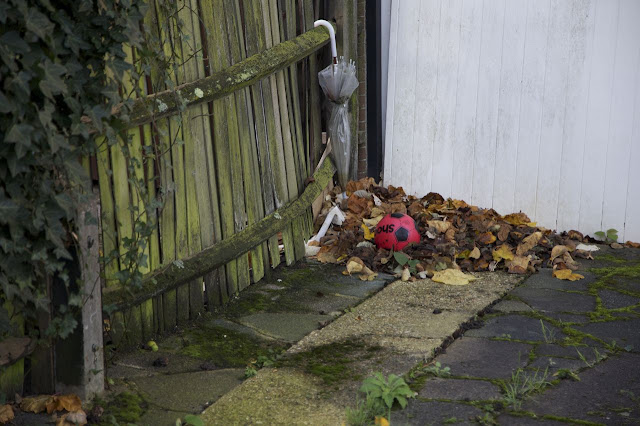 I just finished Patricia Bosworth's fascinating biography about the life of photographer Diane Arbus, who is famous for wandering New York in the 1950s and '60s, taking photos of peculiar characters. Her images are often said to capture and accentuate the grotesque aspects of humanity, though she resisted the idea that she only photographed "freaks" and did not want to be known as the "freak photographer."

Toward the end of her life in the early '70s, by suicide, she began to believe she was losing her ability to "capture a person's soul" with her camera. She felt like her newest work didn't reveal anything about her subjects.

But she had a lot of demons of her own, going back to her girlhood as the daughter of a wealthy Manhattan department store family. She was prone to depression, as was her brother, the poet Howard Nemerov, and she often seemed fixated on physicality and sexuality, and would flirt with and manipulate her subjects to get them to give her what she wanted. As the rather overblown back-cover copy on my mid-'80s edition said, "HER CAMERA WAS THE WINDOW TO A TORTURED SOUL."

I came away thinking I might not have liked her very much. Which makes sense, in a way, because her pictures are not my favorite, either. Portraiture has never really been my thing, and the idea that you can reveal a person's inner character through a portrait seems like folly to me. You can say something about them, yes, and you can try to capture the moment their "mask slips," as Arbus put it, but what they reveal may be no more than a passing mood or reaction. I'm not sure it's an inner constant. Why is it significant to annoy your subject enough to get a photo of them pursing their lips or grimacing? Part of why she became so frustrated with her own work, I think, is that she expected more from it than it could give.

She also shot in a style that doesn't appeal to me much -- occasionally dark, grainy images with slightly tilted horizons and cluttered margins. She's not as slapdash and immediate as Robert Frank and Garry Winogrand, but like them, she seemed to rebel a bit against the neatly composed image. I, on the other hand, am very into neatness -- and where she was interested in exposing grotesquery, I'm more interested in accentuating the beauty of the routine. So we have different objectives, I guess.

(Photo: Our neighbor's driveway, on Wednesday.)
Posted by Steve Reed at 6:18 AM

Your neighbours' driveway looks pretty grotesque to me Steve.

I used to feel similarly about Arbus, although she's grown on me from repeated viewings in photo classes. I'd call my current attitude "distant respect". I don't want to be her but she was a master of her own style and goals. I adored that biography, what a compelling and sad character she was.

Coming out of the fifties, the carefully coiffed, pinched, proper, tidy, symmetrical,sterile, as it should be fifties! I have always appreciated Arbus and her step into the other. Loved that she made the others feel great about having their photos taken, They shine! And they do tell stories, there is a lot of compassion in her work even though she herself was very likely mad, self serving. She has contributed so much to photography and history and to "freaks" (on the inside) like me, a closet freak! Cora Pratt would probably NEVER held still for a camera, and smiled so large with her terrible teeth had it not been for Diane making her feel like the Queen of France! Arbus did good work. one of my faves!

We are all drawn to different styles, aren't we?
Arbus's (is that right?) always scared me and I suppose that can be a function of art. But I still don't feel comfortable, viewing her photos.
I think that her photos revealed more about herself than her subjects.

I was interested in the link to the wikipedia article, and after reading it I wondered if you already knew that the biography you read was an unauthorized one, and had been criticized for not having good sources? Interesting post and new art to me, so thank you.

Who always presented another, very different portrait perspective. I find her photos to be on the confronting side.

Jesse: She definitely had a vision and pursued it. As another commenter says below, I think her portraits often say more about her than about the people pictured! "Distant respect" is a good way to put it. That's about where I am, too.

Linda Sue: It IS true that at the time she was quite revolutionary, so that's a good point!

Ms Moon: I suppose it's actually a positive thing that people react strongly to her work, even in a negative way. The book mentioned some viewers spitting on her photos at the Metropolitan Museum of Art (or was it MoMA?) during her first museum show. It's hard for me to imagine being THAT riled up! You are EXACTLY right about her photos saying more about her than her subjects.

Jenny-O: Yes, I know the book was done without the cooperation of some of Arbus's closest compatriots -- mainly her ex-husband, Allan Arbus. I suspect they wanted to write their own books, and maybe they have. But it still seemed very thorough to me.

Ms Soup: Exactly -- she was confrontational, both with her subjects and viewers. It's not a personal style I could ever embrace!

I was alway intrigued by Arbus and her subjects. I do think all art reveals more about the artist than the subject. This is a fascinating reflection on your response to her and her work.