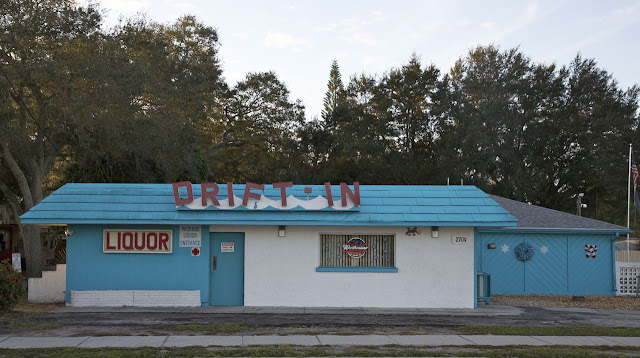 I love this part of Florida, near Bradenton and Sarasota. The greenery gets more tropical, the sun seems brighter, the water shines all around. It's easy to feel the slightly kitschy, old-Florida tourist vibe -- and I mean that in a good way. I lived in south Sarasota and Venice for six years in the '90s, and visited often all my life, so I know the area and it holds many good memories for me.

Yesterday Dave and his parents went to see "Star Wars." I bowed out, having already seen it last week, but Dave is such an enthusiastic sci-fi fan that he was ready to go again. I spent the afternoon relaxing at his parent's place. I almost finished the book I've been reading in fits and starts, and I walked along the seawall by the bay taking photos. 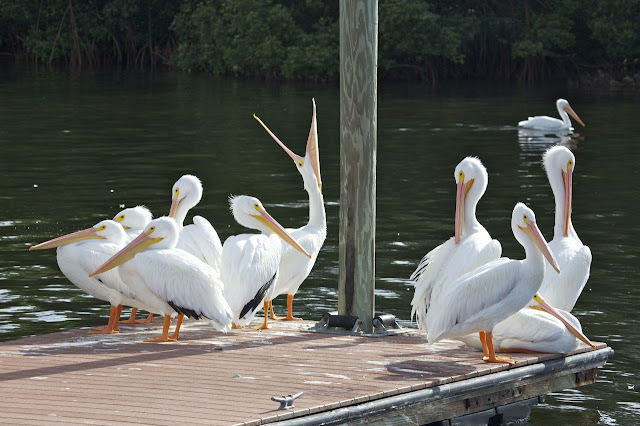 I never got a picture of a mullet -- they weren't jumping yesterday, maybe because the wind was up and the water seemed choppier. (I haven't the faintest idea why mullet do or do not jump.) I did, however, find some picturesque pelicans. I'm pretty sure I also saw a roseate spoonbill in flight -- a big pink bird, which in these parts generally means spoonbill -- but it was fairly far away and I didn't have the camera ready.

One of Dave's sisters flew in last night from Michigan, and we drove up to Tampa to pick her up. We came back to Bradenton and went to dinner at a local seafood restaurant, where I continued the slightly kitschy Florida theme by ordering coconut shrimp. Even though they're fried and somewhat sugary -- especially when accompanied by apricot-and-horseradish dipping sauce -- I firmly believe that you just cannot go wrong with coconut shrimp.

This morning Dave and I are driving back up to Tampa to meet some friends, spend more time with my dad and get ready for our party tomorrow. It's a good thing I don't mind being in a car!
Posted by Steve Reed at 11:38 AM

Those pelicans are so great! My favorite bird, I believe. They're so goofy and prehistoric and huge.
You are right about coconut shrimp. Can't go wrong. Good Lord, but it's good.

love the picture of the pelicans! I remember when they all but disappeared due to DDT? anyway whatever was done to bring them back, bring them back they did. we don't get the white pelicans but I love seeing flocks of the brown ones fly low over the gulf. back when we had the beach house we would see a small group of roseate spoonbills fly over every morning and every evening as the went to their feeding grounds and then back home to roost for the night.

Erik said that after seeing the Star wars movie he immediately wanted to see it again, said it was fun, but after he mulled it over for about a day, realized that that was all it was. just fun and a second viewing would not be necessary. Looks like nice weather down yonder...It is shite here and probably in London ,as we generally have the same weather. Sorry for so much car time, but, you know...Merika!

I love the pelicans! Great shot.

Those pelicans are beautiful!

Seems amazing to me that you could just snap a shot of so many pelicans together. We don't have them here so I have zero experience with how they socialize!

The pelicans. In particular the pelican with its neck stretched and the blood vessels visible in the pouch; I can't decide whether it is cooling off or showing off.

Apricot and horse-radish dipping sauce. I think I'll pass on that one thank you.

And I just love your Florida photos with their theme of dilapidation.