The Cemetery, and a New iPhone 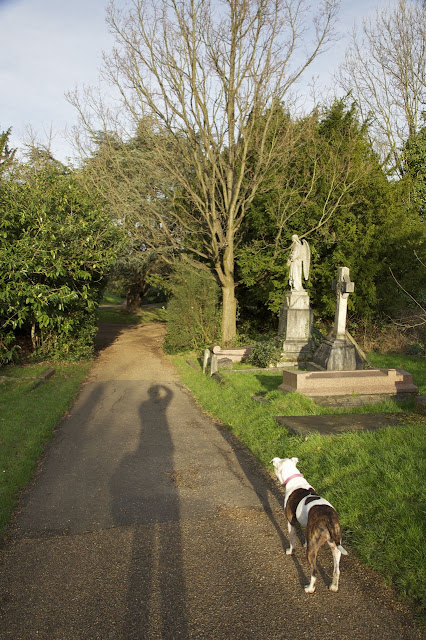 Well, I don't know what's going on health-wise. I felt better yesterday -- still tired but not as tired -- so I took Olga to Fortune Green and to the cemetery. It felt great to get out of the house and get some fresh air. I know Olga appreciated it. 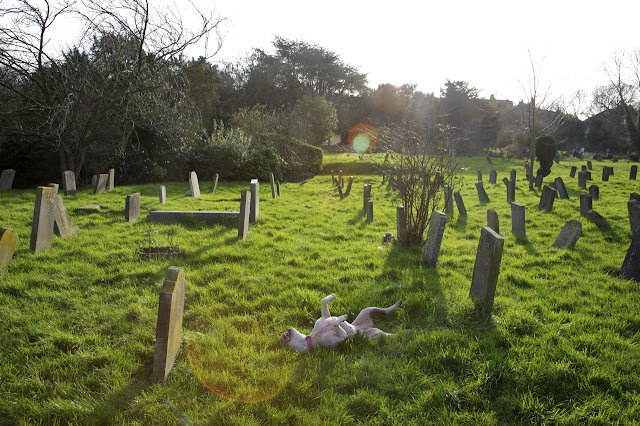 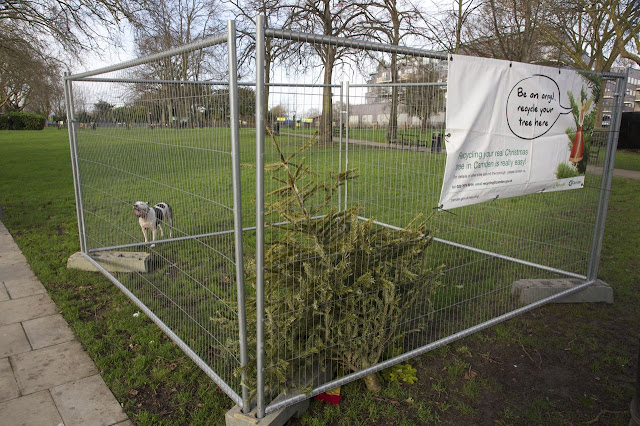 At Fortune Green, we saw a Christmas tree recycling enclosure with a sad little tree already abandoned inside it. (Well, Olga didn't think it was sad. By the look on her face, she found it hilarious.) If we weren't traveling I'd grab that tree, bring it home and decorate it, a la Charlie Brown.

In the afternoon, Dave and I went on a mission to get him a new phone. A work colleague spilled mulled wine on his old one, much to Dave's delight -- he'd already been angling for a replacement. (In fact I'm not at all sure Dave didn't douse it with wine himself.) We traipsed down Finchley Road to the Vodafone store, where we met with a very chatty salesman who presented us with a surfeit of options -- various data and calling plans combined with various phones, all with different up-front and monthly charges. He did a great job explaining everything, but good grief! In addition to phone plans, he told us all about telecom regulations and corporate telecom network purchases, as well as -- surprisingly -- cage fighting.

About an hour later we emerged with a new iPhone 6S and a fancy data plan, as well as an insurance policy should the phone be lost, damaged or stolen (a policy I'm taking with grain of salt given Ms. Moon's recent iPhone travails).

I thought about replacing my ancient iPhone, too -- the iPhone 3G Dave bought me in 2009 -- but the truth is, it's fine for talking and texting, and that's all I ever do. So I'm holding out for now.

We also thought about going into town for a new computer, but neither of us felt up to that task. I still think I can squeak a few more months out of this one. I'm all about pushing my electronics to their utmost limits!
Posted by Steve Reed at 7:24 AM

I am so glad you are feeling better. I imagine you are getting all ready to leave for your trip.
And when you DO get new electronics? You are going to be so thrilled. I'm not even kidding you.

What with the suspense of worrying about your plague ruining your trip, I'm beginning to open your posts with the same keen anticipation that I usually reserve for John Gray and his dogs in Wales. I'm happy you're upright again and able to take Olga out for a romp.

love the cemetery shot of olga rolling. the headstone angles are crazy looking.

glad to hear you are feeling better. I still have my flip phone which is very old but I'm OK with it. all I use mine for is phone calls and texts. I'm not going to play games or watch movies on my phone. the gps would be nice but I just look up my route in advance if I don't know where I'm going. my husband has an iPhone and one in the family seems enough though he keeps saying he is going to get me one but so far hasn't followed up on it.

I love seeing the sunshine in your photos today and I'm glad you are feeling better today too.

I'm glad you're both feeling better and hope it stays that way!

That looks to be quite an old cemetery. And Olga in the grass - clearly happy!

I also recently got my first iPhone, and while I do love it, going to the telecommunications store is one of my least favorite and most bewildering activities. Honestly, the whole thing seems like a giant scam that we're helpless to combat or question.

That photo of Olga in the cemetary is extraordinary.