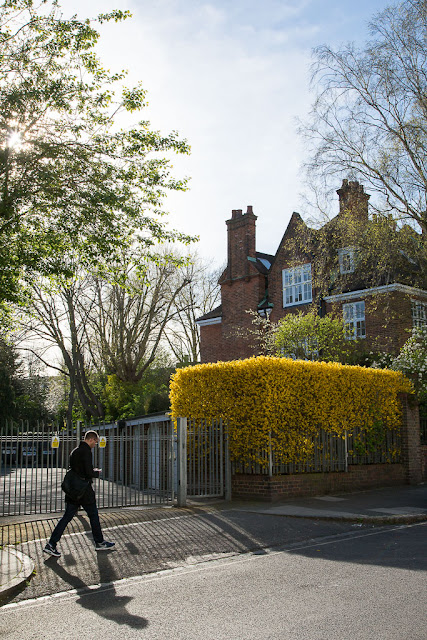 Thanks for all your kind words about Dave's health. (Dave thanks you too.) We're still in a holding pattern, allowing the antibiotics to do their thing.

I worked a full day yesterday, after stopping by the hospital in the morning. The best news of the day is that I found a mode of public transport -- overground train -- that gets me from West Hampstead to the hospital in just two stops! It wasn't immediately evident to me, and I had been using a bus that takes a circuitous route "round the houses" (as the British say) to get from here to there. Or I walked, which is direct but hilly.

Now I know I can hop on the overground and be there in minutes. Woo hoo!

Work was uneventful. I tracked down a missing library textbook by searching some high school classrooms -- and I know it sounds minor but finding it was a huge triumph. That missing book has been nagging at me for weeks, and despite my polite (and less polite) entreaties and reminders, the student who checked it out wasn't lifting a finger to return it. So, problem solved. No textbooks for her for a while. (Insert cracking whip sound effects here.)

I also sent a rather, shall we say, forceful e-mail to a teacher asking for the return of a computer charger he'd had out for more than two months. Probably a little too forceful, truth be told, and I apologized for it later -- but hey, the charger came back! (More cracking whip sound effects.)

Ah, the life of the librarian.

The day was crisp and sunny and blue, so after work I walked about halfway to the hospital, taking photos as I went. I spent a quiet evening at Dave's bedside, both of us working companionably on our computers. Modern love!

(Photo: A forsythia hedge in Belsize Park, yesterday afternoon.)
Posted by Steve Reed at 6:43 AM