Finding Clothes in the Woods 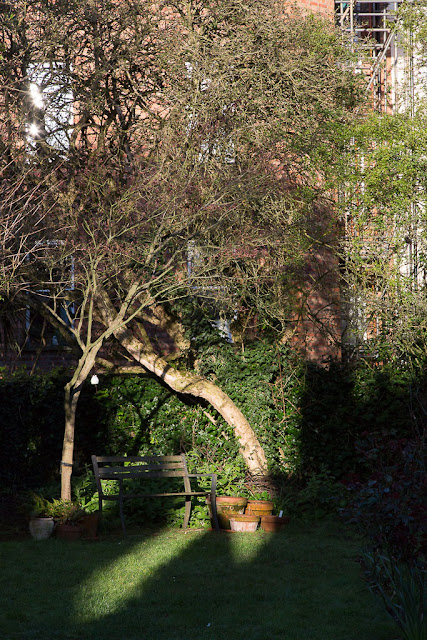 Last week, all I heard from people at work, from about Wednesday forward, was how horrible the weather was going to be over the weekend. I assume this came from the forecast, though I never looked it up myself. I'm happy to report that instead, it was sunny and beautiful both days!

The sun created some interesting patterns in our back garden, and it provided the perfect atmosphere for walking on the Heath with Olga. I took her back yesterday and we had a bit of excitement.

(Let me just say in advance that I realize this post will make me seem completely insane, but, well, it is what it is.)

When I walked Olga on Sandy Heath on Saturday, I found some discarded plastic bags that had been recently thrown from the roadside into the woods. You know how fascinated I am by rubbish, so of course the dog and I had a closer look.

They turned out to be mostly empty, but some had been torn open to reveal clothing -- two pairs of shoes, three shirts, some gloves, a winter coat and several sweaters (or "jumpers," as they say in England), among other things. The sweaters were still folded, as if they'd been taken straight from someone's drawer.

Well, I left everything there and kept walking the dog. But during the night on Saturday I kept thinking what a shame it was that those perfectly good clothes, which had obviously been there just a day or two, were left to rot in the woods. So yesterday, I took a bag with me, and Olga and I revisited the same spot. I decided to collect anything that seemed useful and take it to charity. 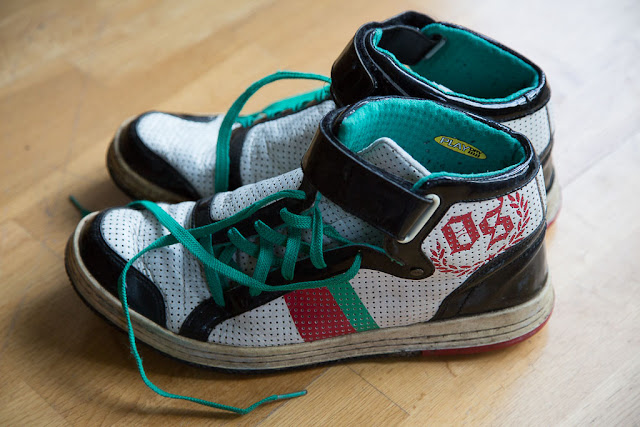 I didn't take everything, because some items really were trash -- old and worn, or stretched out. (And nobody wants used socks, after all -- ugh.) But I took two perfectly good dress shirts and a white printed t-shirt. I brought them home, washed and dried them, and I'll take them up to Oxfam later this week.

I also salvaged these very bizarre shoes -- Reeboks, as it turns out. Size 11 1/2. They've seen some wear but they're so unusual, they might be thrift store gold!

So yes, I'm crazy. I just can't stand waste, not to mention fly-tipping. If there were a public trash receptacle somewhere nearby I'd have picked up the rest, put it in a garbage bag and left it for collection. In fact, that might be a future project...
Posted by Steve Reed at 6:45 AM