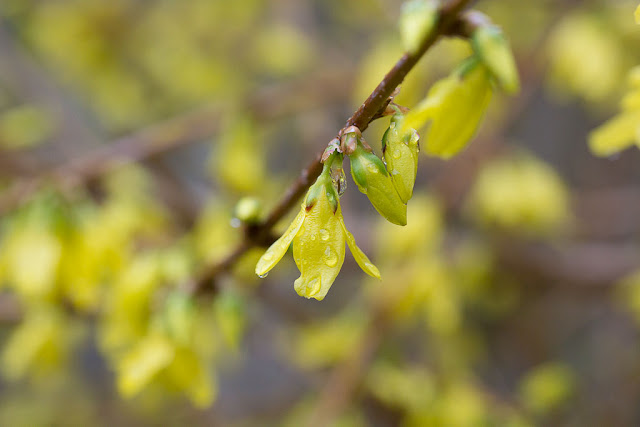 The forsythia bush outside our bedroom window has come into bloom. This bush had been severely pruned when we first moved in here, two years ago, and it barely bloomed last year. But this year it's looking much better. 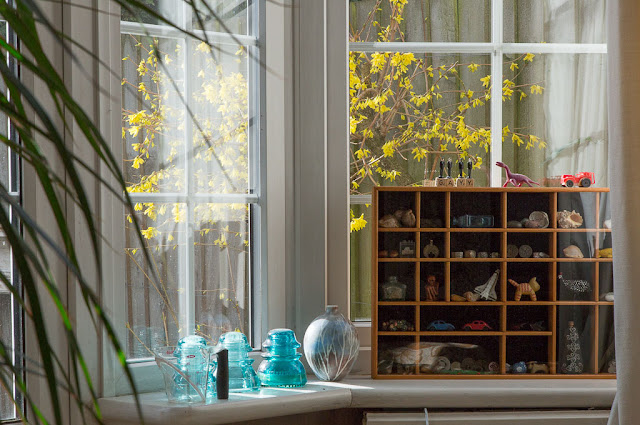 When I'm lying in bed in the afternoon, reading, as I was yesterday, this is the view I have out the window. A bright yellow reminder of spring!

(We don't normally store a measuring cup on the windowsill -- it was sitting there because we'd used it to fill the squirrel feeder.)

I didn't get nearly as much reading done yesterday as I'd hoped. I spent the morning editing and archiving photos, which took a couple of hours. And then I took Olga to the Heath, where she had a long romp.

Last night, Dave and I went to Pollen Street Social, a restaurant we've wanted to try for a while. We've seen the chef on Saturday Kitchen, a popular BBC cooking show, and the food was fantastic.  (Tiny little cucumber cupcakes, and langoustine with fresh peas, and fresh spring lamb, and a goat cheese sorbet that danced between savory and sweet.) We were not disappointed. But after eight courses with wine pairings, it was all we could do to roll ourselves toward an open taxi and, a short time later, fall into bed!
Posted by Steve Reed at 7:35 AM