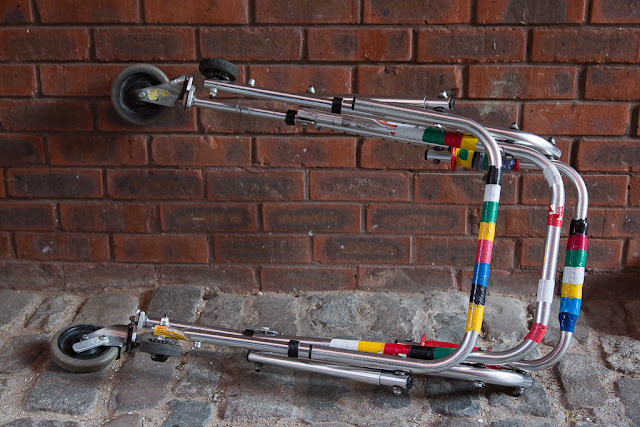 Months ago, while walking Olga, I saw this walker propped up outside a modest council flat in our neighborhood. I loved the tape wrapping and its well-used condition, which seemed to say something about being cheerful in the face of adversity -- making a utilitarian tool, a symbol of disability, into something colorful and even fun. But of course I didn't have my camera. No problem, I thought. If it's there one day, it's likely to be there again soon enough.

And it was -- but only on days when I didn't have my camera. It was like the photography gods were playing cruel tricks on me. Over and over again, the dog and I walked past it on days when I was photographically unprepared. I carry my camera about 70 percent of the time, so as the weeks and months passed, the statistical probability of me continually not having it when encountering the walker began to seem truly outlandish.

(Walkers like this, by the way, are called "Zimmer Frames" here in England. Apparently this name comes from their manufacturer. The first time I heard someone refer to a Zimmer Frame I had no idea what they were talking about, and then I saw a photo: "Oh! You mean a walker!")

Anyway, finally, Olga and I came across the walker last week -- and I had my camera! Hallelujah! So I bent down to get a photo, and just as I clicked the shutter, Olga -- lurching after a cat, or maybe the ghost of a cat, or some hallucinated cat that only she could see -- pulled me off balance, causing me to fall against the front door of the flat in question. Mercifully it was locked, or at least latched, and didn't burst open -- but I'm sure I caused a resounding thud inside the apartment. I didn't wait to take a picture. I got the hell out of there before someone yelled at me.

Was I fated to never get a photo of this stupid walker?

At this point, feeling absurdly challenged by the universe, I began carrying the camera every day. And at long last, Olga and I again found the walker unattended yesterday morning. She did not pull me off balance, and I got my photos.

And that's the longest story about nothing you're likely to read today. 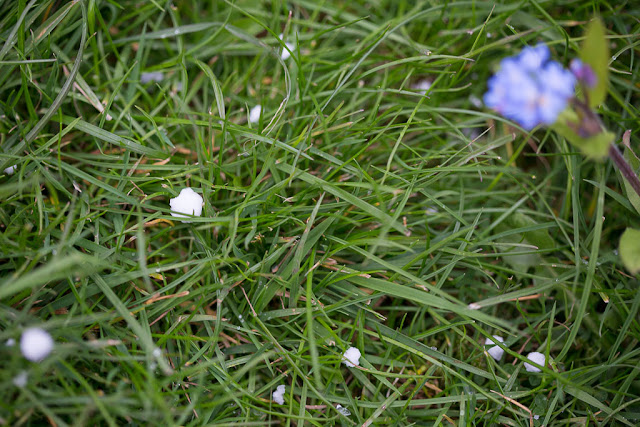 We have had very weird weather. Yesterday morning was biting cold -- like, wintry cold. Heavy coat weather, with cheek-slapping wind. And after I came home from work, a strange meteorological phenomenon occurred. It was like God was spitting spitballs at us: little chunks of snow, about the size of a pea. Not quite hail, but definitely not rain. They spattered on the patio and bounced around on the lawn, beneath the forget-me-nots, like little bits of styrofoam.

I've since learned that this is called graupel. At least, I think so. I am not a hail expert.
Posted by Steve Reed at 5:21 AM

I dreamed last night that it was going to snow here. Of course I was worried about...chickens.

Well, it's a great story about persistence! England has many different terms that are strange to us...car park!

that's a lot of perseverance for one little photo.

It was worth persevering!

I didn't know they called graupel either, but I certainly expeienced some yesterday. It was like being showered by someone crumbling polystyrene packaging from above.

That is a strange weather phenomenon. I wonder why it's so cold there. It's almost May, surely it should be getting warm soon. Your comment about the longest story about nothing made me laugh out loud. I'm glad you finally got the photo. It made me smile.
On another note, I heard a story on the news about "junior doctors" being on strike in the UK. I'm not sure what a junior doctor is exactly but I was wondering if it will affect Dave's scheduled surgery.

Love the story! It became a mission to get that photo & I'm glad you succeeded :)

I didn't get to mow yesterday - pouring rain - and today it's a bit chilly for mowing, but darn it I'll have to get out there anyway. Praying for no graupel!

"longest story about nothing" is what I fear I will end up being known for ... yours however, was funny and made me laugh :)

With all the snow we have here, I have never seen or heard of graupel. But if it does fall, I'm now ready to talk about it, thanks to you!

If they squish between your fingers, it's graupel. If it's hard, it's hail! Oh Hail yes! Graupel happens a lot in Colorado. Something to do with the atmosphere at the time.

I'm intrigued that you didn't just snap the walker with your phone in the interim. You're a purist, my friend. That's a compliment.