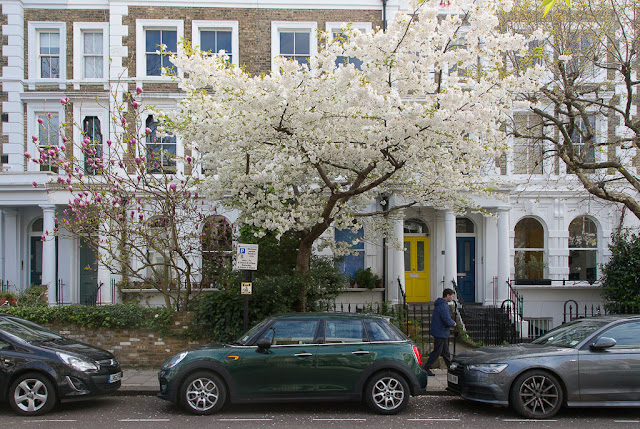 I didn't mention that when Olga and I walked on the Heath on Sunday, she once again dropped her Kong toy into a deep, dark, leafy puddle. And once again I was forced to wade in and retrieve it, standing in the opaque water and feeling around with my hand.

I hate having to do that. I would never do it in Florida, where I grew up, because God only knows what could be living in a Floridian puddle. Here, at least, snakes are comparatively rare.

But after our walk, my ankles began itching, and sure enough I've been bitten -- on one leg particularly -- in five or six places. They could just be bites from mosquitoes or black gnats, or midges -- whatever those bugs are that gnaw on me in our back garden every year. But part of me wonders if I didn't pick something up in that puddle. I am resisting Googling "itchy spots bites puddle Hampstead Heath." I don't want to know.

In all the craziness of the past week or so, I also never mentioned Prince's death. I was not a huge fan. But I owned the "Purple Rain" album and there was a period in the early to mid-'80s when my girlfriend Barbara (this was a long time ago) and I spent many hours listening to it in her beige Dodge Omni. We went to see the "Purple Rain" movie -- a few times, I think -- and she adopted Apollonia's lacy gloves and dangly mismatched earrings. When I heard Prince had died, I thought immediately of Barbara and wrote to her on Facebook. It's strange to think we've lost another crucial element of the soundtrack of our lives.

I thought Ms. Moon said it best -- that like David Bowie, Prince "did not seem human. He transcended sex and race and gender and any sort of description. He was male/female. He was tiny, he was huge, he was a screamer, a whisperer, a musician who let loose the hounds of hell and the doves of peace."

His influence also reached into many corners of pop music in the '80s and afterwards. For example, most of us probably know that he wrote "Nothing Compares 2 U," Sinead O'Connor's huge hit. I just learned he also wrote "Manic Monday," which The Bangles made famous. And when Y2K rolled around, we literally partied like it was 1999, to that very song.