Nothing but Blue Skies 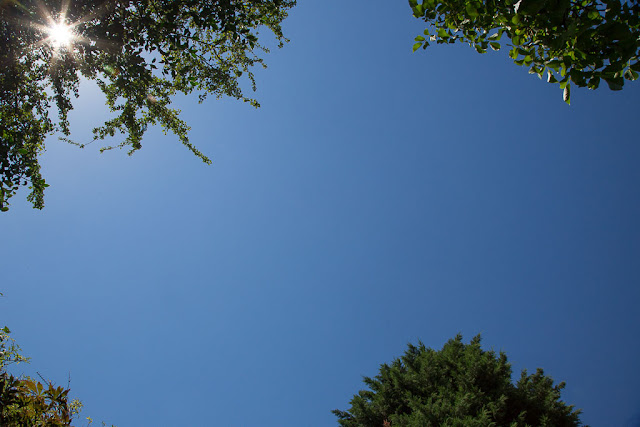 Yesterday was an almost absurdly beautiful day. There literally wasn't a cloud in the sky, which in England is unheard of! The high temperature, according to the Weather Channel, was 80º F, but it seemed a bit cooler. Maybe in our back garden it was.

I spent the day reading, finishing the last of the seven library books I checked out for summer. When I borrowed them, I thought, "There's no way I'm going to get through all these." But I managed!

(For one thing, I didn't count on four transatlantic plane flights, which left me with plenty of hours to kill. But on the plus side, I was just notified today that I have reached Bronze level on my British Airways Executive Club membership, which is the first time in my life I have been able to accumulate enough frequent flier miles to amount to anything. Supposedly some little perks come with this level, like earlier boarding and being able to pick my seat for free.)

Anyway, this last library book was the most recent Cormoran Strike detective novel by Robert Galbraith (aka J.K. Rowling). I do love those books. Page-turners, all. 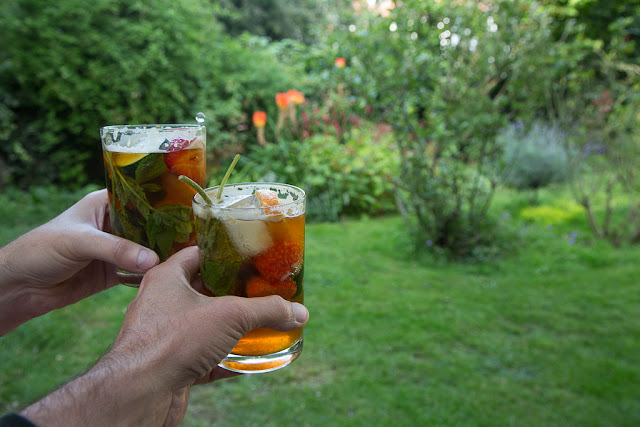 Remember that bottle of Pimm's that Dave photographed with Olga last week? Well, we've cracked it open and had a few Pimm's cocktails in the back garden. It seems like a nice way to end the summer. The taste of Pimm's is hard to describe -- it's a bit fruity and spicy, with a gin base, and traditionally mixed with lemon-lime soda and garnished with oranges, strawberries, mint and cucumber.

Last night we went to dinner with a friend from work, Colin, who lives nearby. We caught up on all our summer activities and some school gossip. Trying to get our brains into work mode, I guess! I'll be back at work next Thursday, and Dave next week as well.

Oh, and I belatedly realized that in all my Georgia O'Keeffe reminiscing yesterday, I forgot another of her exhibits that I saw -- a 2009 show of abstractions at the Whitney Museum, which I mentioned here. To be honest, I don't remember that show at all. If I hadn't written that I saw it, I would swear I didn't!
Posted by Steve Reed at 7:14 AM