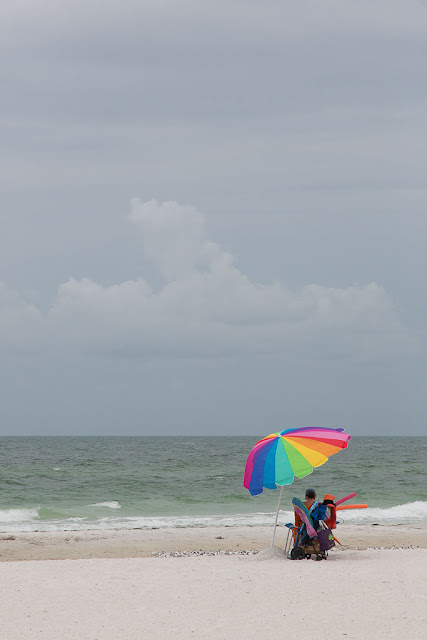 There's a big swirly rainstorm in the Gulf of Mexico, just to the north of us, so we're having a drizzly morning at the beach. It's not slowing us down too much -- I went out with Sue on her sea turtle nest patrol this morning. You may remember that she's a volunteer with the organization that monitors turtle nests on the island. We didn't find any new ones today but we had a good walk on the rainy beach, past several established nests, four or five wary herons and squads of frantic sandpipers and willets.

Walking is pretty much what we do around here. Yesterday Sue led me on what I jokingly called the "Bataan Death March," a 7.5-mile trek across a rumbly drawbridge and up the length of the island. I made the mistake of carrying a coffee cup and wearing sandals, and by the end I had a blister and I wanted more than anything to put down that damn cup. But, yes, the scenery was terrific. I can't really complain.

Then we had lunch in Bradenton Beach, had some beers at the beachfront Moose Lodge and browsed some thrift shops. I picked up a couple of souvenir glasses (25 cents each!) from the old Kapok Tree Inn, in Clearwater, which has been closed for years. I took my girlfriend there back in the mid-'80s -- I think we may have still been in high school at the time -- and we thought we were really swank. I think I even bought her a corsage. Anyway, I couldn't pass those up! I'm sure Dave will be thrilled, NOT.

We walked around more yesterday evening, and by the end of the day -- according to Sue's iPhone -- we'd walked more than 10 miles. I'm still tired!

Now John and Sue's dog Finnegan -- a long, skinny lab/greyhound mix -- is practically lying in my lap, demanding to be petted. He's such a funny dog. He looks alarmingly thin, but it's just his build. He's got the metabolism of a teenaged boy -- they feed him and feed him and he never puts on weight.

I'll be driving back to Tampa later today, and taking wing back to England tomorrow. I'm ready to get home and see Olga again! 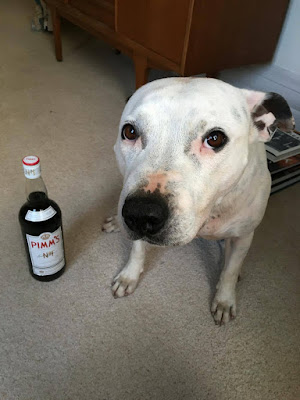 Dave sent me this picture of her, with a bottle of Pimm's. I think he's trying to make me miss home! (Doesn't Olga look guilty? She doesn't understand why she's being asked to sit next to that bottle.)

(Top photo: On the beach outside the Moose Lodge, yesterday afternoon.)
Posted by Steve Reed at 2:45 PM