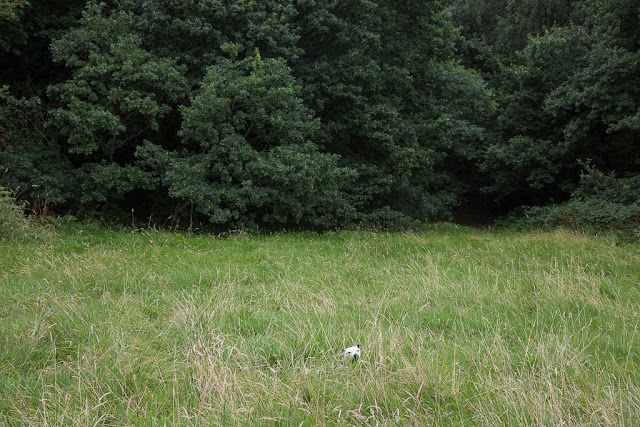 I took Olga on our West Heath walk yesterday, for the first time in about a month and a half. I was gone for so much of July that my dog-walking duties fell by the wayside. I only took Olga to the main part of the Heath once last month, and we were long overdue for a visit to the West Heath, Sandy Heath and Hampstead Heath Extension.

Olga wasted no time losing herself in the long summer grass. 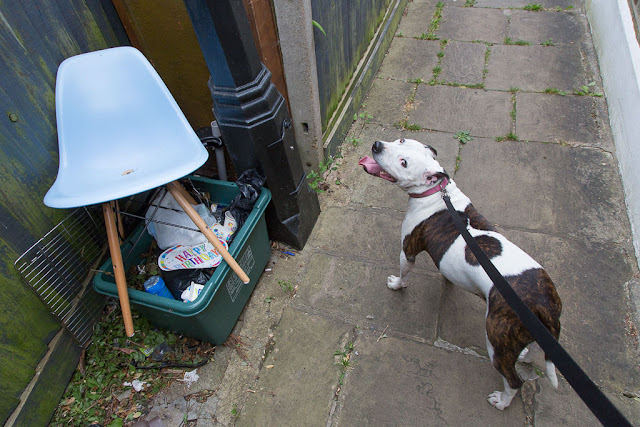 We found some interesting rubbish. Apparently someone had a birthday. Maybe their gift was a new chair? I didn't see much wrong with the old one, honestly, except a few missing screws -- I considered taking it, but we were about a mile and a half from home and that would have been a long way to carry a chair. 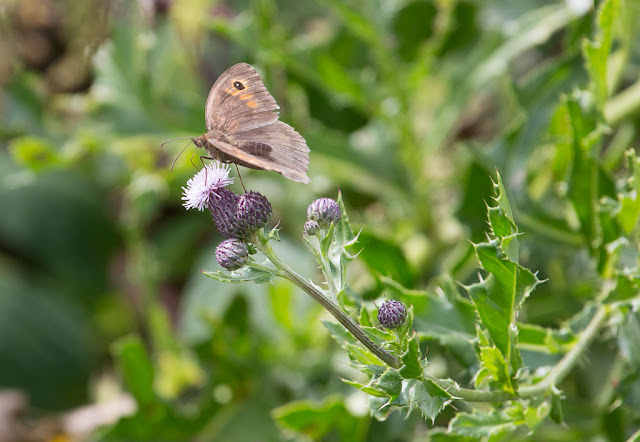 A few days ago I was commiserating with a blog pal about the apparent lack of butterflies this year. I don't know whether it's the climate or what, but I've only seen cabbage whites and an occasional red admiral. Yesterday I saw this meadow brown flitting among the creeping thistle on Hampstead Heath Extension. It's nothing unusual -- "probably one of the most common and widespread of all butterflies," according to this source. But it's better than nothing!

We also haven't seen anything like the ladybird (or ladybug, in America) larvae and pupae that we got last year. I suspect that's because we didn't release boxes of Internet-purchased ladybirds into the garden as we did last spring. This year I've seen just one or two larvae and no pupae. Dave wanted to release more, but I argued against it because they all just fly away -- but now I'm thinking we should get some next spring.
Posted by Steve Reed at 7:01 AM

"plagueofladybirds.com"
Create your own plague of ladybirds by purchasing a bumper box of laboratory-bred killer ladybirds. Release the superpowered insects into your local eco-system and watch Mother Nature tremble! Only £19.99 for 10,000. Add £10.99 for courier delivery.

How funny. I remember playing a cabbage moth in a 4th grade performance. I rustled around in a big brown paper bag from the cleaners.

I can't wait to take long walks again. I'm anxious for this desert heat to start to melt away but, we have weeks to go.

Seems to me that I've seen as many butterflies as usual here this year. But I could be wrong.

Just Thursday evening, I heard a master gardener discuss the purchased ladybugs. He made a couple of points. (1) If you have something for them to eat, e.g., a whole mess of aphids, they'll stay. If you have more beetles than aphids, they'll depart to find a better meal elsewhere. (2) If you get a pile of them, it's possible to release only a portion. Keep the rest in the refrigerator, in hibernation, until the others have disappeared, and it's time to bring in the replacements.

Just don't stir-fry the ones in the fridge.

I've been trying to photograph some of the moths that have been making their way into our house after dark. It's pretty much impossible with a point and shoot camera. But some of them are absolutely beautiful. So I'm enjoying your photos!

I just love that first photo of Olga. I've been missing seeing pictures of her :)

you are such a nut. and what would you do with that chair once you got it home?

I'm sure Olga appreciated the walk. we had lots of butterflies earlier in the summer.