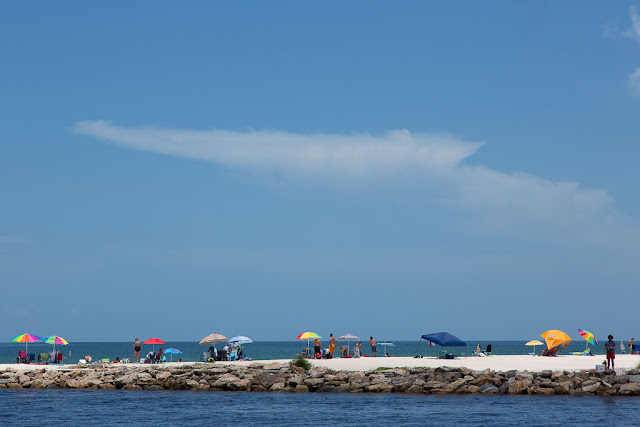 Yesterday we drove down to Venice -- me, my stepmother, my stepsister and her husband and son. A full car!

I lived in Venice from 1994-97, so I know the town and I was pleased to see that it hasn't changed much -- at least not on "the island," as central Venice is called. Some big new houses have been built and older, smaller ones torn down, which is a common phenomenon in waterfront communities all over the state. But overall the small-town atmosphere seems well-preserved.

We drove out to the Crow's Nest restaurant near the jetties that protect Venice Inlet, where we had lunch. (Seafood pot pie, in my case.) I love a nice seafood restaurant with big windows, iced tea and a water view -- a quintessentially Florida experience.

Afterwards we walked out onto the jetties, where the scenery was pretty but the temperatures were baking. 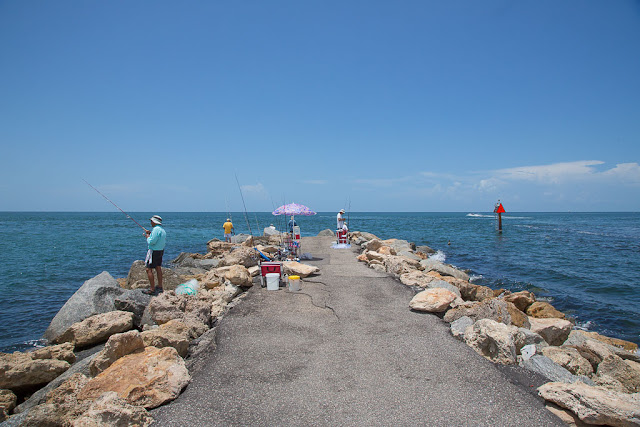 We retreated to the car and went downtown, where we walked into a few little shops. But we didn't buy anything and didn't stay long -- my stepmother wanted to get home to feed Pinky and Manny, the chihuahuas. I popped in to Venice City Hall for five minutes to see a few people I know from my days working there as a reporter (turns out there's only one person left).

Then we hit the road and came home via Casey Key, a narrow strip of sand featuring some incredibly large houses and wealthy occupants. We saw the house reportedly owned by Oprah Winfrey, though I don't know whether that's established fact or mere rumor.

This is the kind of trip my stepmother could never do with my dad -- not within the past decade, anyway. His health was too shaky and he didn't really like traveling, especially when it involved going over bridges. (He hated bridges.)